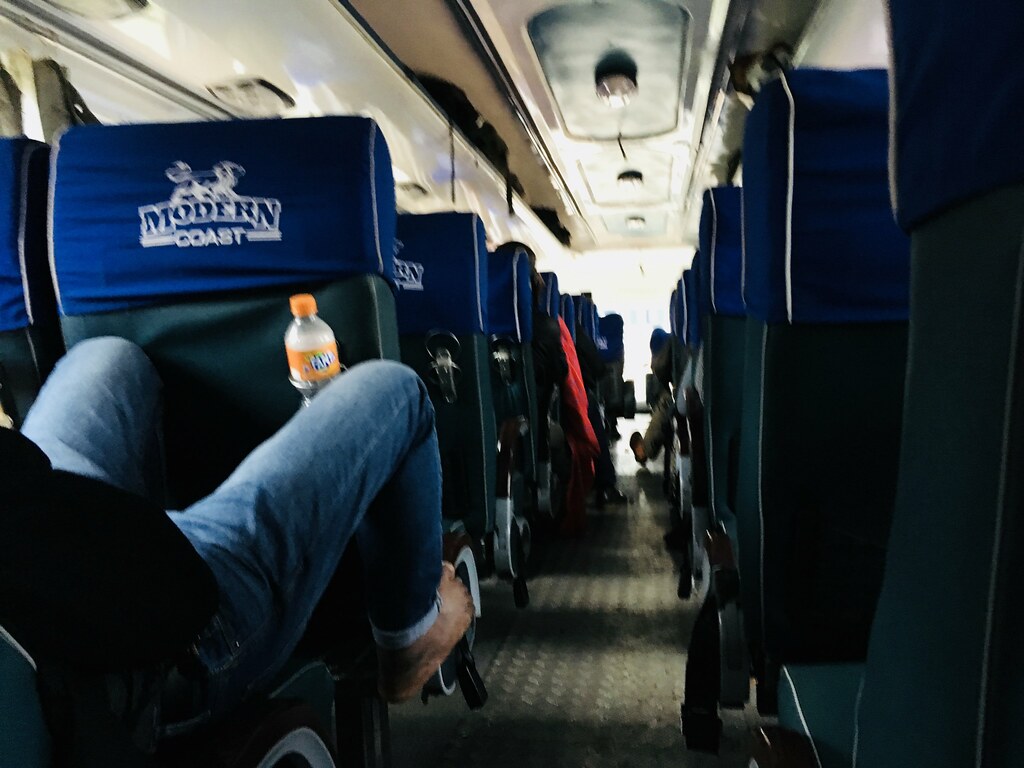 My Fitbit registered 17,000 steps that day, and yet, I did not walk. Also, by 10.30 pm, I have developed a vehement hatred for DJ Perez. How did all this happen? Let’s go backwards.

The Pre-Journey: Booking a ticket with Modern Coast Bus (1 day before)

I was researching buses from Nairobi to Kampala, and Tripadvisor suggested that Modern Coast was a VIP option. Well, it’s VIP relative to other options, which I’d summarize as Guatemala chicken bus – you might have someone sitting on your lap for the journey. For the price you pay on Modern Coast, you will have get an assigned seat, and nobody will sit on your lap (unless you want them to).

I tried booking the ticket online, but their credit card payment system was unavailable. Hence, I schlepped it down to their office in Nairobi. They actually have two offices, and for some reason or other, Uber drivers keep trying to drop me off in their shittier location, which is nestled amongst other buses leaving Nairobi as well. Why is it shitty? Well, in the 5 min I was there, I got asked by some asshole to “Teach me some kungfu”, and another guy tried to grope me. Not fun.

In the first location, I was told, cash only. I decided to try their main location, which is about 20 min walk from the first (shitty) location. Although they pasted the Visa/Mastercard logo outside, when I got to the counter, I was told, “Cash Only”. So, then I had to pull up a map, and tried to find a forex exchange on a Sunday (not a good idea). Fortunately, I saw a Standard Chartered ATM, walked in, got some cash, turned back, and bought my ticket. I got the third last seat (the bus ended up full). I bought a “Business Class ticket” (essentially their cheapest ticket) for 2400 Kenyan Shillings (~24 USD). They have more expensive options of First Class (3200 KES) and VIP (3500 KES). First class is wider, while VIP is even wider and usually solo seat with more legroom.

The Day of the Ride

I showed up at the ticket office at 6.30 am, and there was a bus waiting there. A good sign. At about 7 am, the bus driver checked off our names, and we were off on time. The VIP bus is … just okay, to put things mildly. There is a power outlet if you want to charge your electronics. Otherwise, it was rather dirty. But having seen other buses heading in a similar direction, it’s more VIP than other options.

The ride was bumpy, and I would say that it’s actually a good thing. Some of the bumpiness is from the condition of the Kenyan roads, but a significant portion of the bumpiness is from speed bumps along the road. Given the driving speeds and style of rounding corners at high speed, I’d say that this safety measure probably prevented a lot more automobile accidents. How bumpy was it exactly? Well, I have a Fitbit Flex 2, which basically measures significant vibrations as steps. On most normal car journeys, it registers a big fat ZERO. But at around 2 pm, I actually got awoken by some mad vibrations on my Fitbit (I set it to alert me when I hit 10,000 steps) – I had hit 10,000 steps that day, but I did not actually move.

The bus pulled into the Kenya/Uganda border at around 4 pm. The Kenya/Uganda border crossing is actually super easy. The Kenya exit immigration and the Uganda entry immigration is actually in the same room. So you stamp out at one counter, and shuffle over to stamp in at the adjacent counter. It was to my amusement that the Uganda immigration booth actually had an A4 sheet with “Countries that do not require visa” pasted in their little booth. When I handed over my passport, the guy just scanned that sheet, and gave me a stamp. It did avoid many an officer calling/flipping fat ringbinders to check Singapore’s status.

There were some other minor adventures along the road. It rained for part of the journey. It wasn’t particularly heavy rain, and it wasn’t sustained as well. This was about when I discovered that the window insulation of the bus is not the best. The light rain actually seeped through the bus window. Thankfully, by this point, a number of people had gotten off the bus at various stops, and I could scooch a little away from the window, and prevent myself from getting wet. If it’s the rainy season in Kenya, you’re well advised to pick a non-window seat if you don’t want to get drenched.

At about 8 pm, I guess the driver had gotten bored, and decided to start blasting his funky jam, which is fine, except it’s the same damn song on auto-repeat. It goes somewhere along the lines of:

[female voice in monotone – I suspect robot, or maybe it’s Siri’s side gig]

After about 2+ hrs (before we finally arrived in Kampala) of listening to DJ Perez tell bored female to say his name, I was done. I don’t know who the hell DJ Perez is. I sure as hell was glad when I finally rolled off the bus 16+ hrs later.

Oh, and I hate DJ Perez.