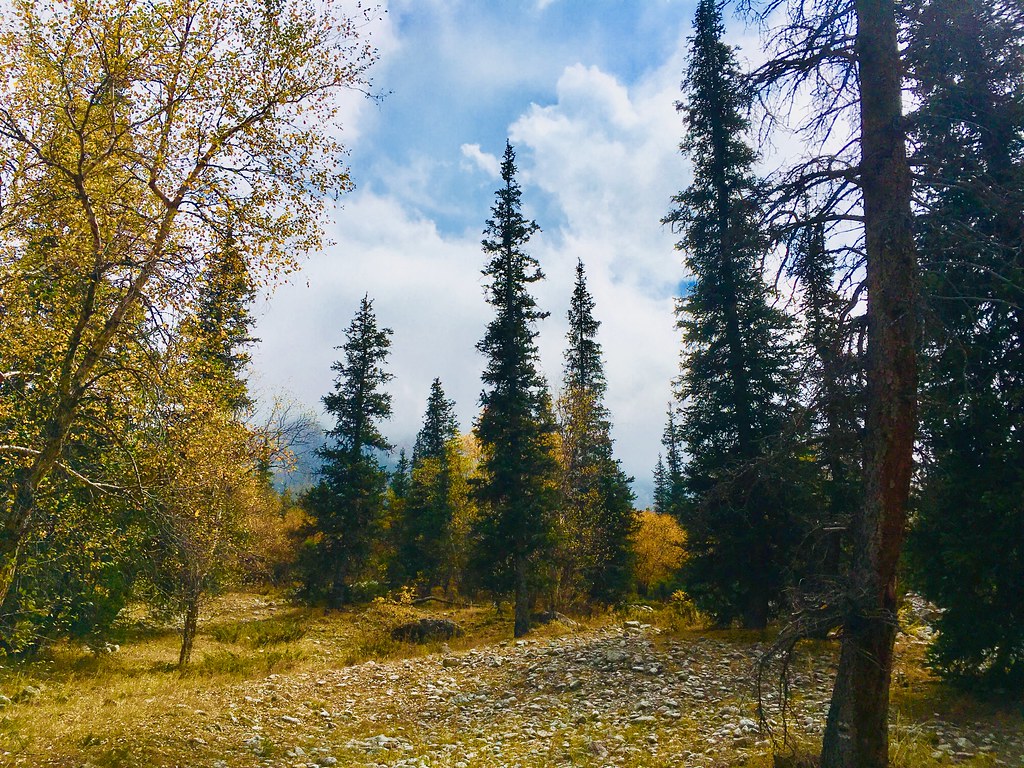 What led me to Ala Archa National Park? In Chinese culture, the Tienshan mountain range is this mystical place where highly-skilled swordsmen live in seclusion. It’s also the site for magical cure-all “snow lotus” that’s supposed to cure all ills. Ala Archa National Park is part of the Tienshan mountain range, and about 30 min car ride from Bishkek. I didn’t find swordsmen or the elixir of life, but I did find heaven on earth.

There are some places on earth of exquisite beauty that you don’t believe exist, until you visit them for real. My little slice of heaven on earth is Kyrgyzstan’s Ala Archa National Park. Thankfully, it didn’t break the bank. It costs 115 KGS, or less than 2 USD. Getting from Bishkek to Ala Archa National Park

The easiest way obviously involves hiring a car or a taxi, or simply booking a tour from Bishkek. The above still won’t break the bank. Roundtrip prices start from about 30 USD. But I’m not about easy. I am about cheap – I took marshrutka 265 to get from Bishkek to Ala Archa National Park.

Marshrukta 265: Getting from Osh Bazaar to Ala Archa National Park

Marshrutka 265 leaves from Osh Bazaar. I’m not entirely sure about timing, but I’d say marshrutkas seem to leave every 20-30 mins or so. I got there around 10.30 am, and the marshrutka left at 11 am. The marshrutka actually doesn’t go all the way to Ala Archa National Park, it stops at Kashka Suu, but because several other passengers were headed that way (school kids, an older lady), the driver decided to drive there all the way. He didn’t charge extra, but charged the standard 25 som.

Where to find Marshrutka 265 at Osh Bazaar?

It is by the bus station on Toktogul Street by Osh Bazaar. You should be able to find it near the junction of B. Beyshenalieva Street and Toktogul Street. I pinned it on the map below (the Post Office pin). That is where the bus starts. Ala Archa National Park or Kashka Suu is its last stop. At Ala Archa National Park

Hitchhiking: First Entrance to Second Entrance
The bus dropped me off at the first entrance of Ala Archa National Park, where the entrance fee of 80 som was collected. From the first entrance to the second entrance, it’s still a good 8 km, uphill. There were taxis waiting there for the ride, but I decided to test out how easy it was to hitchhike. Having said that, I was prepared to walk the whole way, and budgeted the time for it. Hitchhiking wasn’t very hard, actually. For the trip up to the second gate, I got picked up in under 20 mins by a trio going up to the national park for a photo shoot.

Second Entrance
When you arrive at the second entrance, you’ll see an Alpine hut. Hiking at Ala Archa National Park can take as long, or as short as you want. There are people who go on long hikes and bring their camping gear for overnight camps. I wanted to do this as a day trip, and was mindful of the fact that I potentially had to walk all the way back to the first entrance to catch the marshrutka back to Bishkek. I took the River Trail (turn right), and slowly strolled for only 1 hr round trip. Although the hike was very short, the views were truly rewarding. The Ala Archa River has the most mesmerizing color. Fall is also upon Bishkek, so some of the leaves have turned yellow and orange. Long story short, do it. You’ll be happy you visited Ala Archa National Park. Getting back from Ala Archa National Park to Bishkek

At about 2 pm, I returned to the second entrance, and started walking down towards the first entrance. It took less than 20 mins before three young men stopped their car, and picked me up. They were on a trip to get some fish from Kashka Suu for their family. They dropped me off at Oto Say, where I grabbed a mashrutka for 10 som back to Bishkek Park. Some thoughts on Daytrip to Ala Archa National Park

If I were to do it again, I would probably hire a car so I have more time to hike at Ala Archa National Park. Unfortunately, the cost of a solo traveler hiring a car is prohibitive. If you have travel companions, I would suggest hiring a car, or at least the taxi from gate 1 to gate 2. I think locals are amazing in their generosity. It was actually the first time I ever hitchhiked, and it was very humbling to have to live off the generosity of others. Having said that, I wouldn’t advice people to continually tax locals by hitchhiking. It was a great experience, and I was very thankful to them for their generosity, but don’t abuse it.

Also, do bring a rain jacket. The weather changes rapidly in the mountains – it went from sunny to drizzle in a matter of minutes.