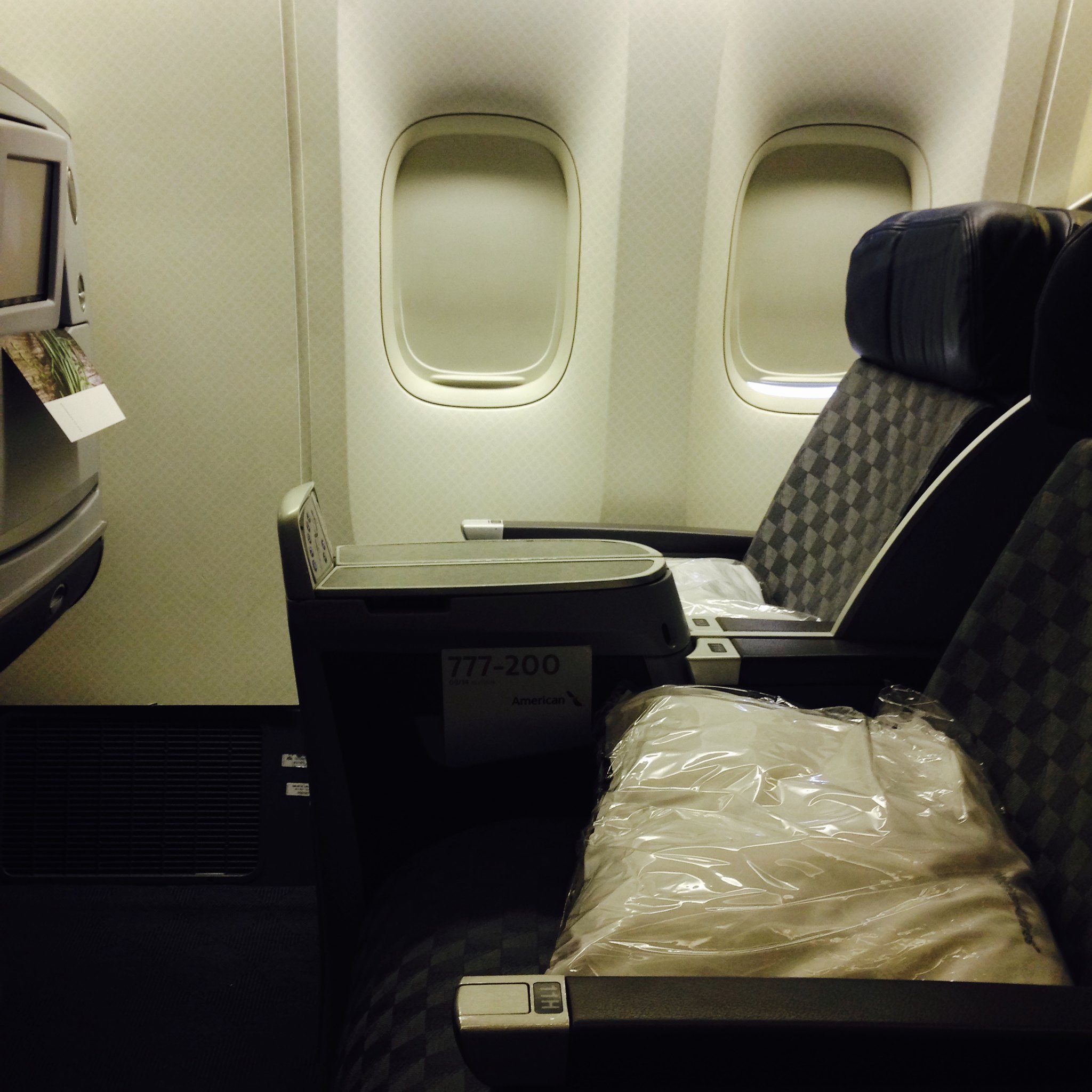 AA37 is a Boeing 777 offering three class service: first, business, and coach. Their business class product offers an angled flat seat, in 2-3-2 configuration. While I booked it by mistake, and was kicking myself for booking an angled flat seat, I had a rather decent flight. My mistake was mitigated by it being a daytime flight.Furthermore, I had an excellent flight attendant, whose mission seemed to be to indulge me.

For this flight, I did something rather rare for me – I initially chose a window seat, but figured that climbing over a stranger could get awkward real quick. So, I opted for an aisle seat. It was a good choice, because I wound up getting up quite a bit, and just walking around because it was 11+ hours. 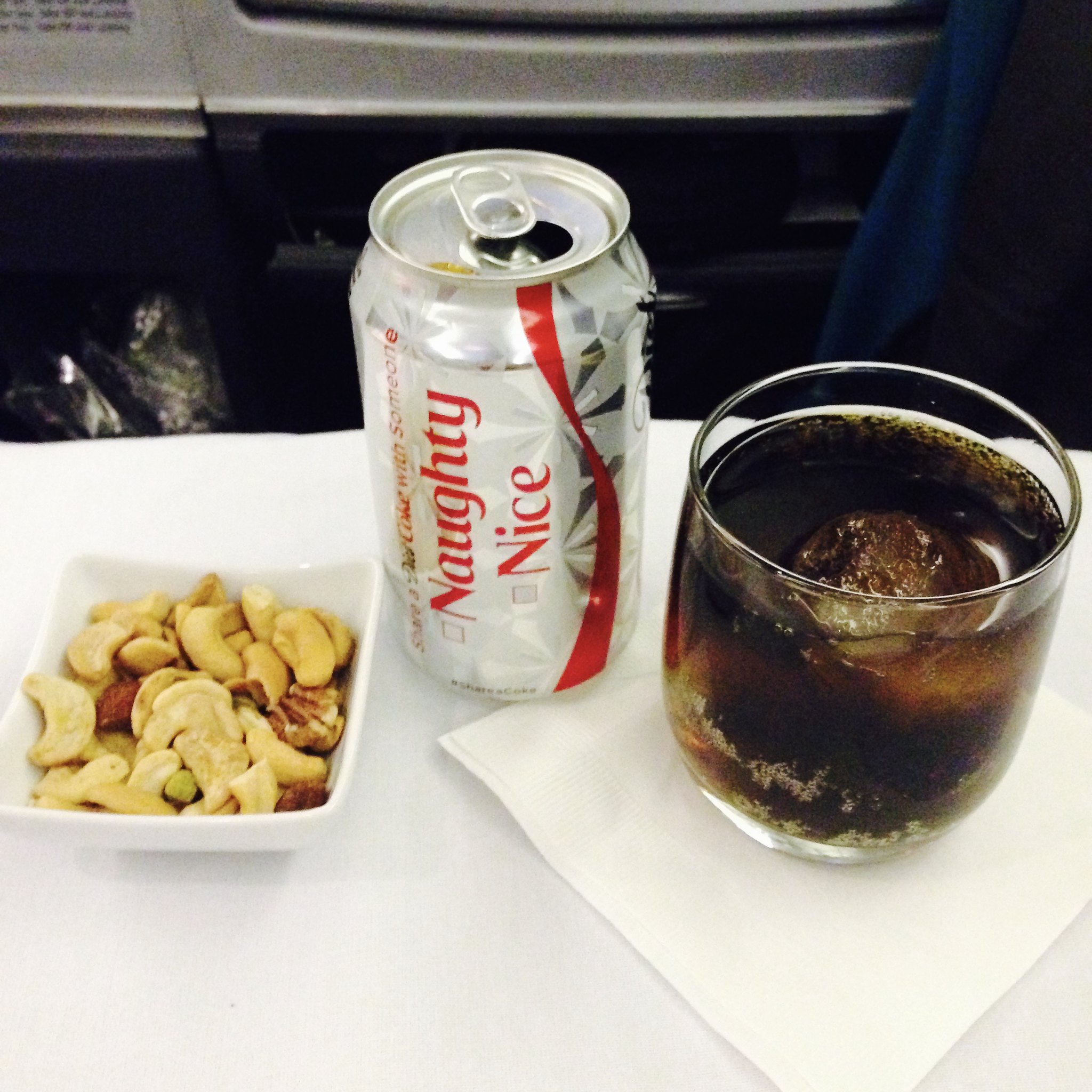 There was an orderly priority boarding. The business and first cabins were packed, but flight attendants serving business were efficient. Pre-departure beverages were offered, and the choices were: water, orange juice, mimosa, and champagne. I went with the mimosa. While inflight entertainment generally doesn’t matter to me, it’s also nice that it’s available on the ground.

After we hit cruising altitude, the FAs started taking lunch orders from passengers. I pre-ordered my lunch of beef steak with potato croquettes. I believe the other options are chicken, and a vegetarian pasta. The Bose noise-cancelling headphones were also distributed around this time (they are pretty awesome – I used them the whole flight). 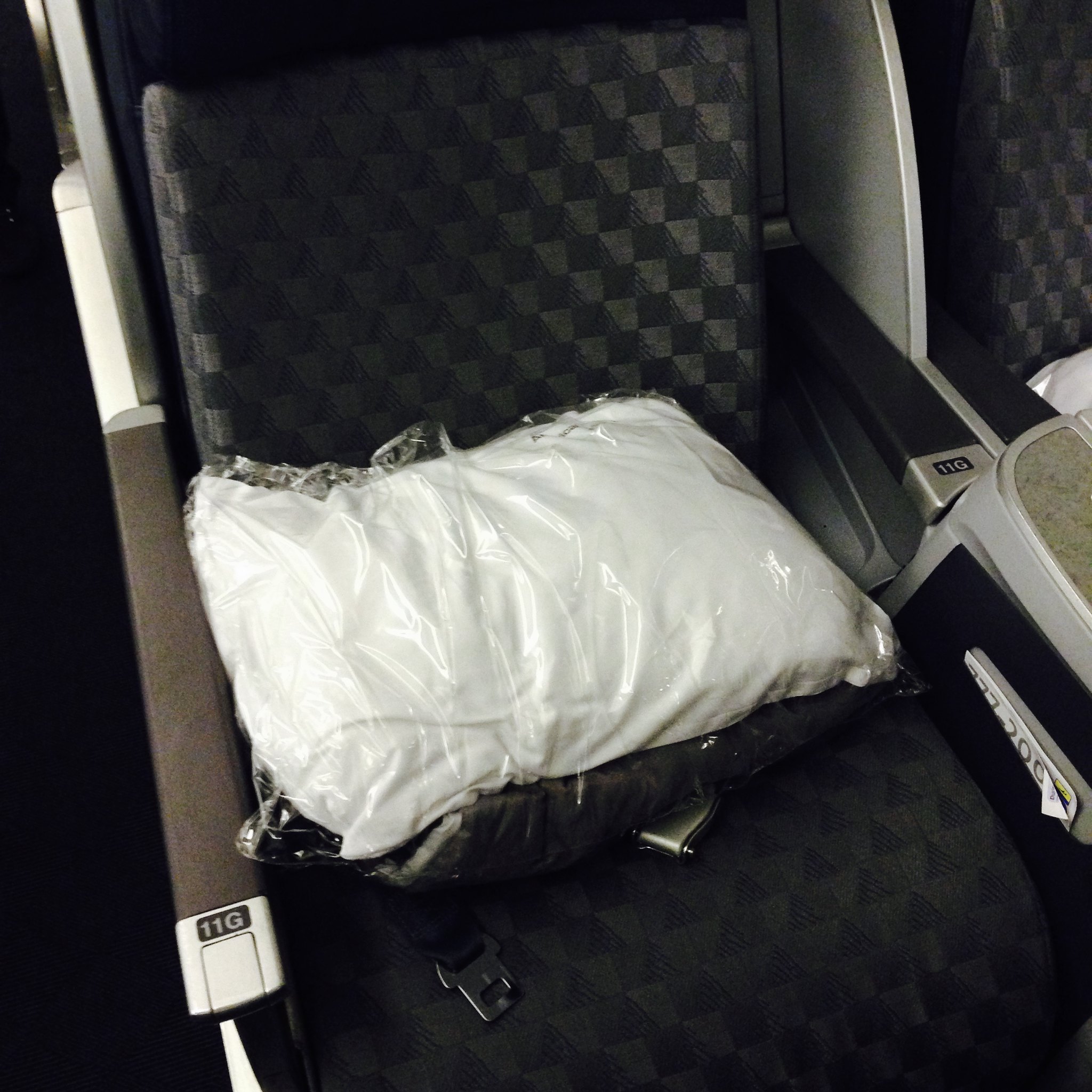 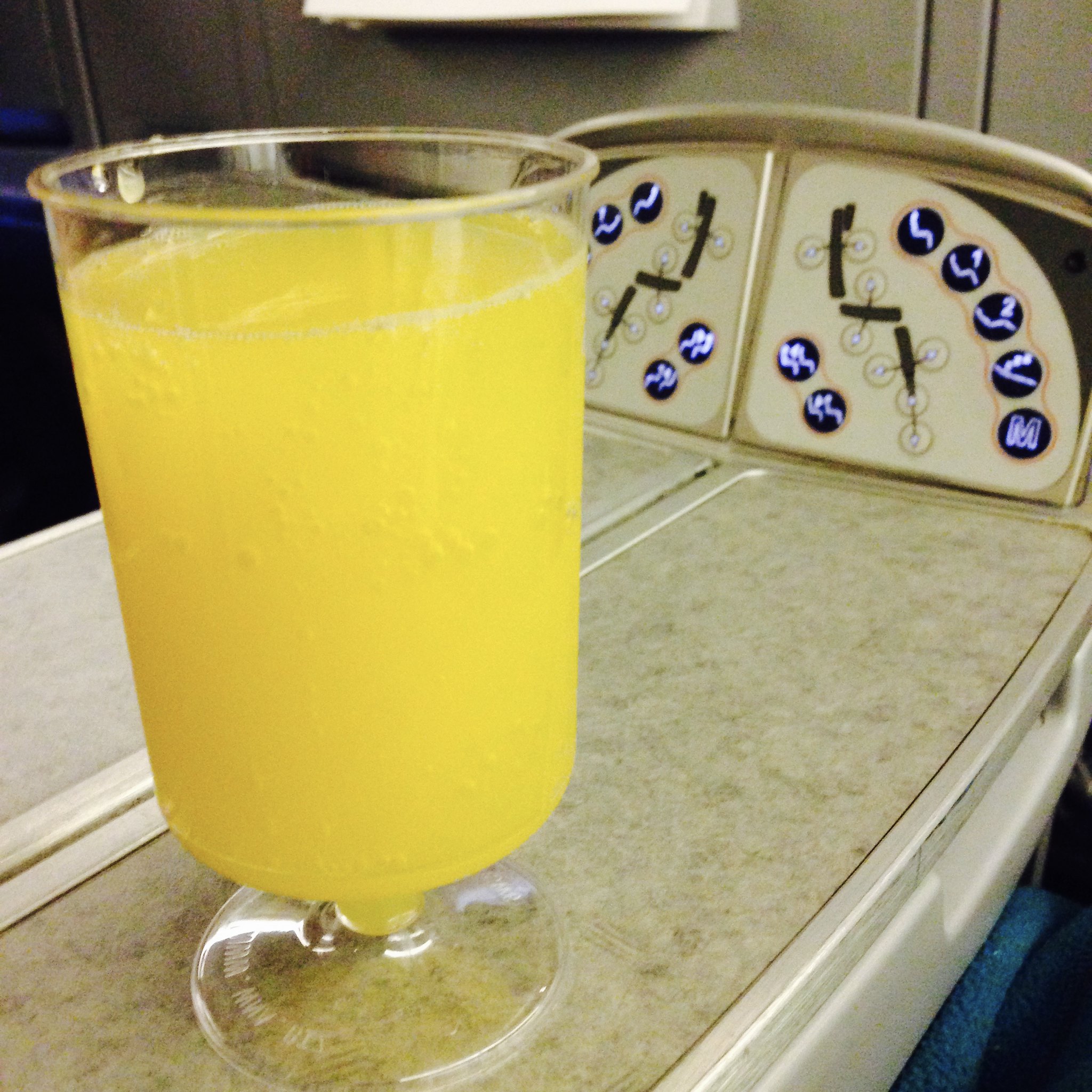 It started with a salad, and a prosciutto and fruit plate, and bread was also offered. It wasn’t too bad, actually. My beef filet was ok as well. It was edible. The potato croquettes were kinda disgusting, though. I’m a potato person, so if I leave potatoes uneaten, it does say something. It was dried out and grainy. The ice cream sundae did make up for it. 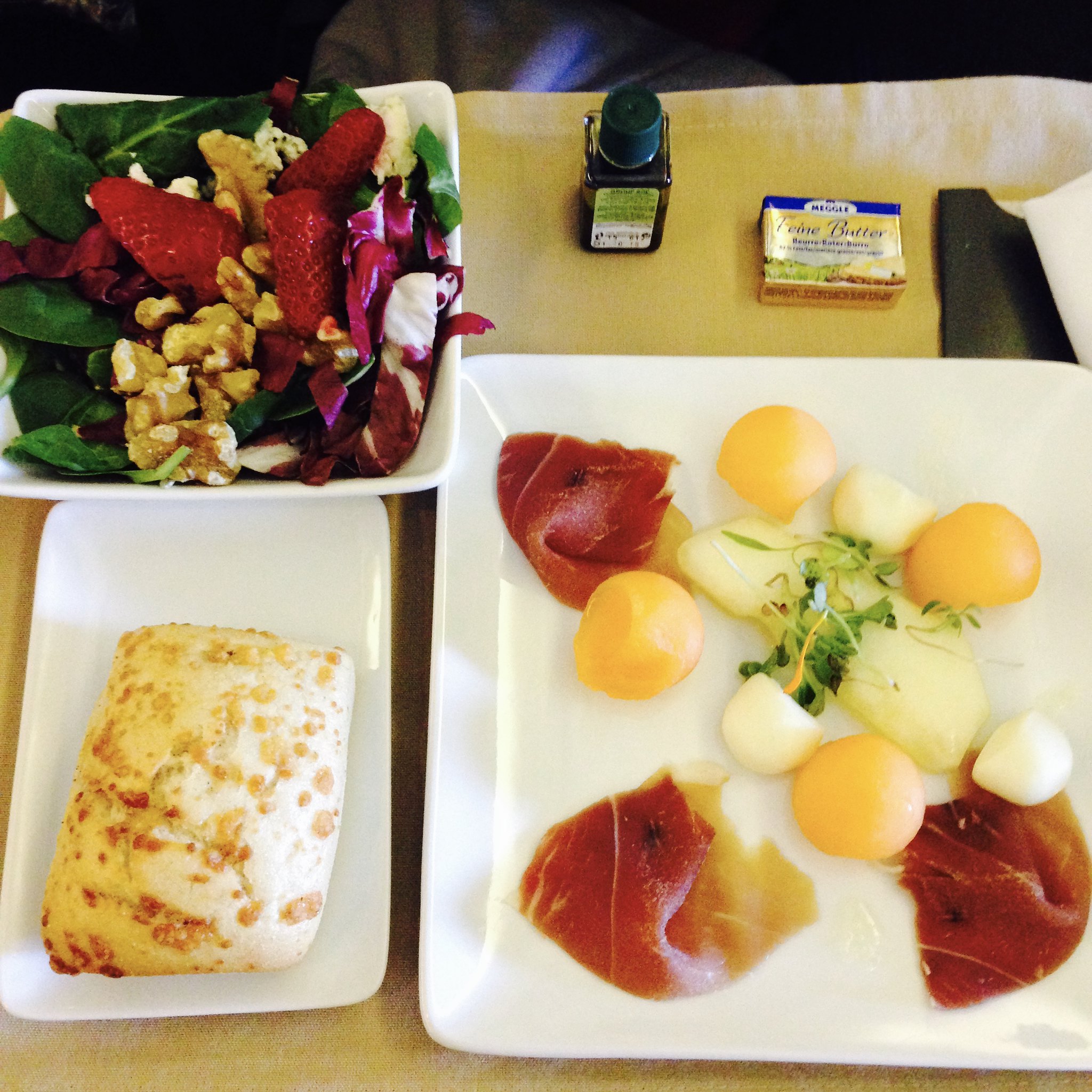 They also have a snack cart by the galley, and you’re invited to help yourself throughout the flight. They mostly have pre-packaged snacks and fruits, but they also had a chocolate truffle with strawberry, which was pretty nice. On the beverage front, they only have water for self-serve. I wouldn’t have minded some other options. 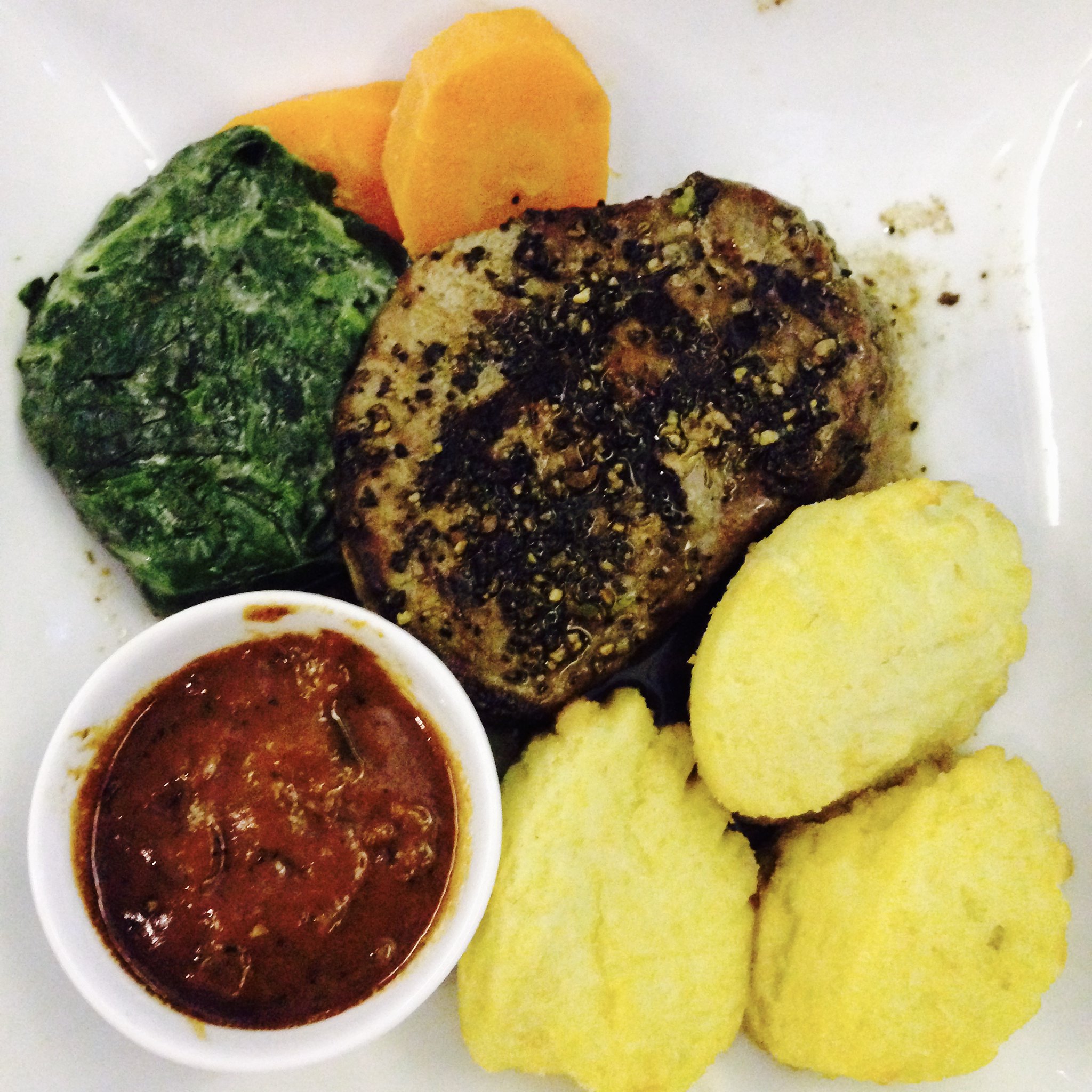 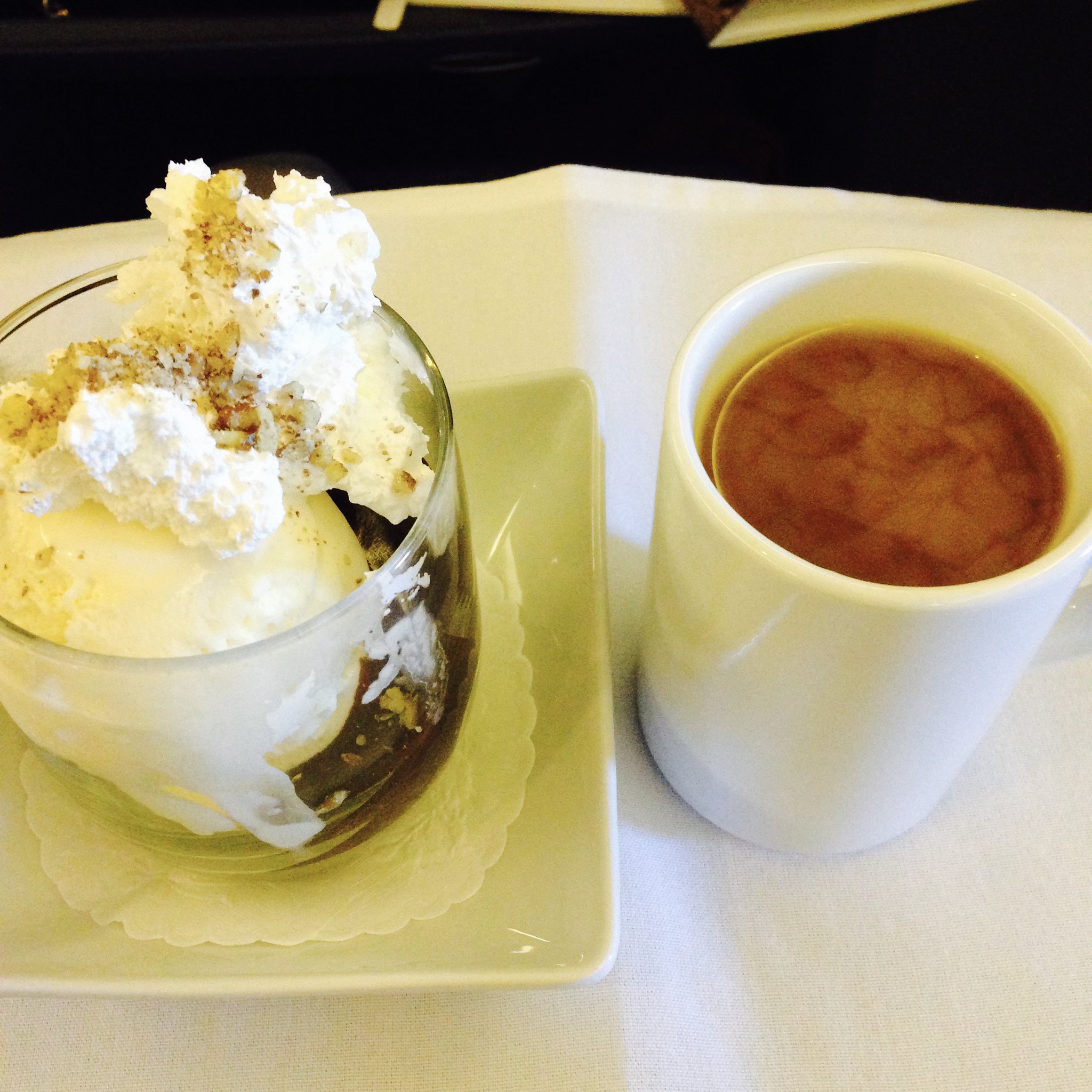 About two hours before landing, they also served another snack. They had two different salads on offer. I opted for the Thai salad, which had some noodles and greens. People on the other aisle actually got beef with their Thai salad, but my beef went missing. I didn’t mind it, because I was expecting to have dinner on my connecting flight, and I didn’t want to get too stuffed. Oh, if only I knew how the next flight was going to turn out. 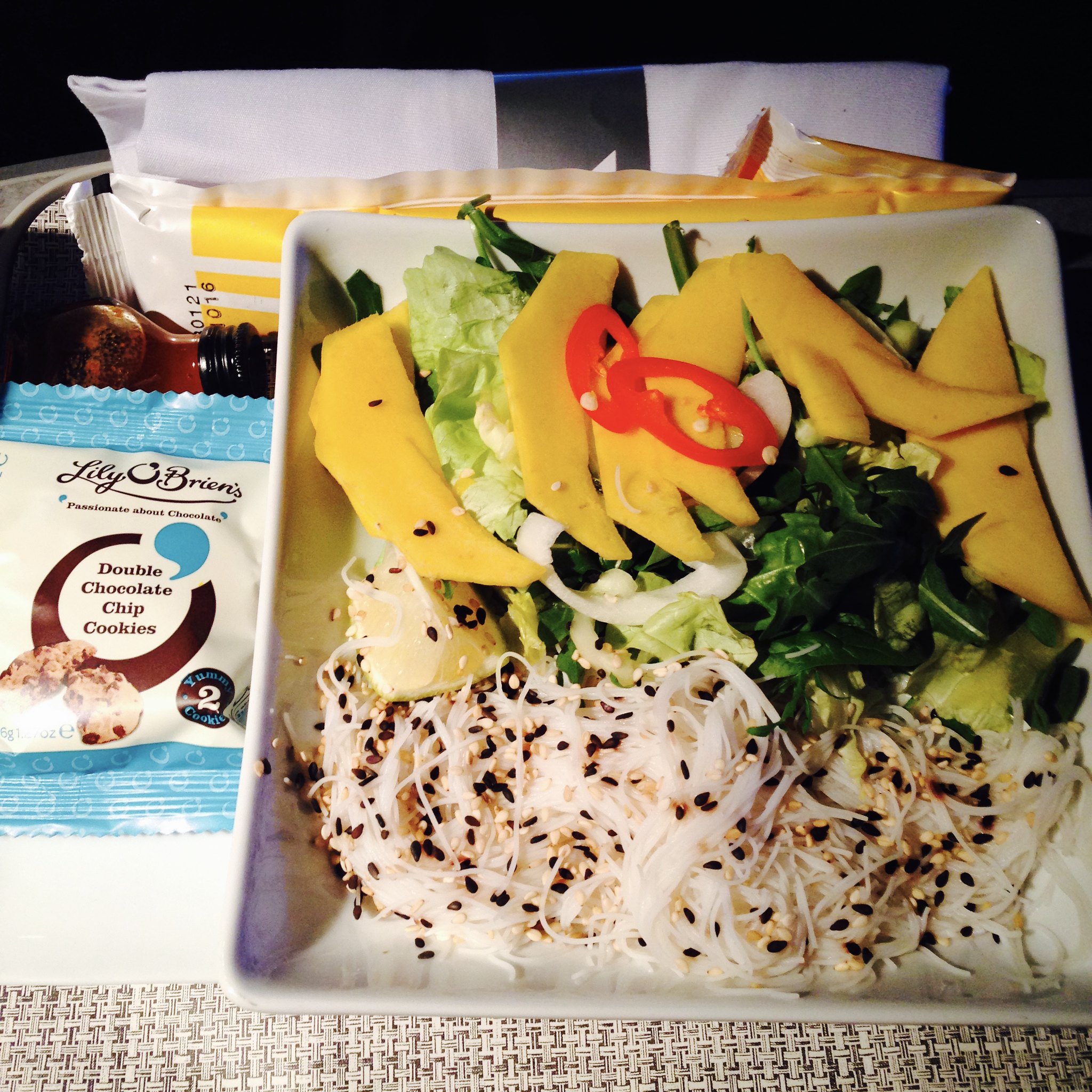 There are quite a number of settings. It can get quite odd the way it reclines. At points, you might feel like you’re on a barber’s chair. Or at other points, when it’s slowly getting to the angled flat setting, you could feel like you are being lowered into your grave. I did appreciate the full range of settings. It wasn’t too bad for taking a nap. I did nap comfortably for some two hours of the flight, although to be fair, I pretty much can sleep under any circumstance. The relax settings were pretty nice, and you can also customize it to your own preference with manual controls.

Relative to the British Airways 747 Business Class product, there is more storage space. There’s some room under the armrest for some items, and they also have a magazine storage spot, where you can put stow some reading material. I also put my messenger bag at the foot cubby area. Under the armrest, there was also enough room to put a book. I simply left my laptop by my side for the flight.

The table can turn into a mega-table, if you need a lot of room. Half the table is in the armrest, and that should be enough to eat, but there’s also another half table that’s under the IFE screen. You can join the two to form a mega-table.

In terms of power, it was a little bit odd. They have those power jacks that are like the ones available in cars. So if you want to charge something, you have to request for an adapter from the flight attendant (unless you’re like a boy scout, and are always prepared with a car charger).

Having said that, I do prefer the British Airways 747 Business Class product. It offers a lot more privacy and room (you get 4 windows to yourself), and the bed is more comfortable, obviously. 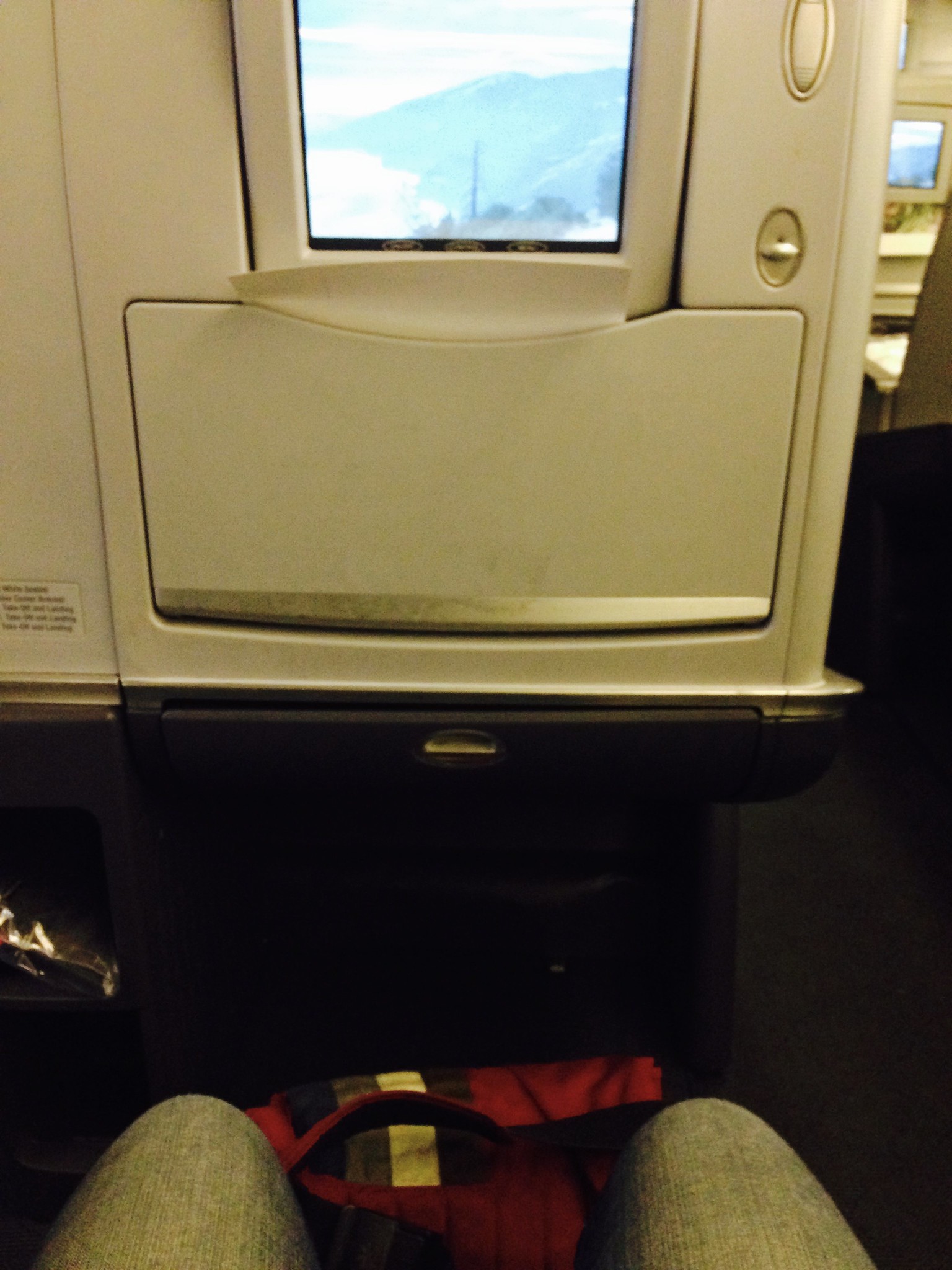 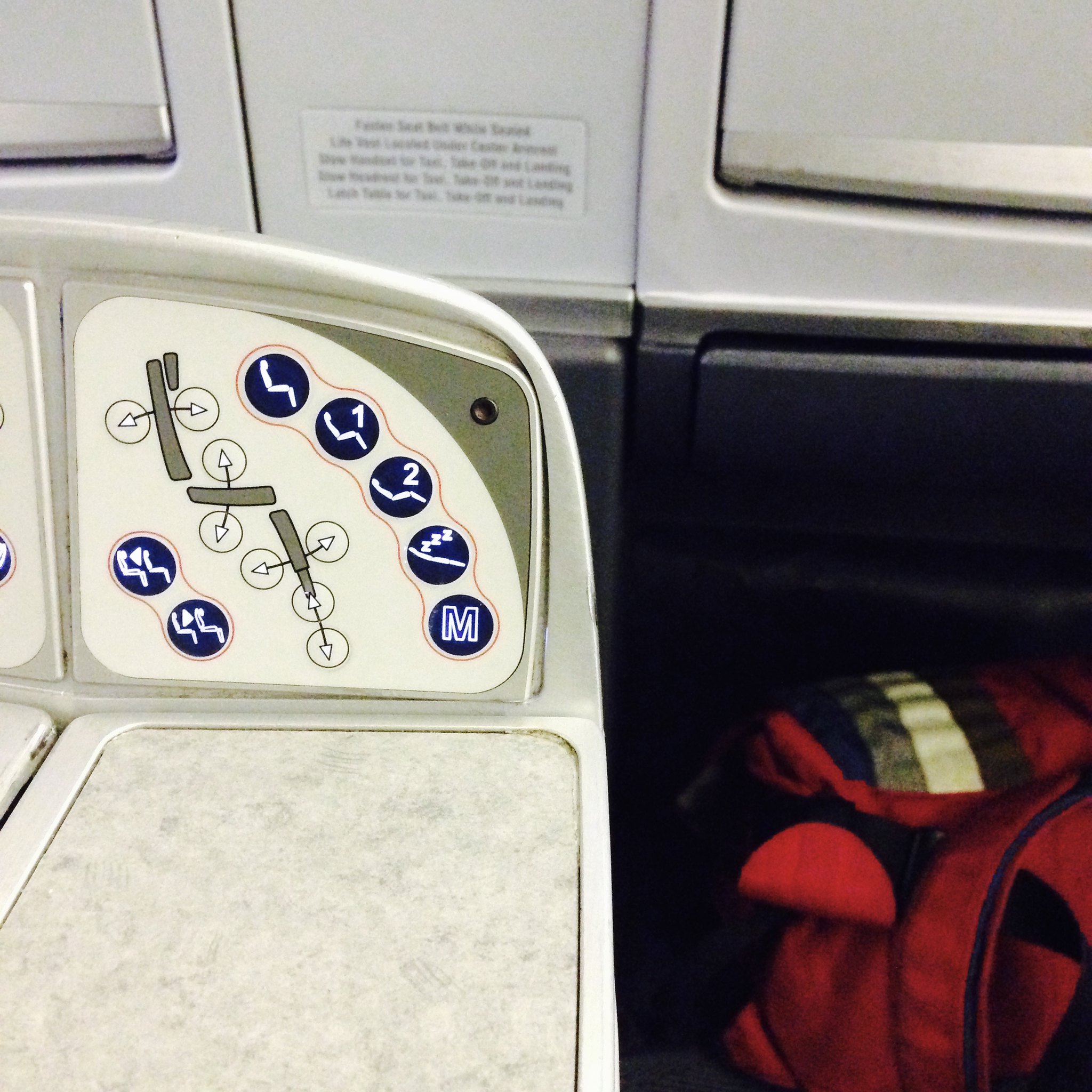 It seems half decent. They do have fairly recent movies. Their TV shows also made more sense. They had about 6 episodes of Big Bang Theory, which was in sequence, and it seemed to be the case for other shows as well. The touch-screen itself was rather unresponsive, though. I was not the only one who had an issue, as it appeared that the guy beside me was also madly stabbing at his screen. The remote by the side of the seat, while responsive, required some brute force jabbing.

After reading online about all the service failures on American, I was actually bracing myself for the worst. But on this flight, I lucked out. I had a very enthusiastic and friendly flight attendant, who walked through the aisle a number of times between services. She also happily kept my coffee mug filled throughout the flight. So none of the gruff “why are you bothering me?” attitude that I was really expecting.

I was really expecting the worst for this flight, just based on reviews and general consensus. The angled flat seat wasn’t great, but it also wasn’t horrific. I had an enthusiastic flight attendant, and my food was edible.

The most memorable part of the flight, wasn’t actually anything to do with the business class itself, but the father and daughter seated beside me. The flight was very full, so they got upgraded, but the mom/wife got stuck in coach. She came up several times, gave me rather dirty looks and instructed her husband and daughter to go steal snacks from the cart in the galley. The whole experience was rather amusing, and there’s nothing more peaceful than having an irate mom/wife talk over my head while I’m trying to read. Nothing like a wife/mother stuck in economy! 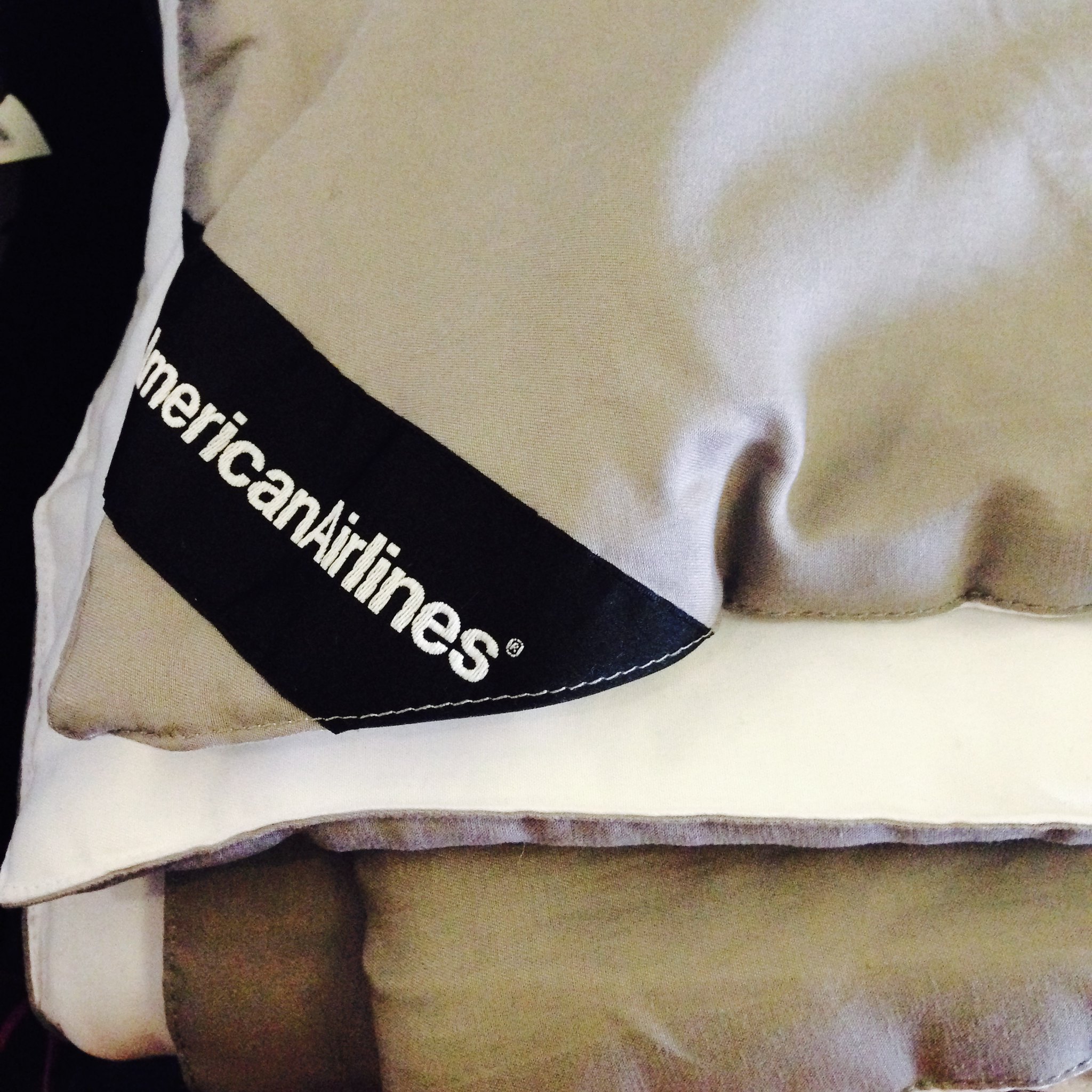