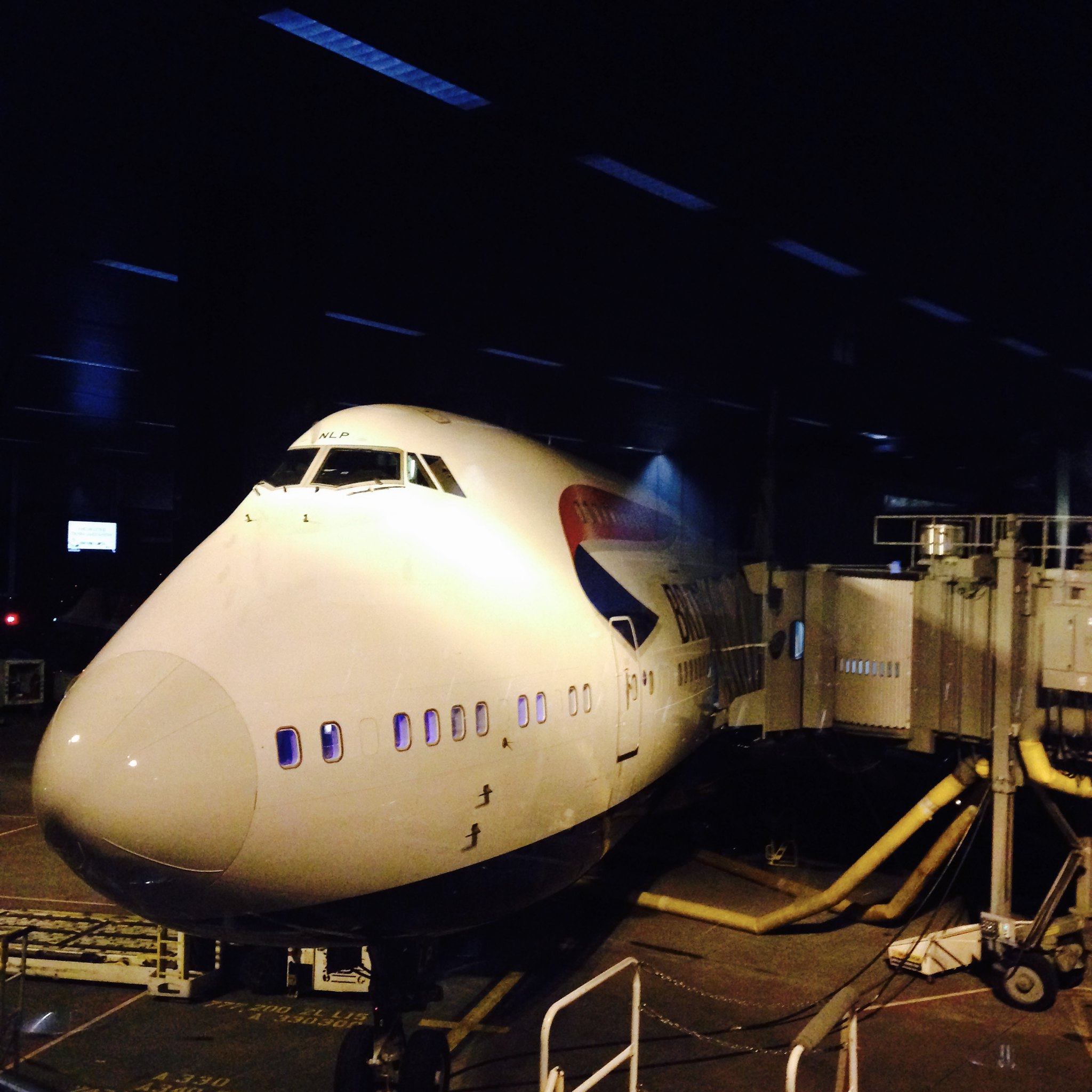 One of the more annoying things about British Airways is, if you want to select a seat (even a premium seat) without status, they make you pay extra for pre-selection of seats. Initially, I really wanted to sit on the upper deck of the 747, after sitting on the upper deck of EVA. But after looking at how the cabin at the lower level was filled (or unfilled), I stuck with my assigned seat – 17A, which is the first window seat. I ended up liking my seat! 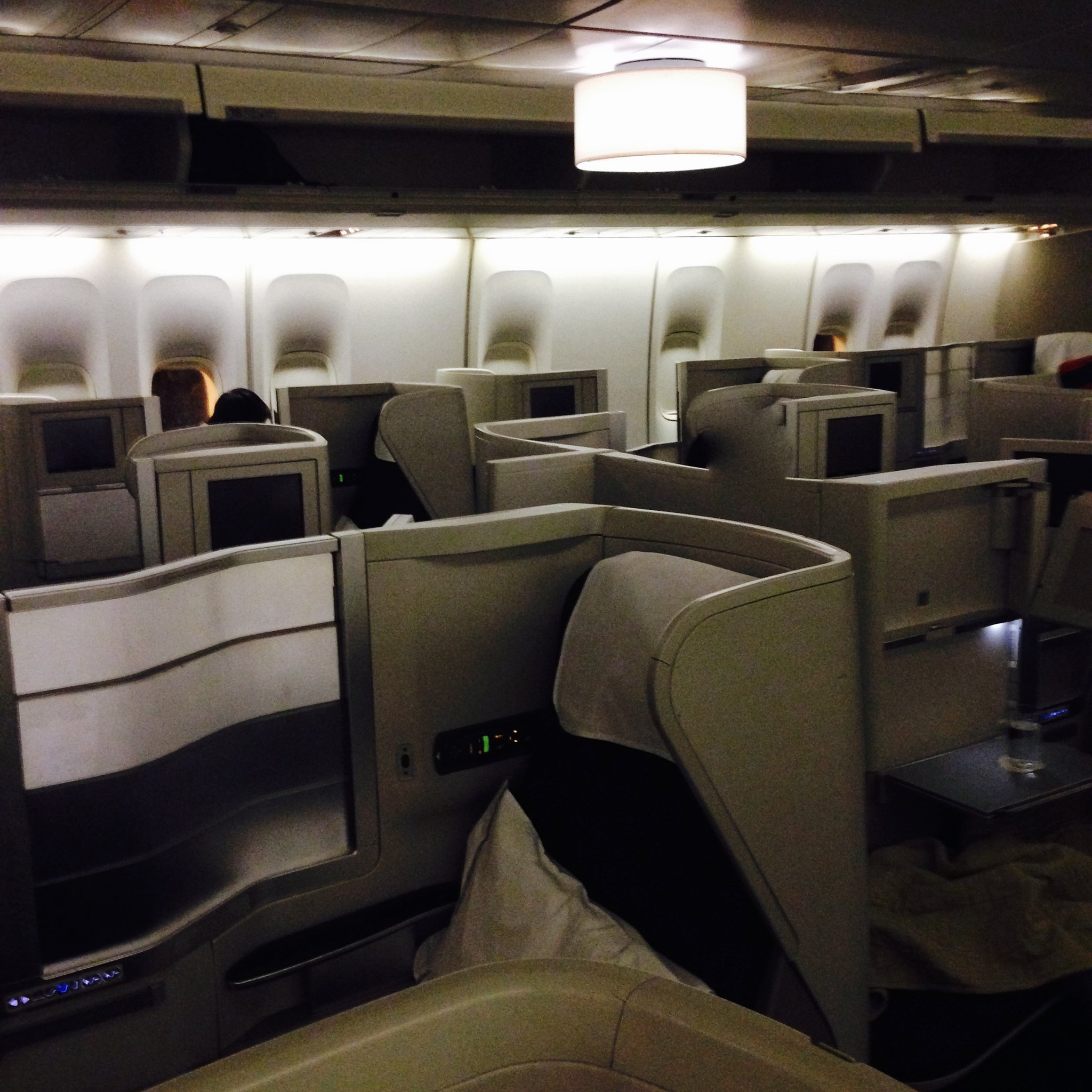 First off, all the windows seats on the 747 are incredibly private. Once I raised the privacy screen, I felt like I was in my own little cocoon. There are also a couple of advantages of being in the first row seat – when I stood up, I could see what was going on with the other rows of window seats. By contrast, I think only people occasionally walking down the aisle can see what I am doing? I also thought that flying facing backwards would be weird, but after takeoff, you won’t notice the difference. And as a plus point, sitting facing backwards means that when people in economy class walk in, you won’t have to see their jealous/judge-y faces.

Initially, I thought that the seats in the middle would be quite a bitch, but they are actually pretty nice if you are traveling in a pair. While I didn’t sit in those seats, they felt like a private suite for couples! 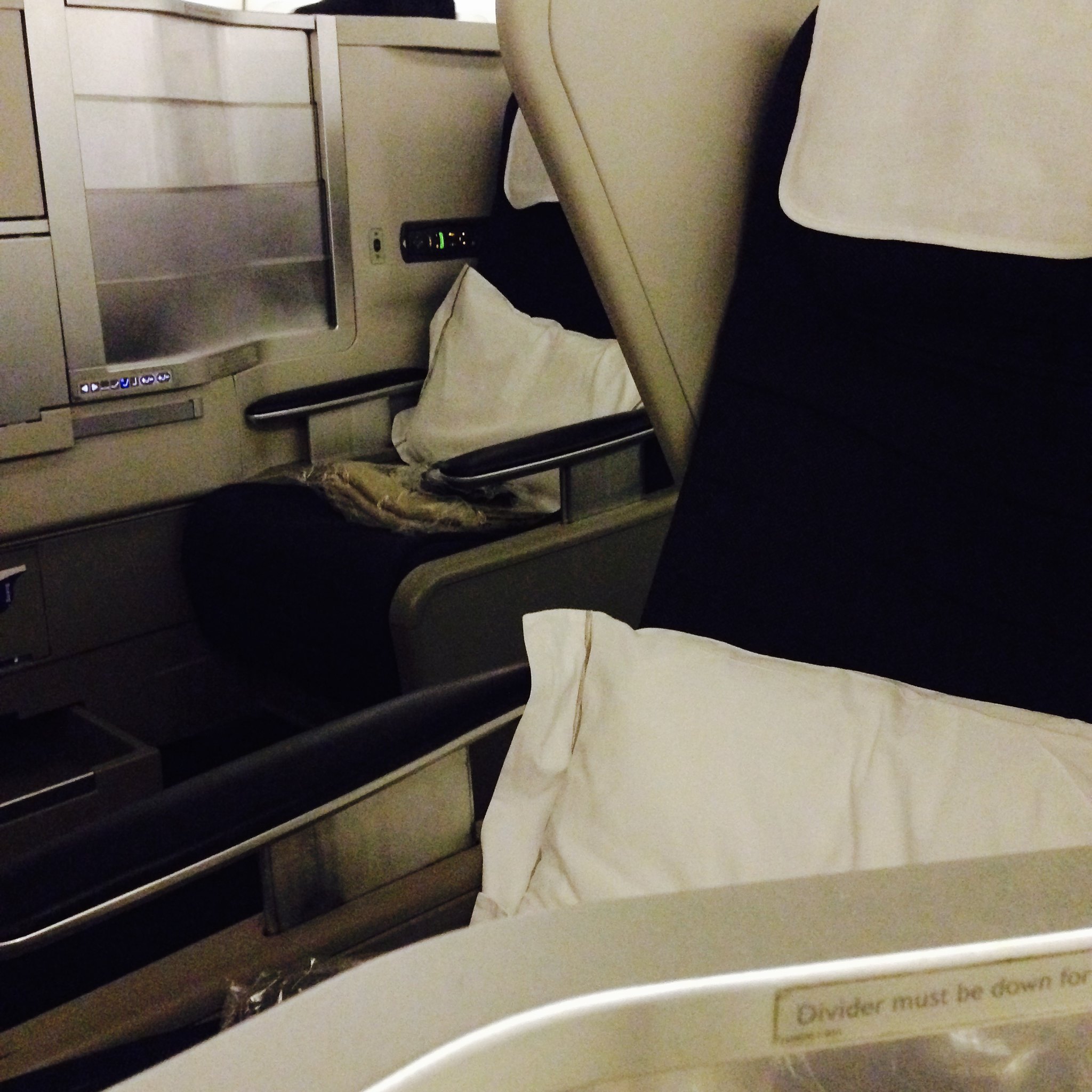 This leaves us with the aisle seats: these are highly exposed. I don’t see myself ever wanting to select these seats. It might be slightly annoying for people who are in the middle/window seats to get out of their seats, but if you are a tall-ish person, that should not be too much of a problem. Also, if you are in the aisle/middle seats, you won’t have to deal with someone trying to climb over your legs when you are sleeping/lounging.

I am not sure if this is an advantage or disadvantage, but the aisle seats are brighter. It is helpful if you are trying to see what you are eating, but probably not so awesome if you are trying to sleep, or just trying to get some peace. My private light was kinda less than useless for reading or working, but I do work on a laptop for the most part. 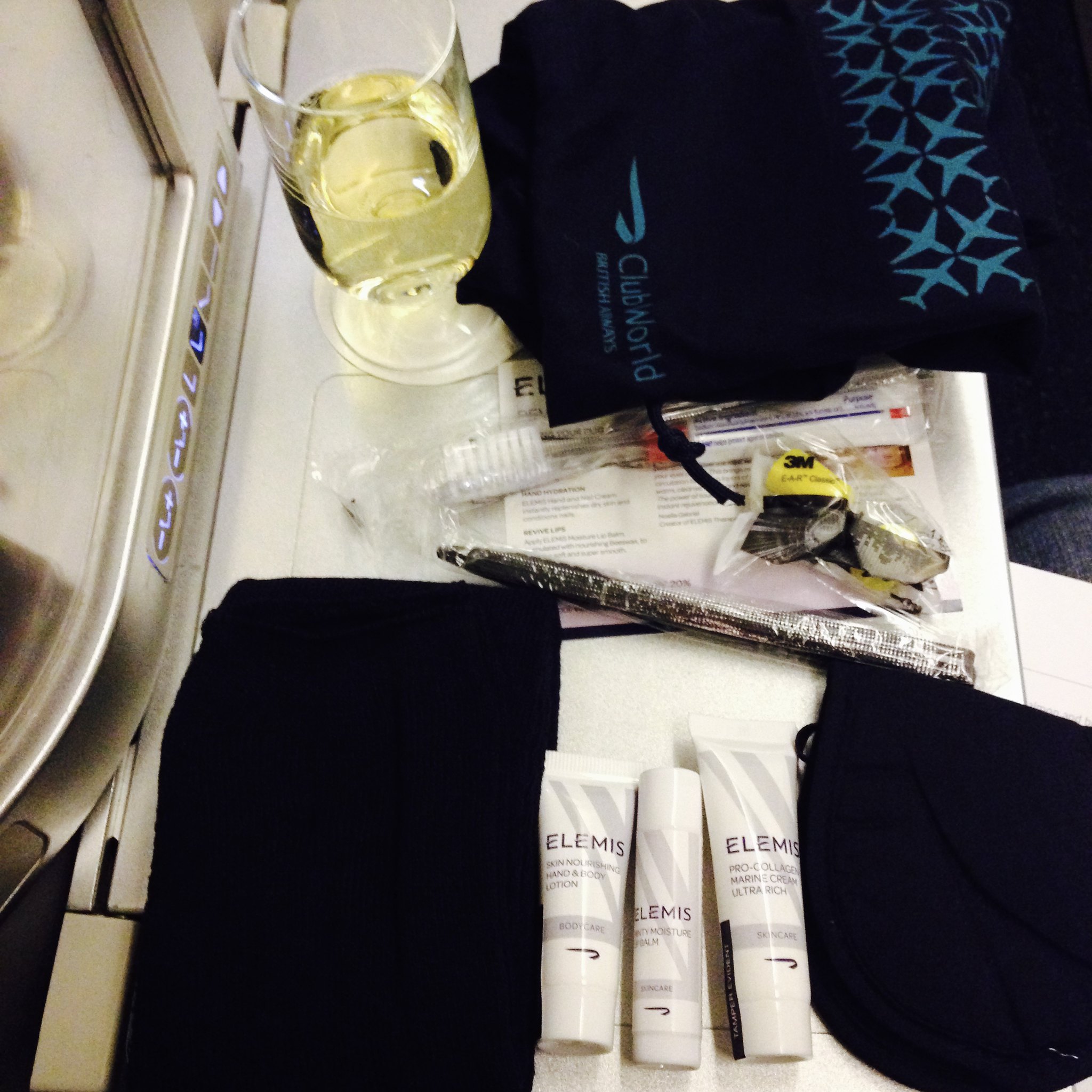 After settling in, we were offered a choice of champagne, orange juice, and water. On the seats, was a nice duvet, and a nice-sized pillow. The pillow smelled really nice, lol. After drinks were distributed, the attendant came around and distributed amenity kits, which have socks, toothbrush, toothpaste, pen, eyeshades, earplugs, and lotions and lip balm from Elemis. I was looking forward to the bag, as I needed a shoe bag for my heels. 😀 Shortly after, hot towels were also distributed for passengers to freshen up.

The controls are automated, and if you need some instructions, there is a little booklet on all the features of your seat. I was a doofus, and didn’t realize that there was a button for the privacy screen. I only found the button after looking through the booklet.

They are a solid international business class product. I am an average sized person, so I don’t need that much room. Actually, when my seat is in take-off/landing mode, my feet barely reach the footrest. But the advantage of this is, when my seat is in the bed mode, I can actually sleep on my back, and not curl up in a fetal position.

My main gripe about the seat is the lack of storage. They only have what they call a laptop locker, which is on the ground, i.e. not exactly convenient to reach, and that’s that. I did spend some of my time juggling all my stuff, and trying not the break my beverage glass, because the only ‘storage’ is either my chair or my tray table, it was quite an adventure for most part. My chair became my water bottle spot, and it was kinda awkward to sleep with a cold water bottle rolling onto my face from time to time. I also had to put my glasses in my bag, because I didn’t want to smash them. 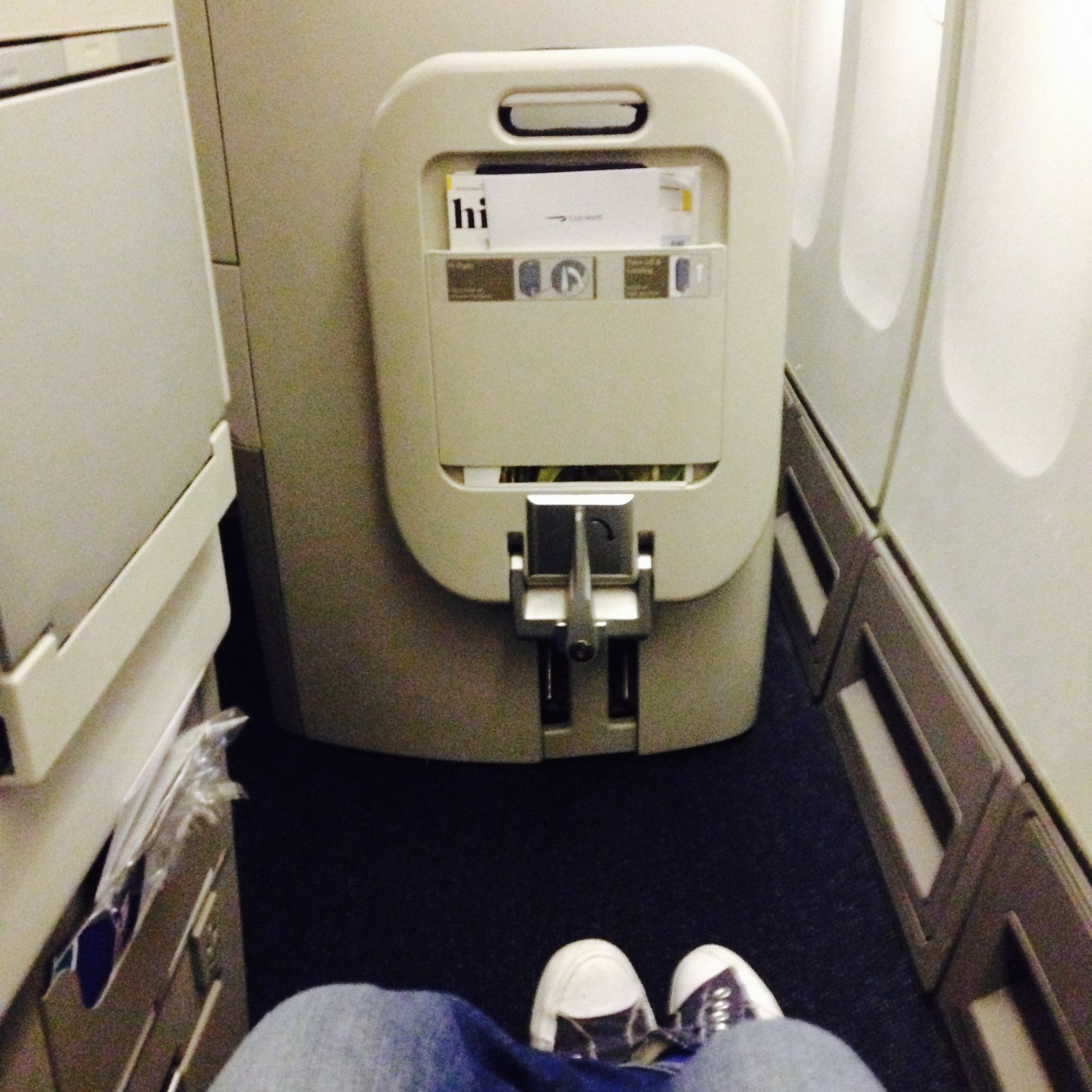 Dinner service started 50 mins after the plane’s official departure time, so probably about 20-30 min after takeoff. I opted for the salmon and cream cheese gateau as my starter, the beef for my main course, and the cherry and almond slice to finish. There is another advantage to sitting right up front – I got served first, and so my dinner service went really quick (under 1 hr). By the time the last person in the cabin got their starter, I was onto my entrée. 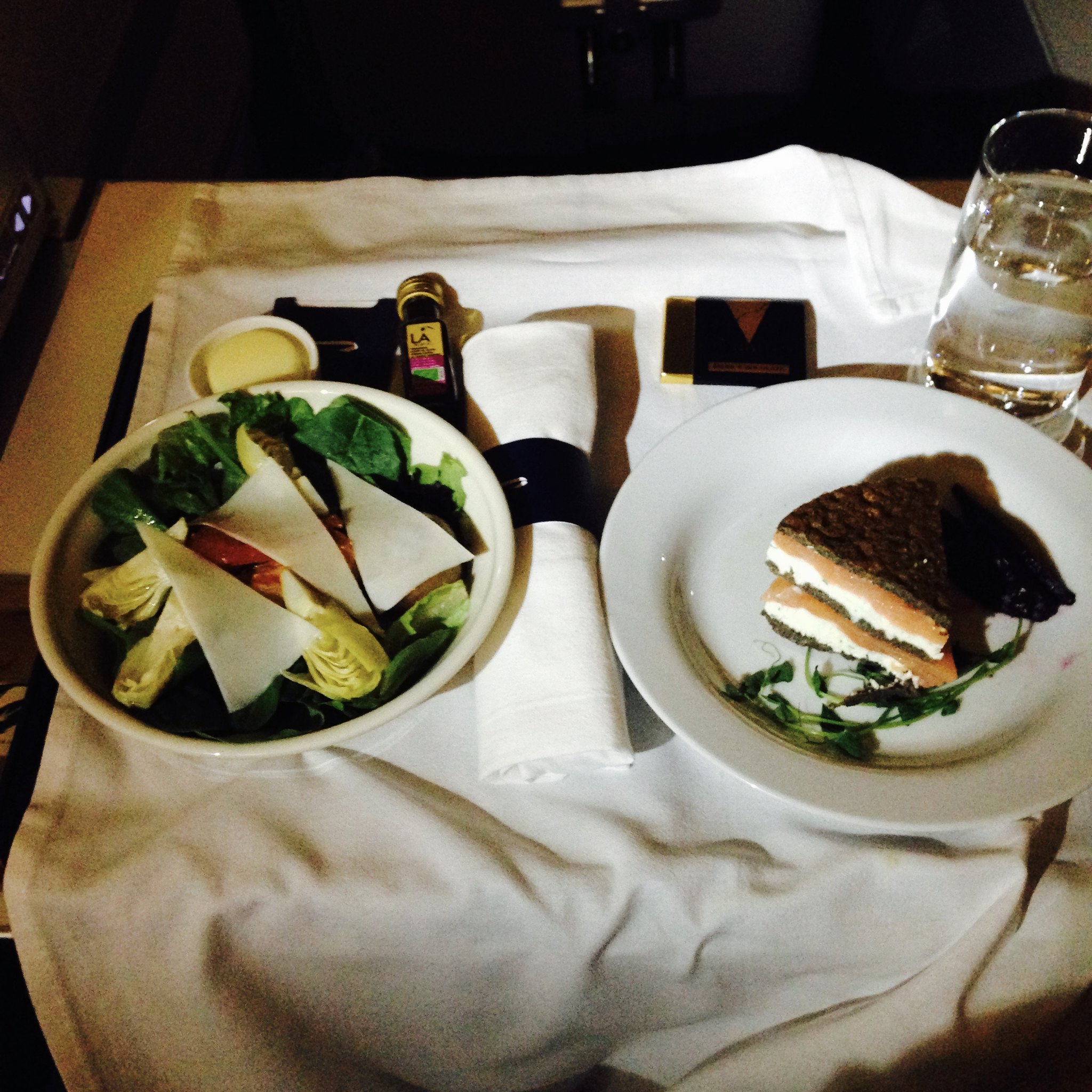 I thought the starter was a little weird, but as advertised. I just never had a savory gateau. I did really like their seasonal salad. Despite all fears of ending up with a hockey puck for beef, I’d say that while well-done, it was perfectly edible. It was slightly tasteless, so I simply put the little dollop of butter that they provided on top of the fillet, and made myself a decent little dinner. The dessert was pretty awesome – I generally don’t like cherry, but the cake was very moist and a very refreshing combination of sweet and tart. I finished my meal with a cup of tea with milk. 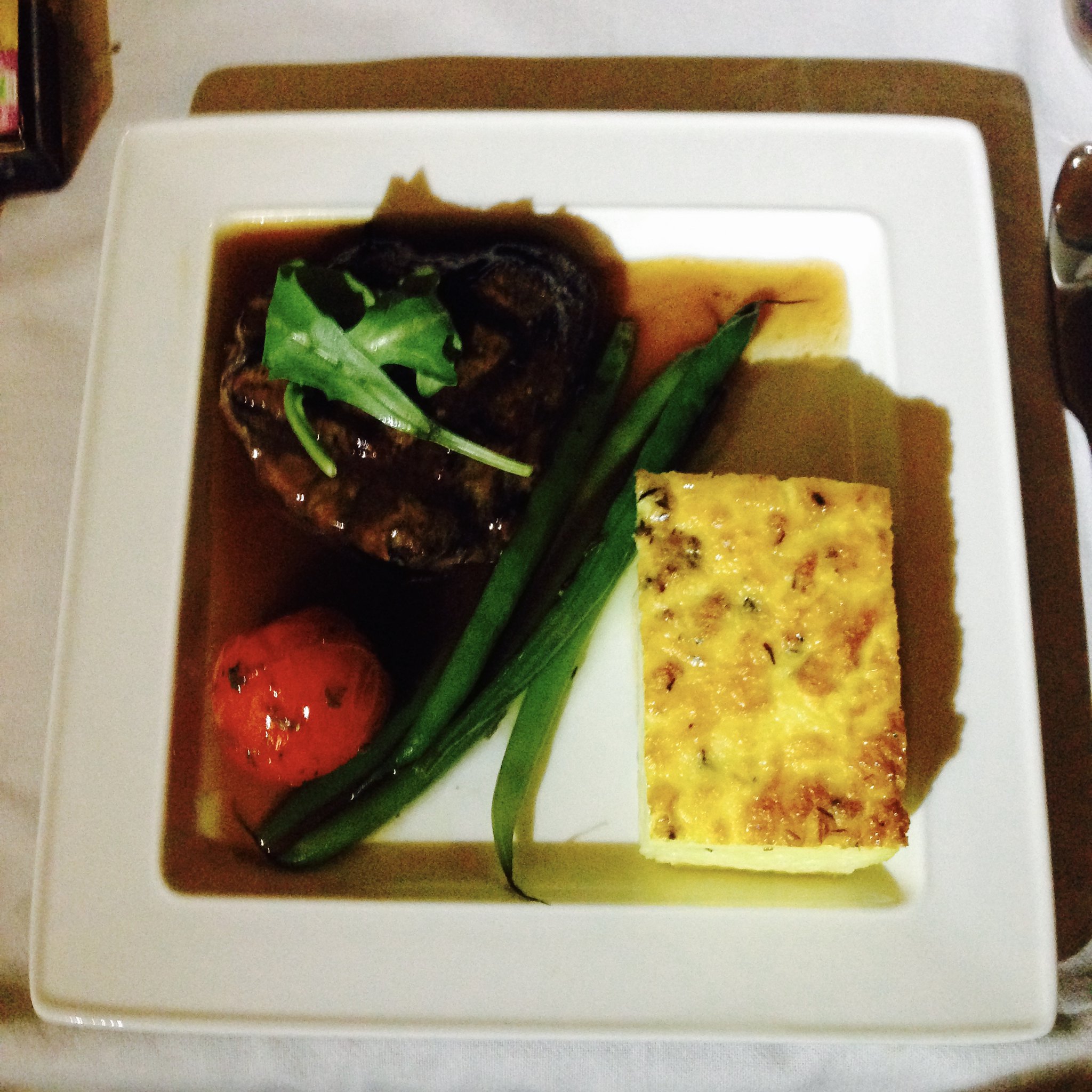 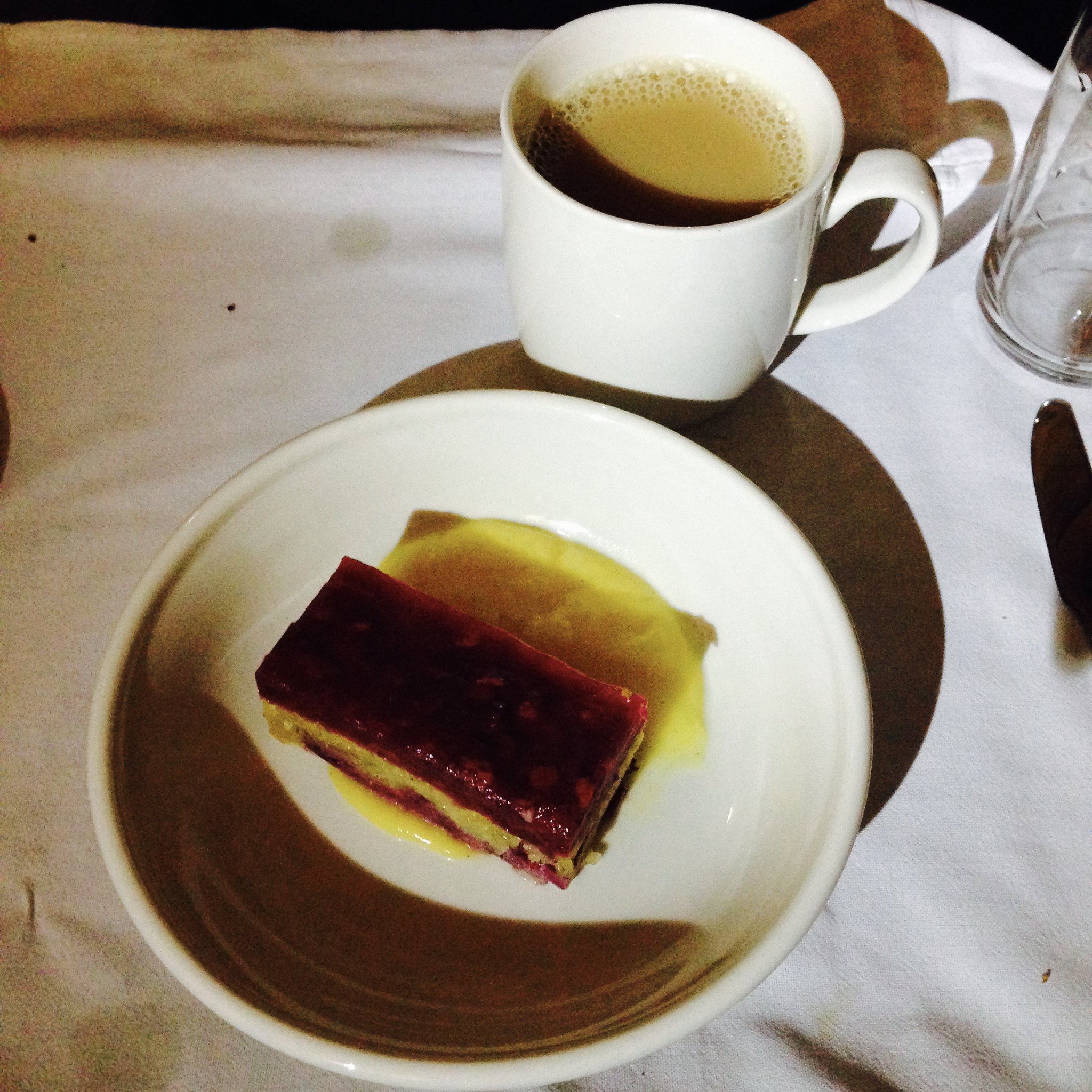 If you are hungry during the flight, they have what they call “club kitchen”. It is by the galley, and it is a self-serve. They have some cold snacks like sandwiches and cakes, and other pre-packaged snacks like Mars bars, and kettle chips. 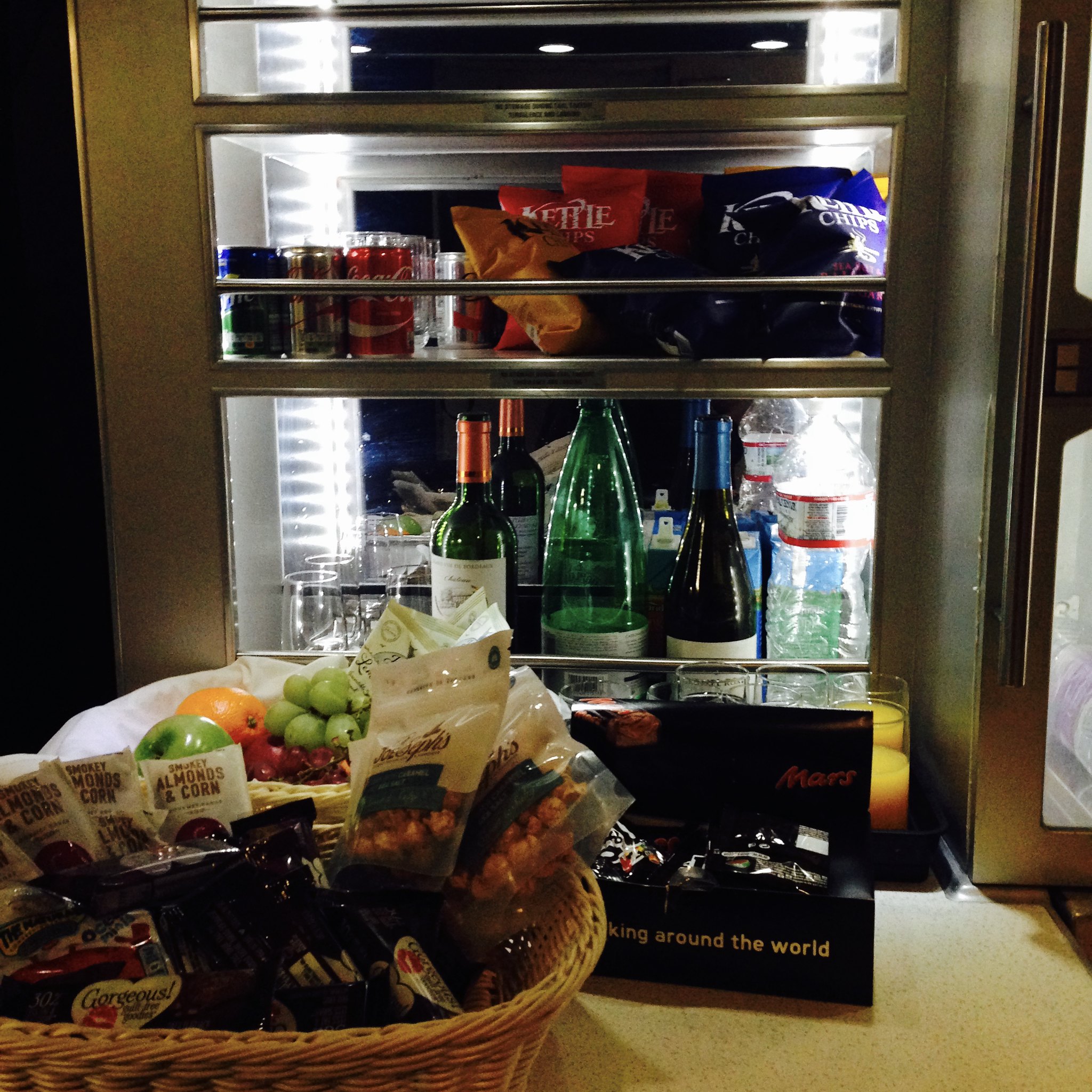 About 75 mins before our arrival at Heathrow, the lights started to turn on in the cabin, and breakfast service started. It was a continental breakfast, and the choice was between cereal and fruit. I went with fruit, and also had a smoothie, and some breads from the bread basket. I passed on the bacon roll. Breakfast was rather nice, and I can never say no to warm croissants! 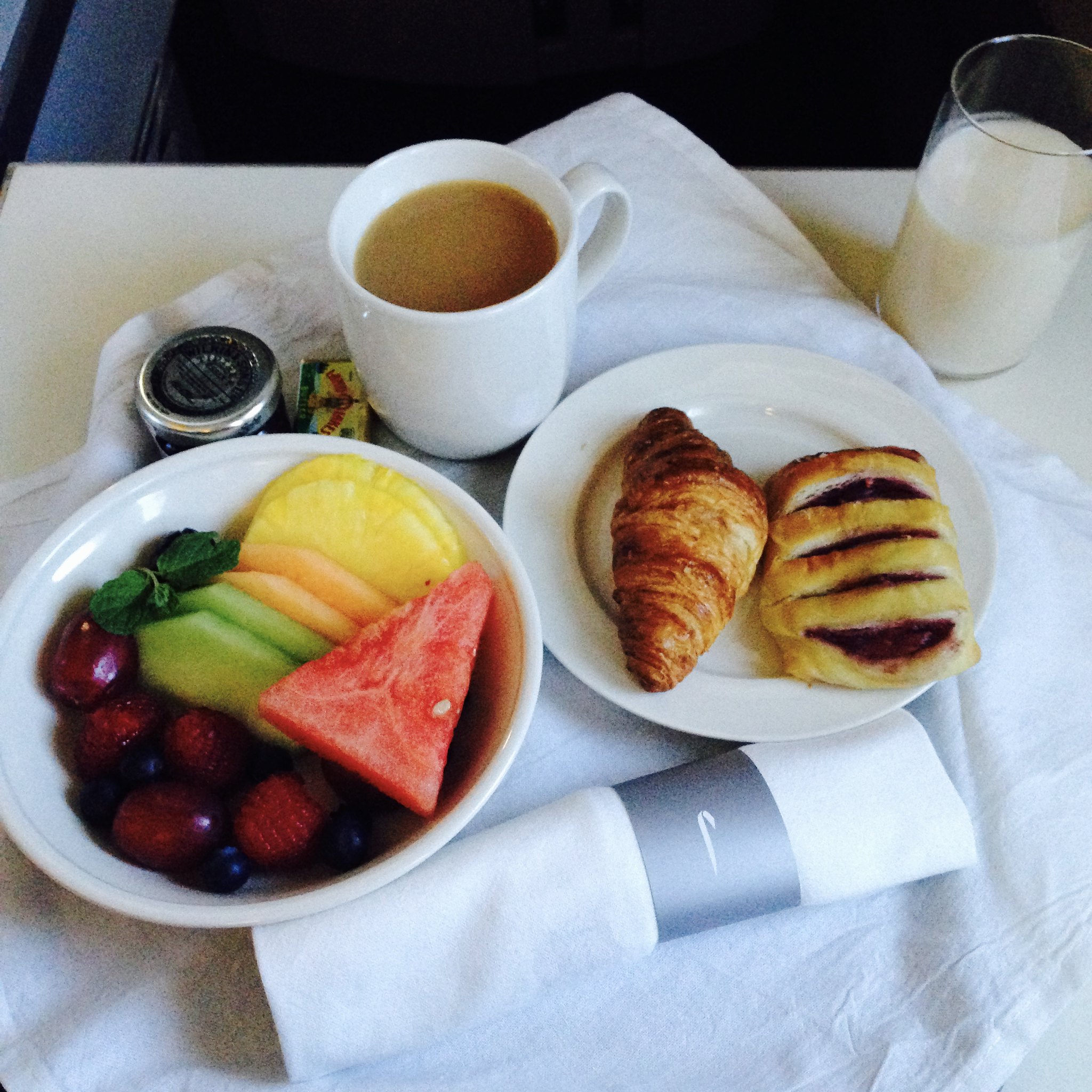 I thought service was very efficient, and the attendants were very proactive during service times. I didn’t really want a second beverage after the pre-departure beverage. But after seeing that I had no beverage, I was asked a couple of times until I finally caved and got an orange juice.

During dinner service, I was also asked multiple times if I’d like to have some wine to go with my dinner.

They have a largish TV screen, which I only utilized towards the end of the flight. I quickly browsed through the movie selection, which seemed decent, but my attention span for TV/movies is so short, that I generally can only watch TV shows. They did have some classics like Friends, and my current favorite, Big Bang Theory, but their selection is highly odd. It’s not like a season or anything, but rather random, non-continuous episodes. For instance, they only had one episode of Friends, and three episodes of Big Bang Theory from different seasons.

One of the nice things about the TV? You can tilt it downwards, and turn into a total couch potato. So, you can like lie down on your seat, and watch it from that position. 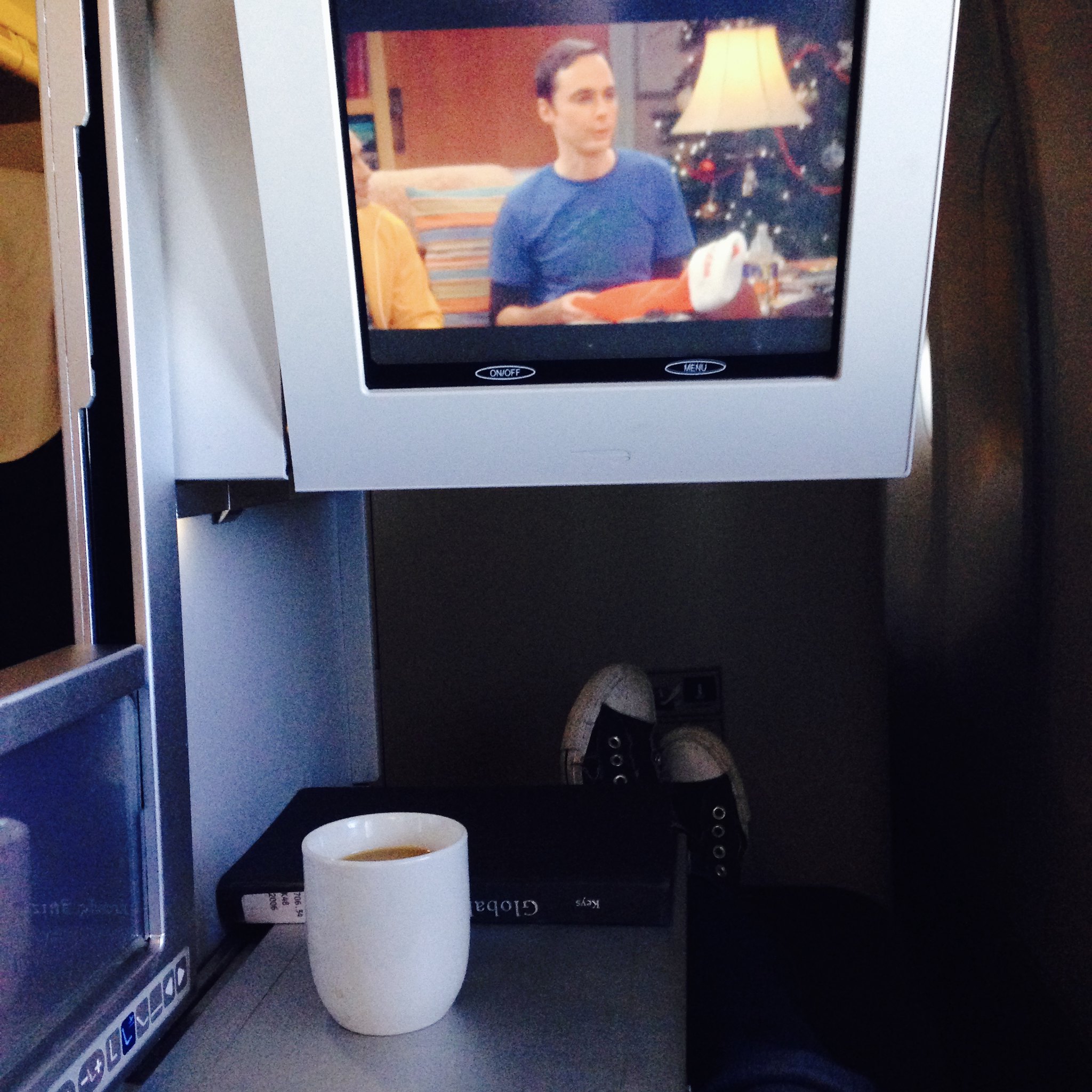 This is actually my first flight with British Airways. I doubt life is as awesome in economy, but well, this was definitely a nice introduction to their airline. Juggling items, and lack of storage aside, I thoroughly enjoyed my business class flight. It was just a shame that I couldn’t sleep more than two hours (there was a yelling kid in the cabin, and I wasn’t tired enough).

Below is the Food/Wine selection from that flight if you’re curious:

A selection of fruit