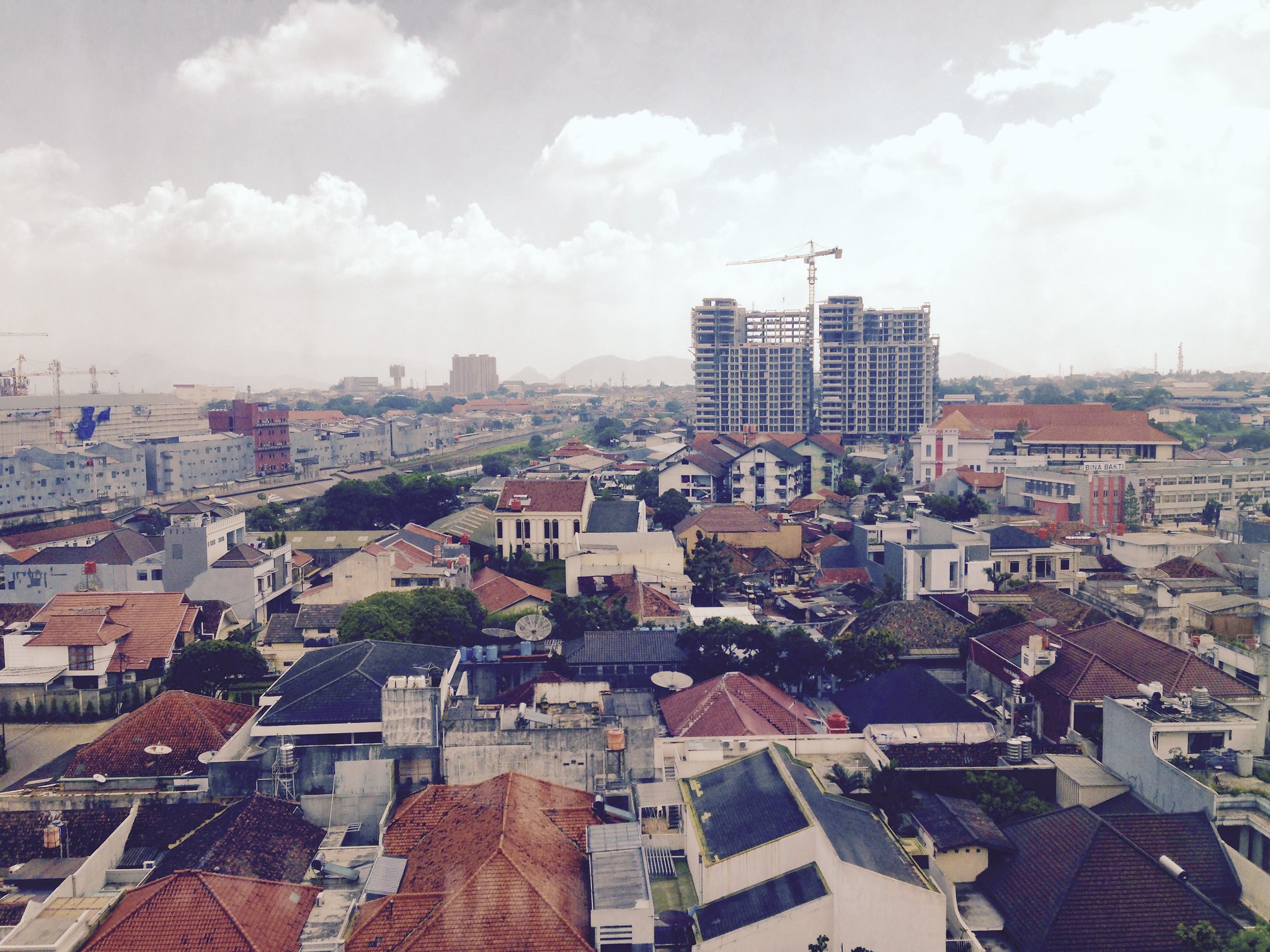 Bandung is an Indonesian city ~100 miles away from Jakarta, and a rather popular weekend spot for Jakarta natives, who wish to get away from the hustle and bustle of the metropolis. Situated at a slight elevation, its climate is slightly cooler. I visited it mainly because it is known for its colonial Dutch art deco architecture.

Getting There and Back

Served directly by the budget carrier, Air Asia, Singapore is a short hop from Singapore. My flight time was under 2 hrs. While it’s not as competitively priced as other regional destinations from Singapore like Bangkok, Kuala Lumpur, or Jakarta (~25 USD one way on any given day) amongst others, it still was not bank breaking at 200 SGD (~143 USD) round trip.

From Airport to Hotel

I got nothing to offer here. I simply took the airport taxi to my hotel, because I was rather sleepy, and wanted to take a nap, instead of trying to figure out where the bus is. It was ~5 Singapore dollars. I did the same for the return trip.

For what it’s worth, Uber is an option, and it seemed plenty cheap when I opened the app. I just didn’t want to use it because I didn’t have the time on the day of departure. 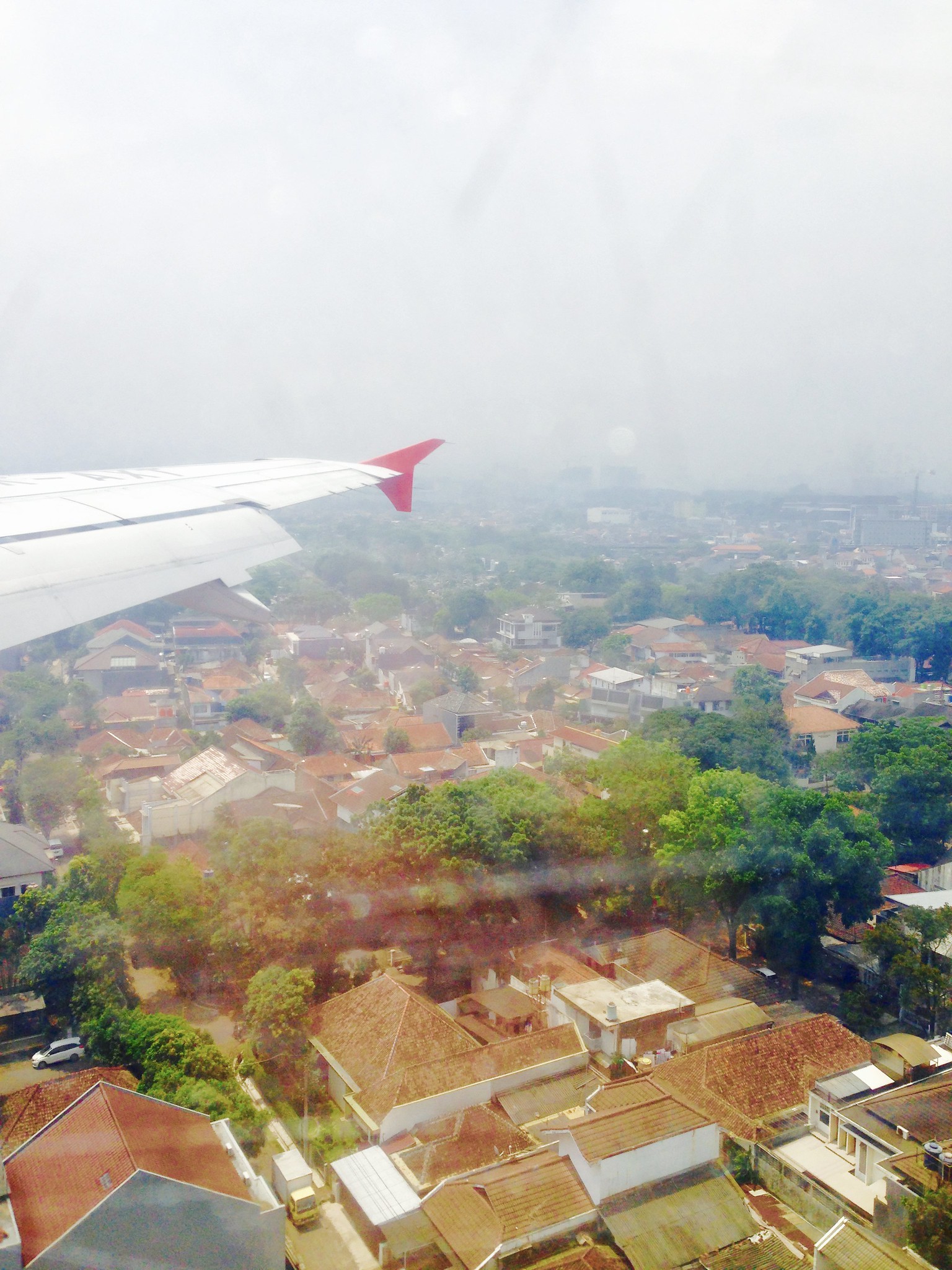 I wish I had something to offer here as well, but nada. I simply walked from point to point. The traffic was pretty intense, so walking wasn’t the worst solution. My sense of direction didn’t really help much, but I’m generally ok with getting lost, and I did manage to see most of the things that I wanted to see. 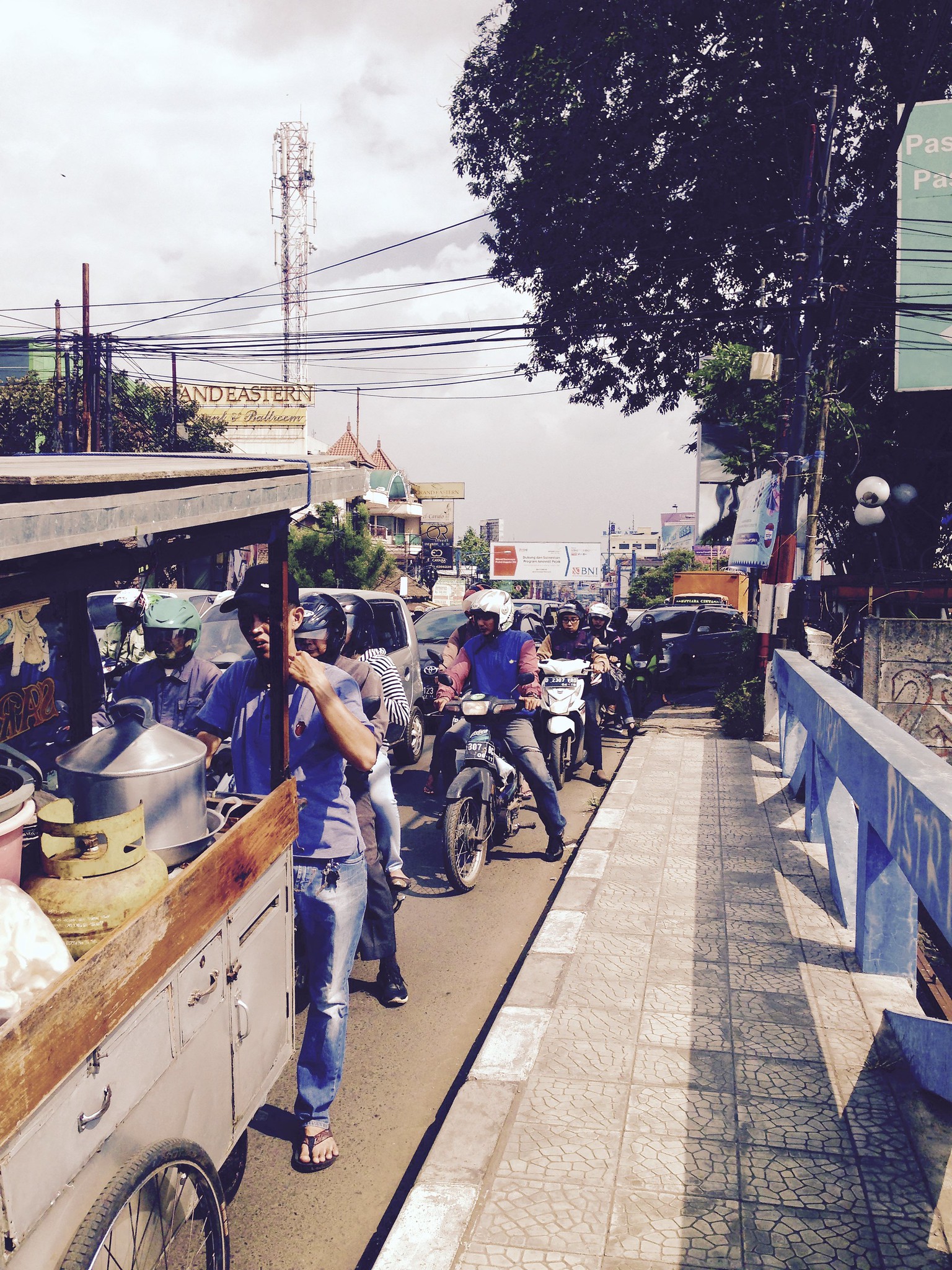 After my nap, I actually wanted to get a late lunch. According to google maps, there’s a food market beside my hotel. After walking for like 100m, and not finding it, I gave up, and simply tried walking to town instead.

It’s been in a while since I’ve lived in Southeast Asia, so navigating the streets with its mad traffic was rather daunting for me. It took me a good 5 mins before I figured how to cross the road with no traffic lights, and cars coming straight at me.

I was trying to get to the Jalan Braga strip, and I tried getting there based on a mental map I had of Bandung. That did not work out too well. I was also hungry at this point, so I was in a simultaneous mission to hunt for food, so I simply let my senses guide me. 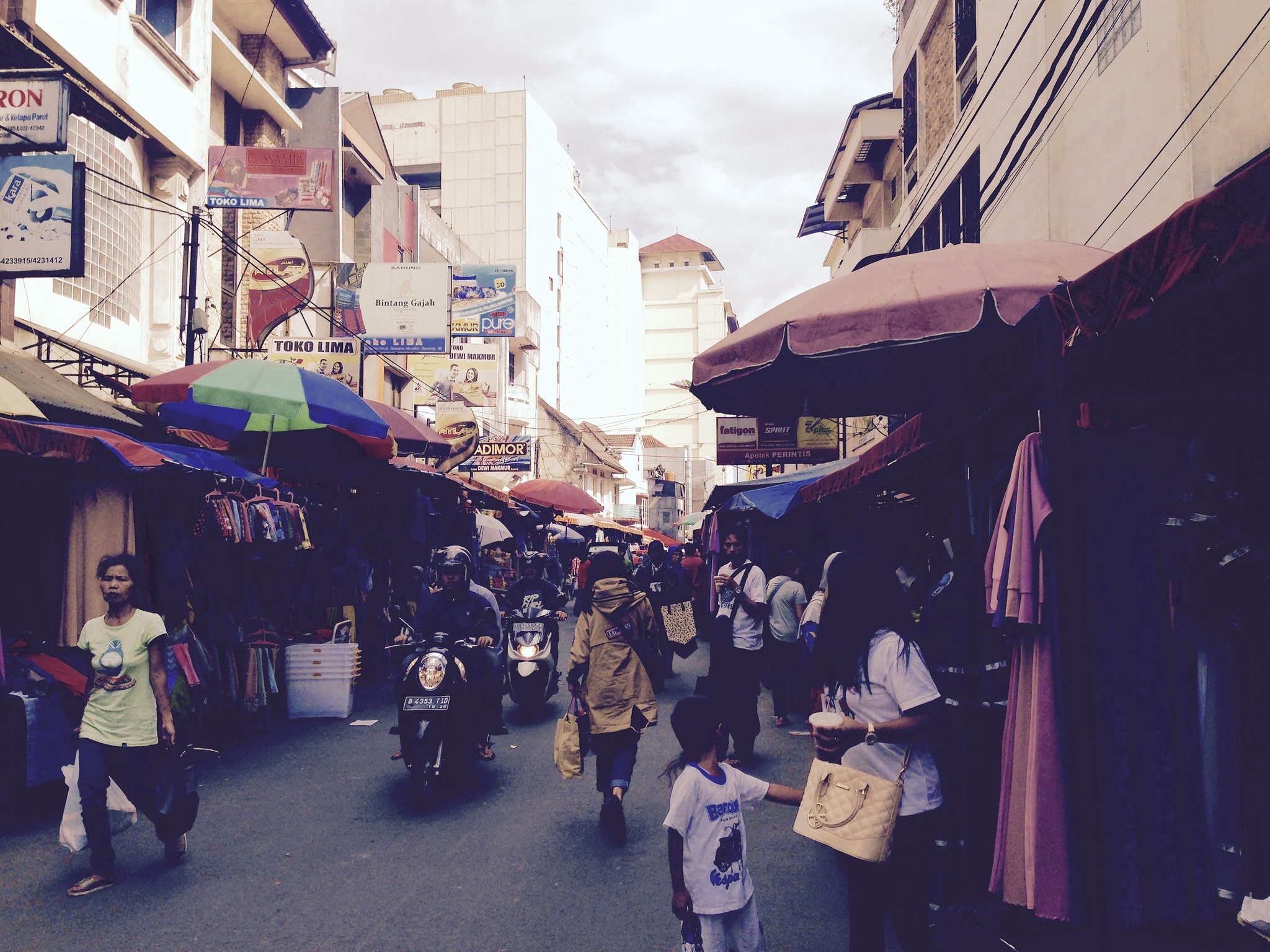 I ended up at a street market with some food vendors by the side. I think I almost bought a mie bakso (noodles with meatballs), but ended up chickening out at the last minute, because I lived in the US for the last 6 years, and I no longer have a strong digestive tract. Also, the wait for the mie bakso gave me the time to second guess decision.

Eventually, I wound up at Pasar Baru mall, where they had a food court at the fourth level. After scouting around my options, I ended ordering a bebek goreng (fried duck). It wasn’t the best, but the avocado shake did make up for it. I’m definitely turning into a total wimp – the sambal actually kicked my ass.

By this point, I was exhausted from all the walking and the over-stimulation, and just decided to go back to my hotel and call it a day. Tomorrow needs more research! 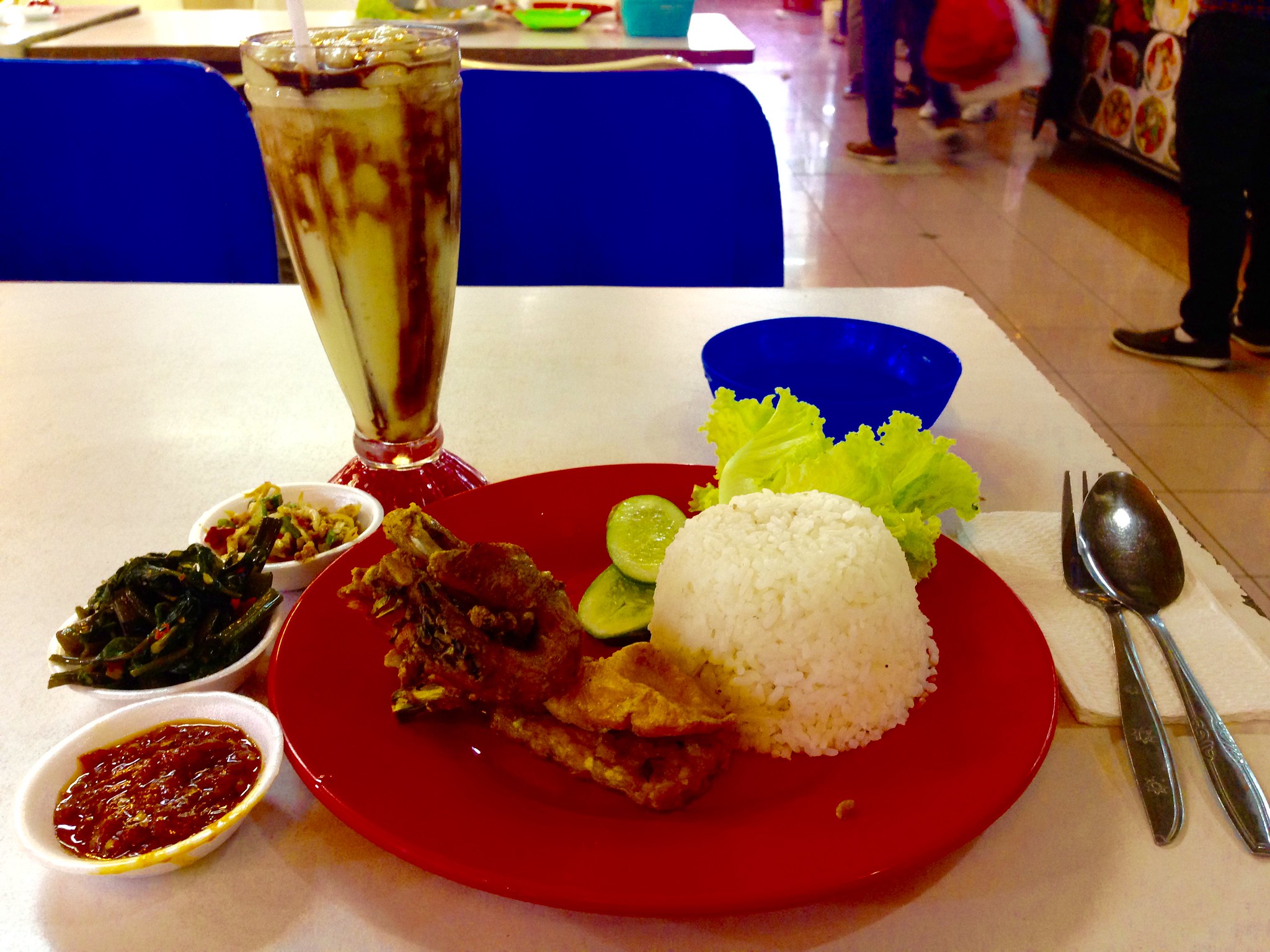 The main items on the agenda: visit the Jalan Braga, visit the Museum Konferensi Asia Afrika (Museum of Bandung Agreement), go to a café, and get some work done. Bandung is the home of some cool cafes, but most of them involve a car ride. One of them is even in the mountains! I found one that’s (somewhat) within walking distance, so I settled on that.

The route to Jalan Braga is actually the same one that took me to the street market – it iss just a lot further. But this time, I decided to walk alongside the train tracks. It was a good decision, as I saw some pretty cool graffiti, including one that comments on various political massacres in Indonesia’s recent past. 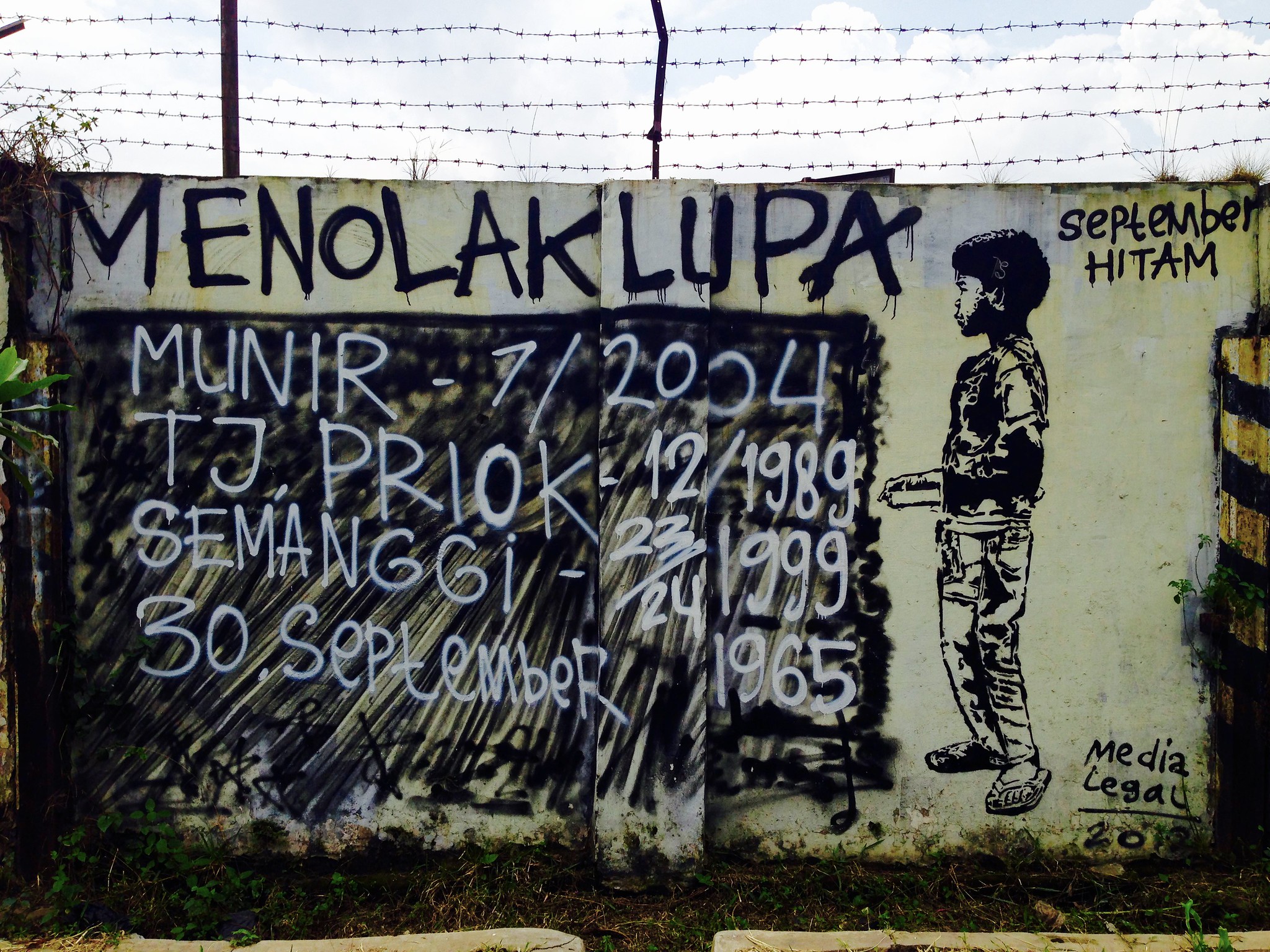 Jalan Braga is fairly touristy. There are occasional artists selling their works by the sidewalks. I enjoyed taking in the art deco of the shophouses along the strip. At the end of Jalan Braga, stood the Museum Konferensi Asia Afrika (free admission). The museum building itself is pretty nice, as are the Dutch colonial era buildings near the museum, but the museum content itself is not the most interesting. Well, at least it’s free, right? 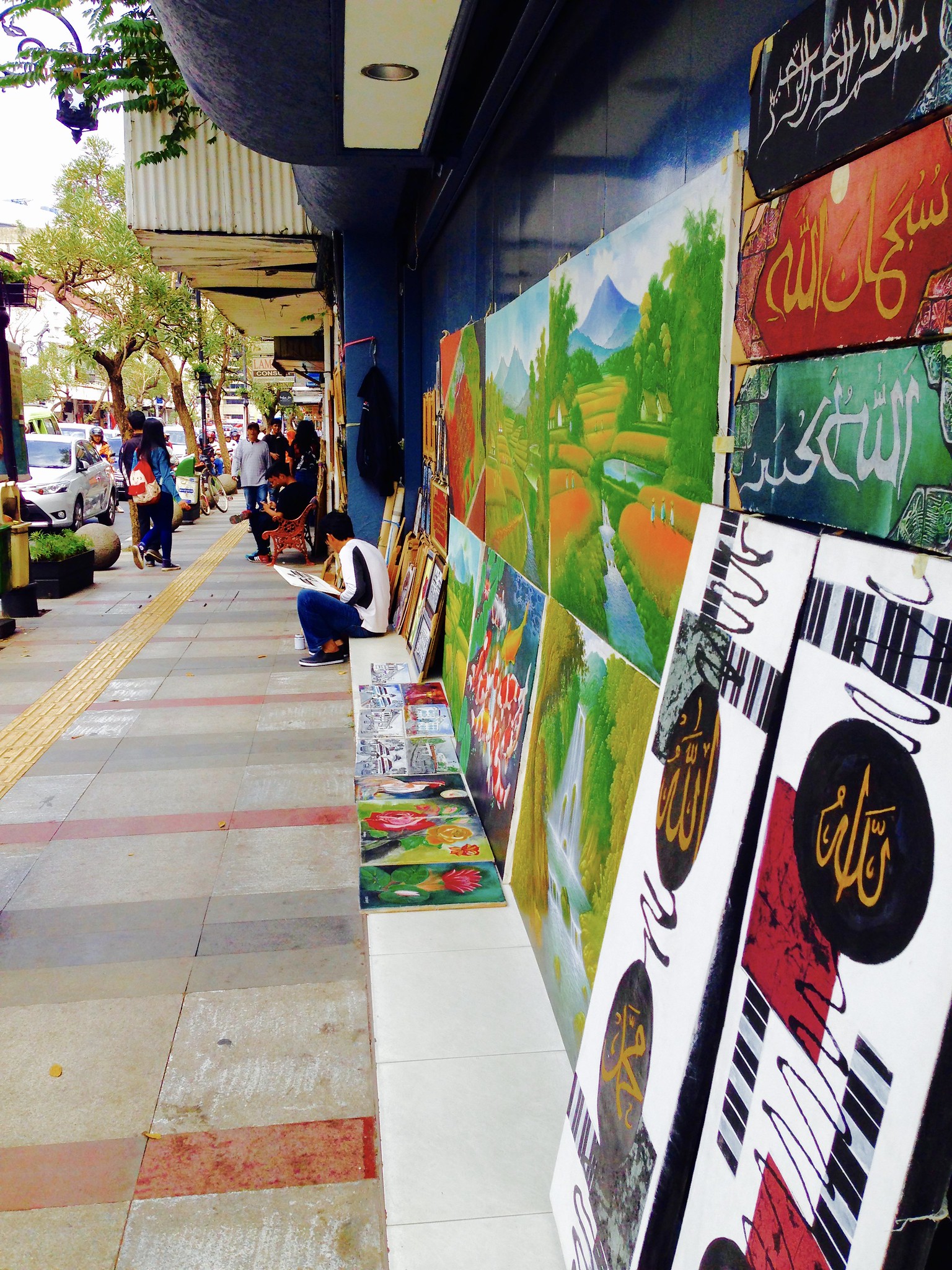 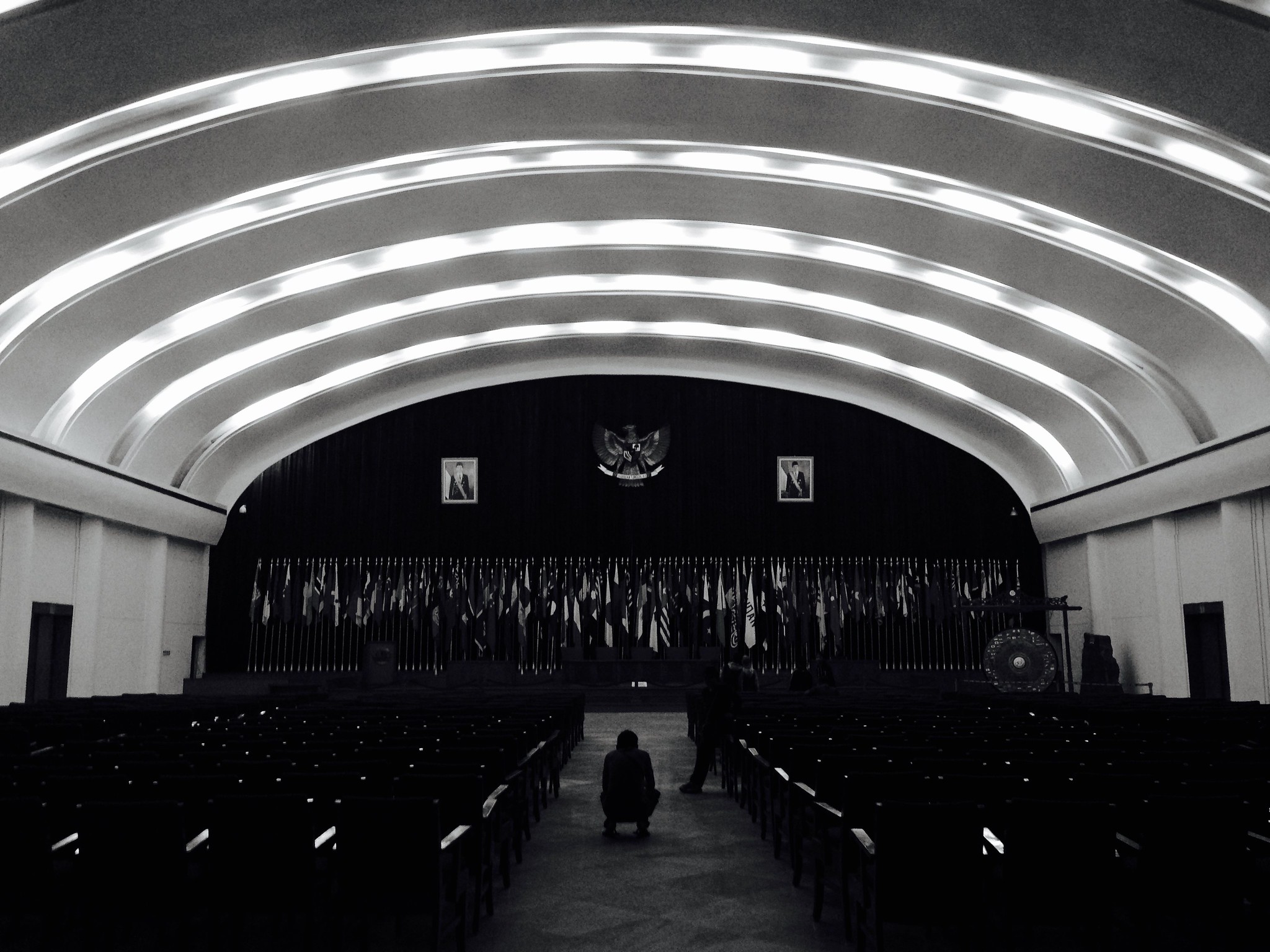 All the walking in the heat was getting to me, so I decided to stop off at a café to get some reading done. Walking along the strip, I ended up popping in Braga Art Cafe, which has a cool tile flooring, and high ceilings. I managed to read an article with my iced latte before the mosquitoes ate me alive, and I had to keep moving again. 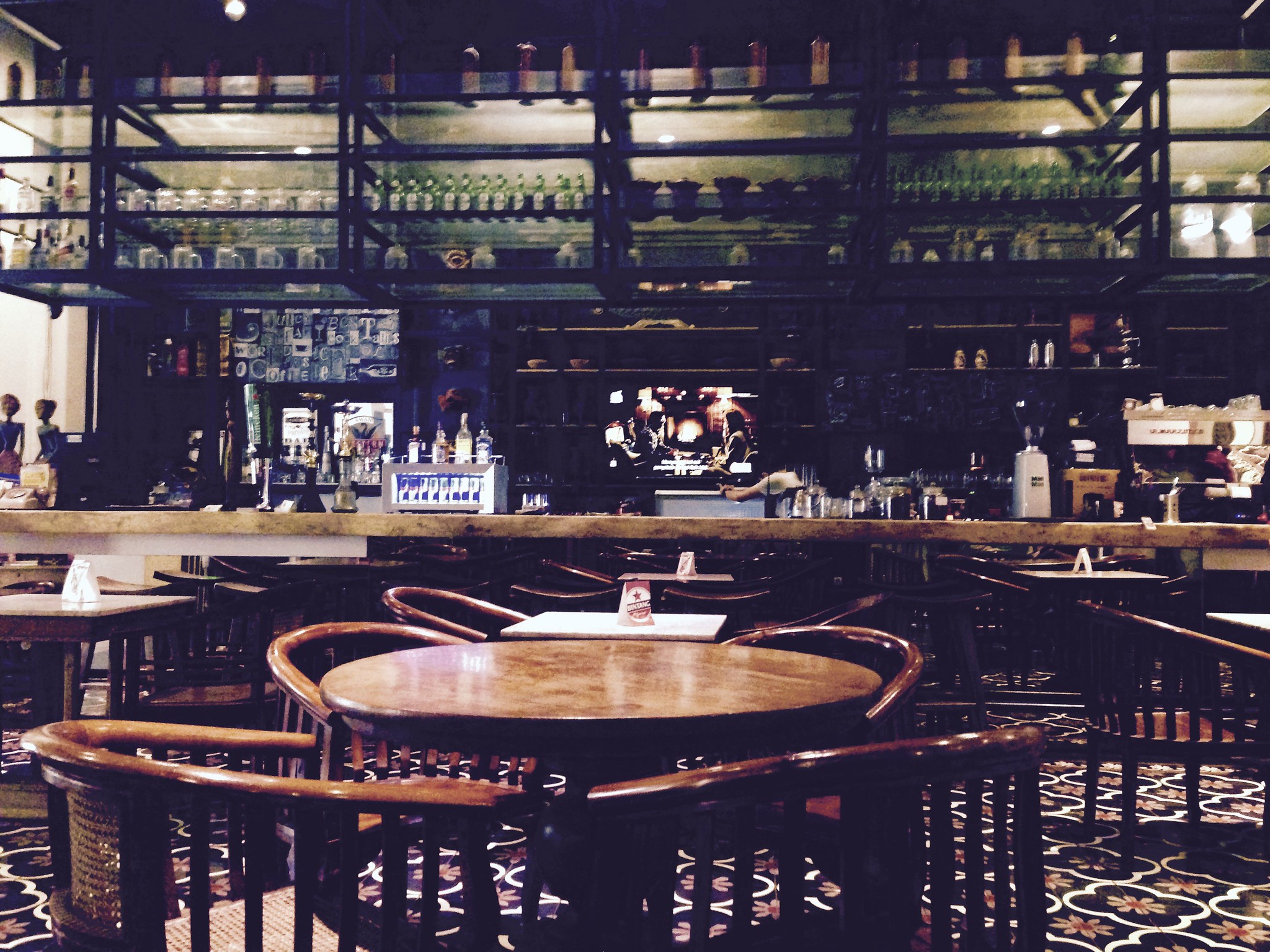 Next began the odyssey to nowhere. I walked past the Bandung Government Office, gardens, train tracks, mosques. At one crossroad, I took a wrong turn, and completely derailed my program to find Hummingbird Eatery at Jalan Progo. I guess having a mobile dataplan would have solved my problem. As much as technology would have solved my problem, I guess sometimes, I don’t actually care if my problem gets solved. I enjoy the process of exploration. 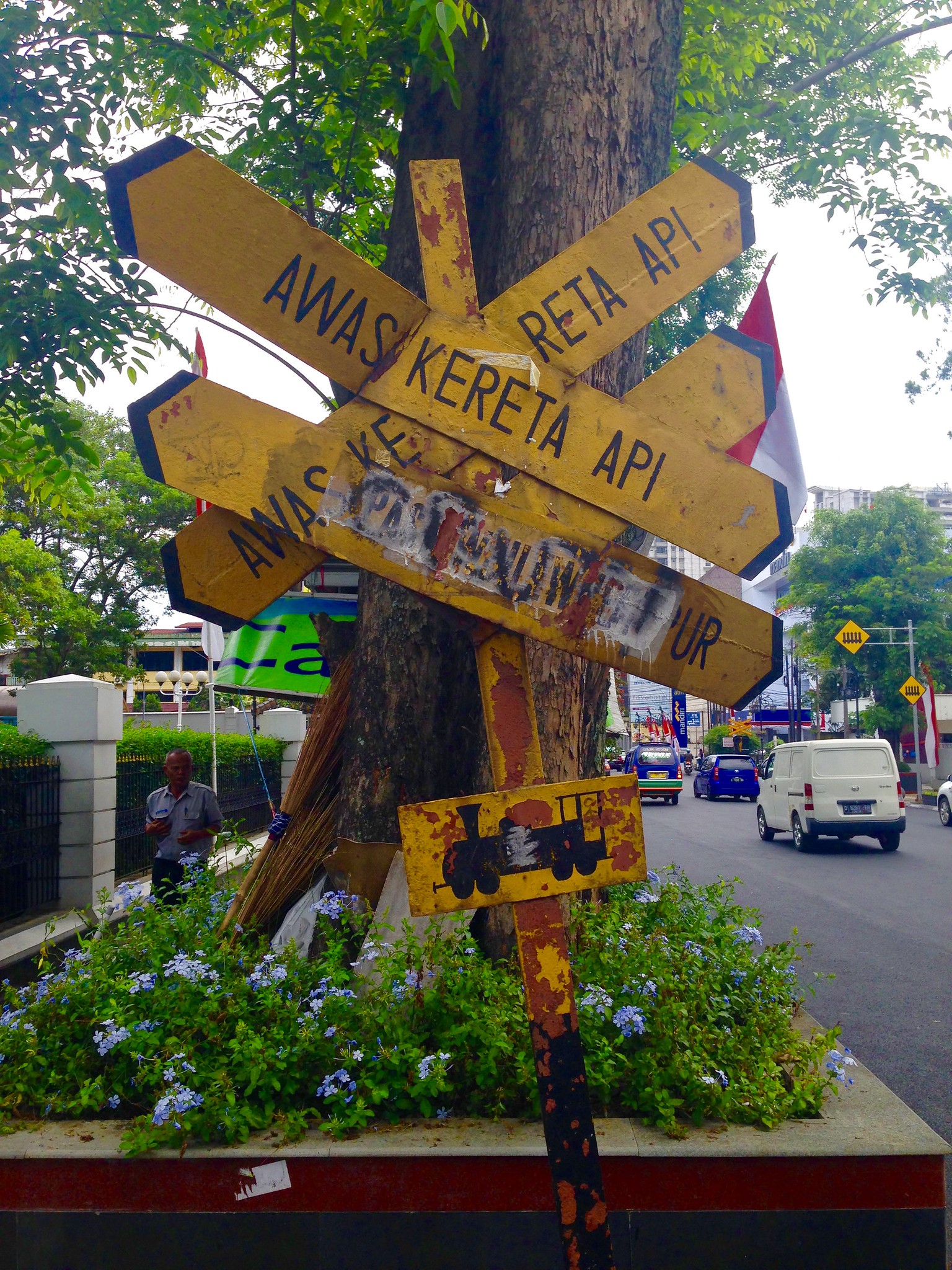 Exhausted, I decided to simply walk back to my hotel by a different route. The detour took me on quite an uphill climb, and a true detour it was. I guess I’m getting my daily exercise, one way or another! I eventually made it back to my hotel at around 6 pm. 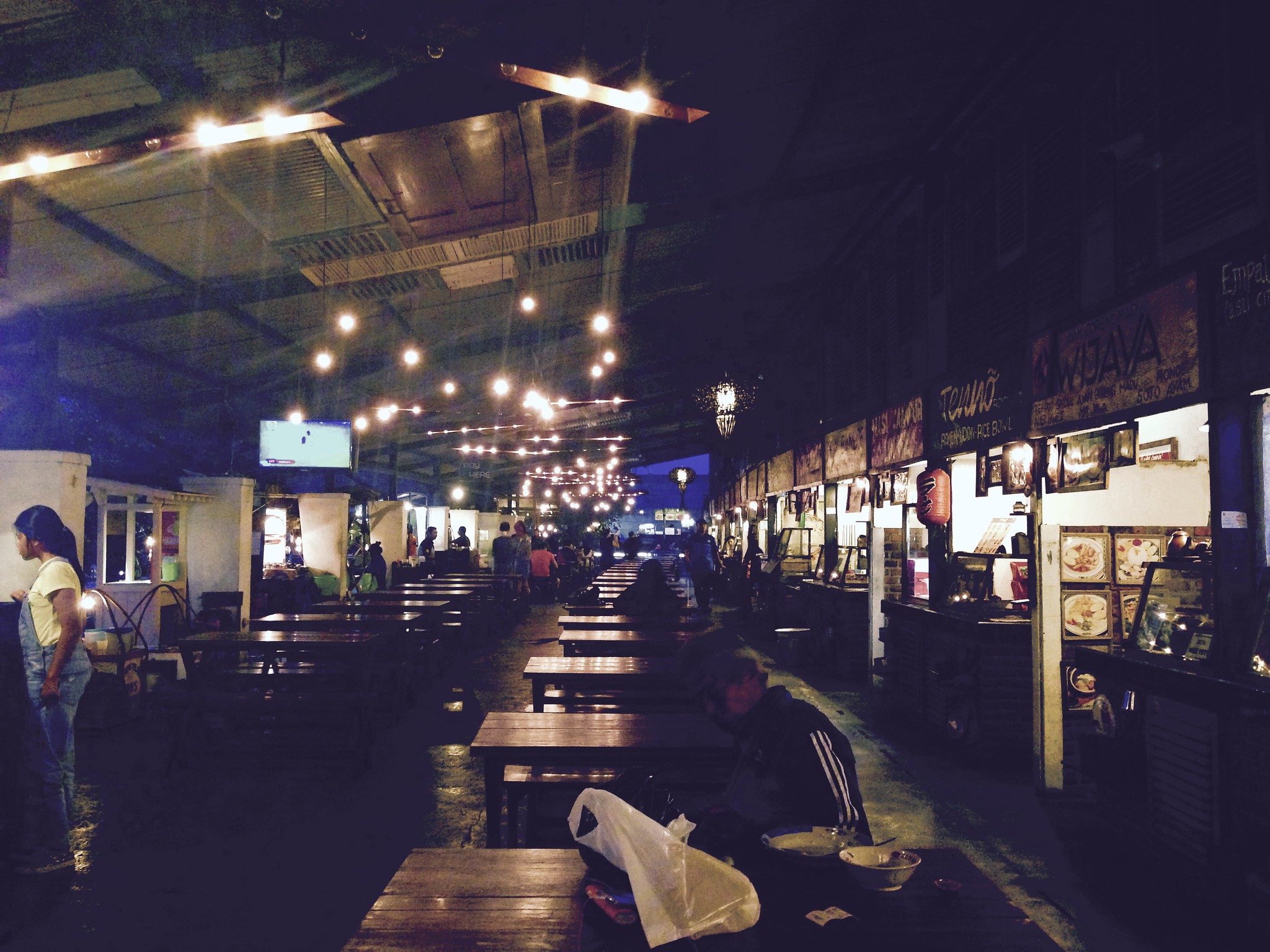 Final mission: finish what I did not finish the day before. I finally found Paskal food market, which is the Bandung equivalent of Singapore’s hawker centres, where they gather street vendors at one spot. I tried Mie Kocok Baso, which was very cheap at ~2 SGD. To my disappointment, they were out of avocado shakes. I do recommend checking out Paskal food market to sample some Indonesian food. 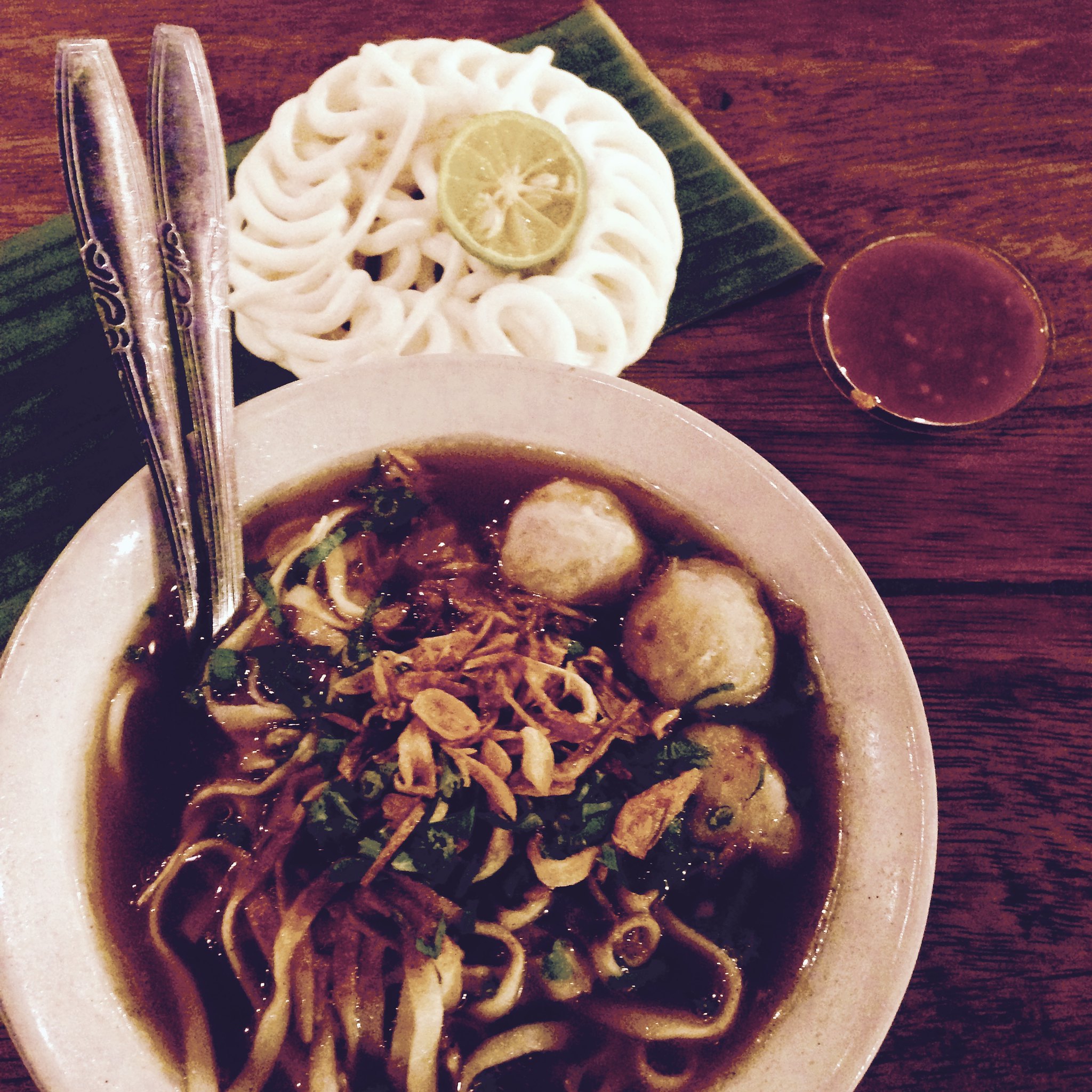