Back in June 2015, I signed up for Citi’s Hilton Reserve, which gives 2 weekend nights in any Hilton property anywhere in the world after spending $3000 in 3 months. This set the wheels in motion. Where could I go that I’d never pay for? Maldives.

Maldives has always struck me as this expensive, couples/honeymoon place. Almost everyone I know went there for their honeymoon and shelled out a 5 figure sum. I like beaches, climate change and rising sea-levels are winning against places like the Maldives, so I sure as hell was not going to depend on finding someone before mother nature wins!

The Conrad Maldives retails from $500 to $900 for their regular rooms (and up), so this was a perfect candidate for me to blow my two free nights, and not shell out a lot of money. I also get to check another country off my list. Travel hacking for the win! 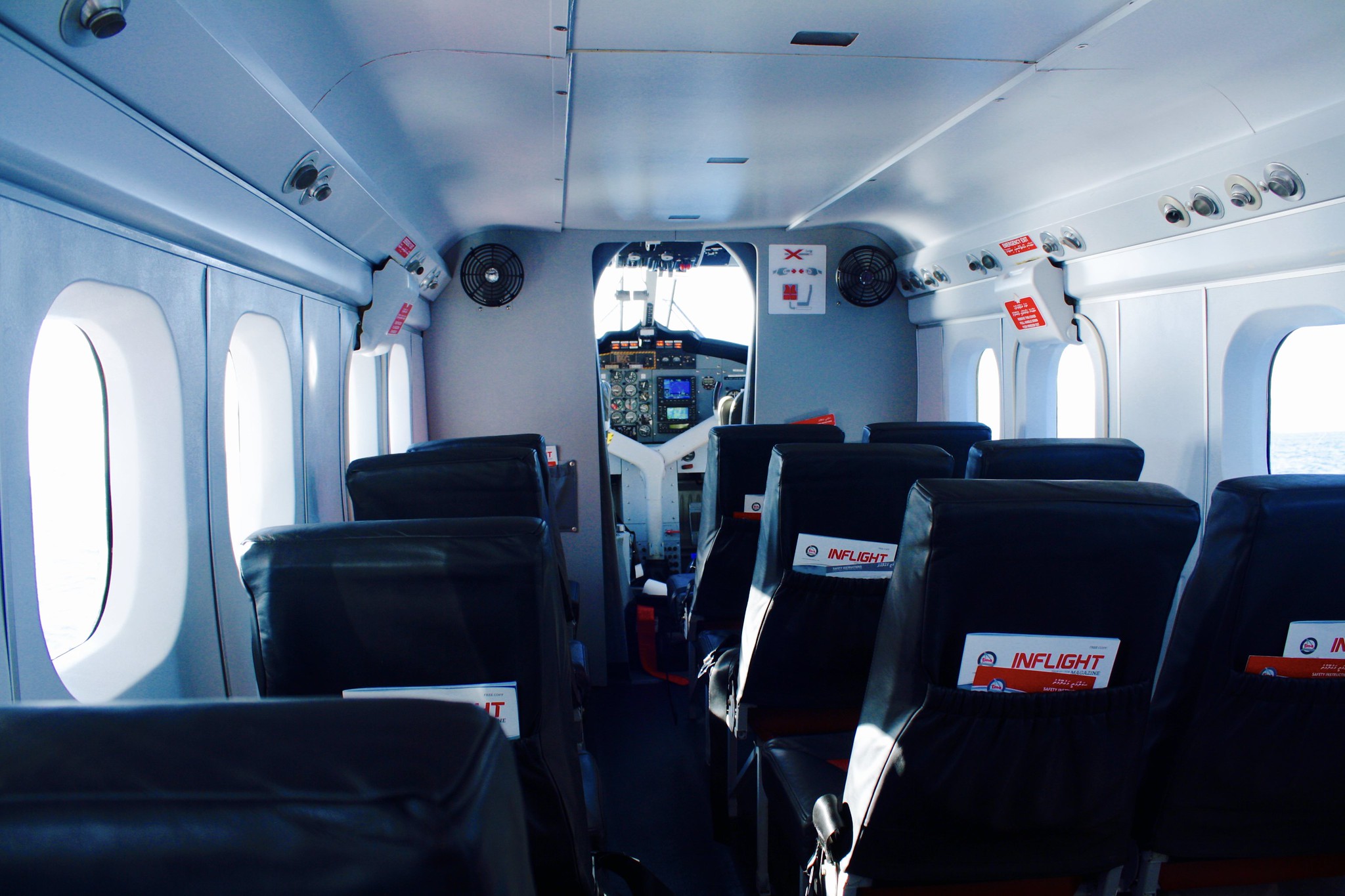 Getting to and from Male and Rangali

At this point, I moved back to Singapore, so getting to Male wasn’t difficult. I did make a bit of a mistake, because I actually booked a one way mileage ticket on Singapore Airlines. That cost me 15,725 Krisflyer miles, and more importantly, 139 USD. I could have done things differently, because the taxes on the award is almost the same price as a one-way on the budget airline, Tigerair, which also flies direct to Male. It has a less-than-ideal timing, but I could have just paid more, and saved some Krisflyer miles. But as luck would have it, things worked out in my favour, because the Singapore Airlines flight I took was full so I did a voluntary bump, and got 250 SGD in cash, getting there a couple of hours later. For my trip back, I simply booked a Tigerair one-way flight for 220 USD. It could have been a lot cheaper if I didn’t book it at the last minute.

The real big expense, is getting from Male to your resort. As long as you are on one of the standalone resort-islands, you have to take a seaplane, and there’s no way to avoid the 500 USD per person round trip charge, so that was a big one for me. 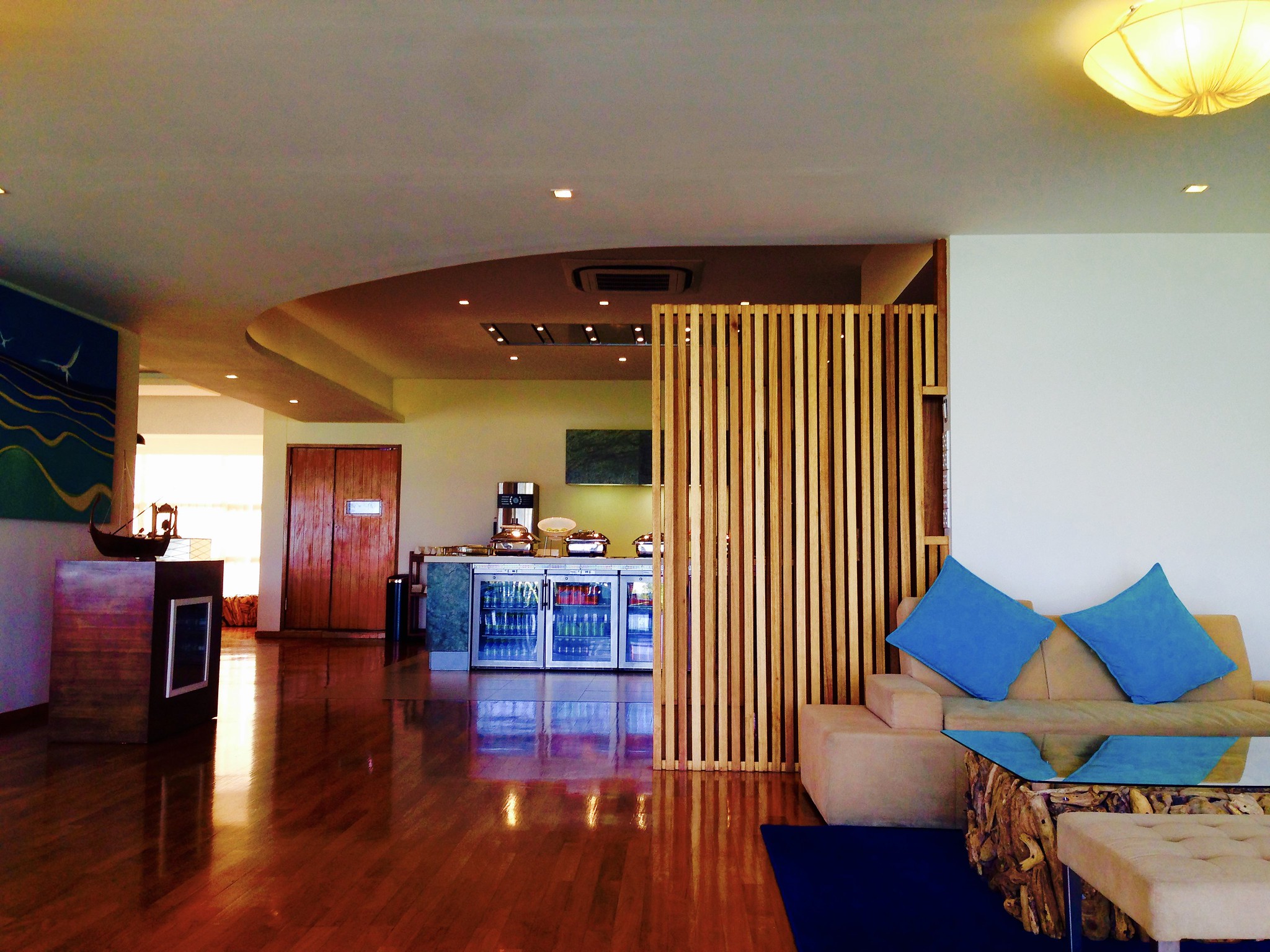 Despite my stay being an award stay, I’d say that their communications were excellent. A week or so before my stay, I got an e-mail from their pre-booking coordinator, asking for details of my flights, so they could arrange my seaplane transfer to Rangali.

Additionally, I was very interested in dining in Ithaa, their underwater restaurant, so they were also able to secure a reservation for me as well.

Even as a Hilton Diamond, I wasn’t expecting any upgrades on the property from their (already humongous) beach villa, which is the standard room, but I did ask if they would assign me a room on the sunset side of the island, which they did!

What was impressive, was when I threw a monkey wrench in their plans with my voluntary bump. Right after the bump, I shot them an e-mail, and their team actually arranged alternative plans, and managed to still get me to Rangali with very little downtime. 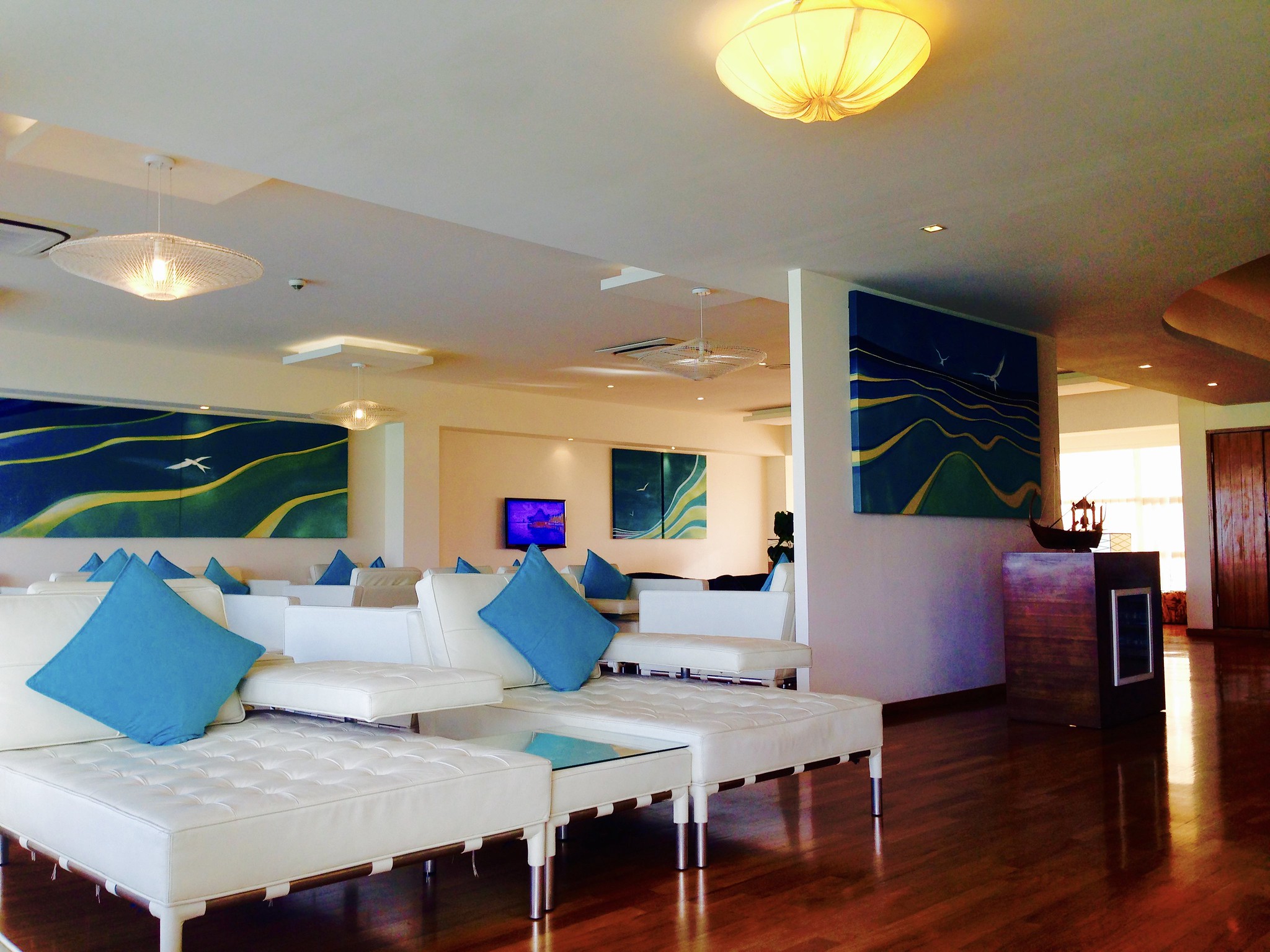 Upon arrival, I was met at airport by a staff of Conrad, who then handled all the details of my seaplane transfer. Shortly after that, I was put on a coach, and driven to the Conrad Lounge. The Conrad has a special lounge for its guests waiting for the seaplane, and it was excellent. 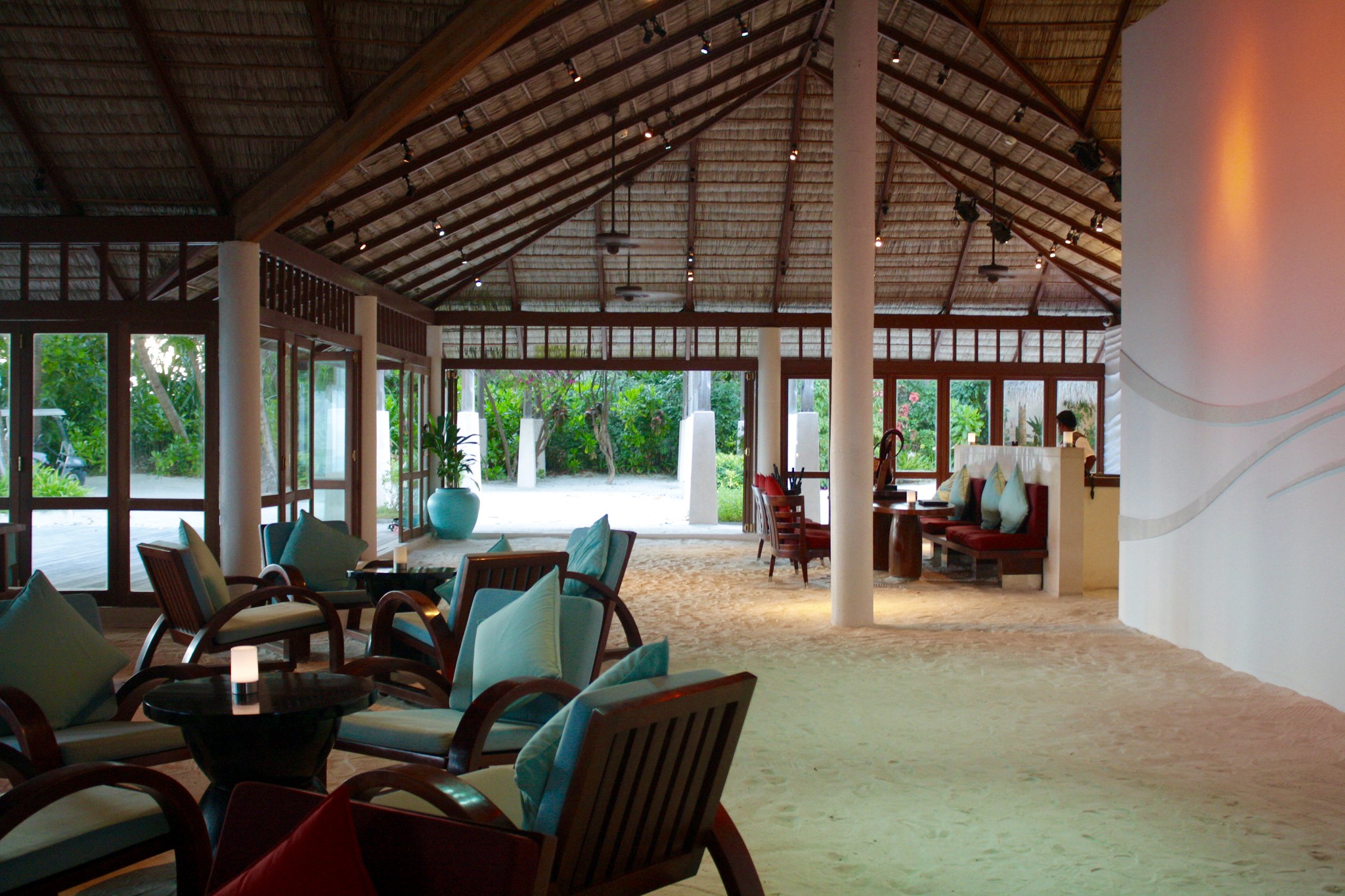 Very painless process. I was introduced to my concierge, who’s in charge of my stay, and he gave me a set of brochures for reference. There is also a small waiting room after check out, where you can get refreshments while waiting for the seaplane.

The reception area is also covered in sand, which enhanced the whole island feeling of the resort, and puts you in the mood for a vacation right away. 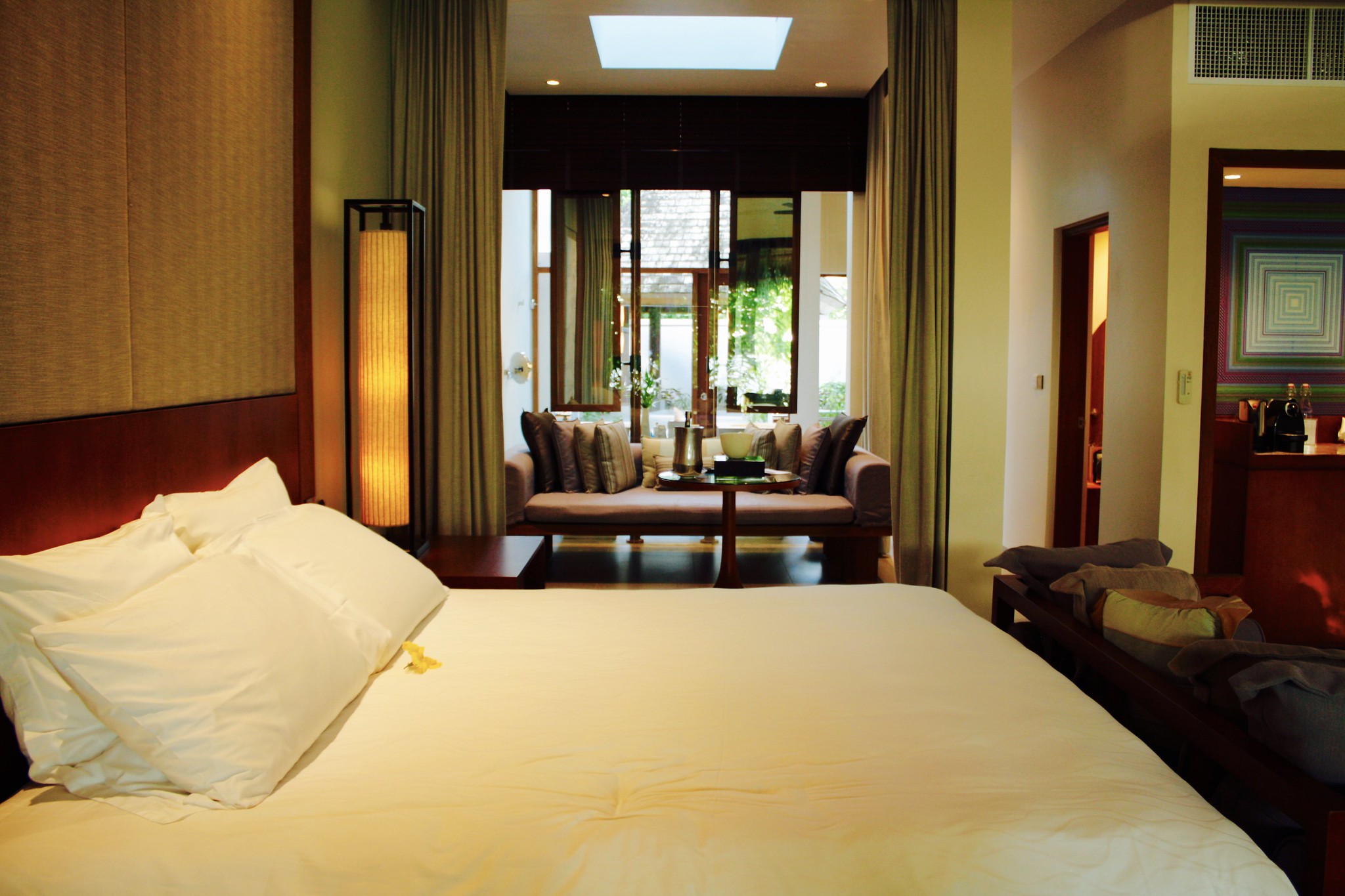 I got a standard beach villa, which is a massive 150 sq m/1614 sq ft. My room was a renovated villa. Previously, there was a water fountain in the villa, which created a lot of dead space, but that has since been replaced by incorporating that space into the room, putting skylights and a daybed.

Broadly, the villa has three areas. There’s the outdoor shower, which comes with a soaking tub. Enclosed within the room, are double vanities. If you so desire, there’s also a clothes line near the door, so you can dry your swim wear after a fun day at the beach. The walk-in closet is also in this area. 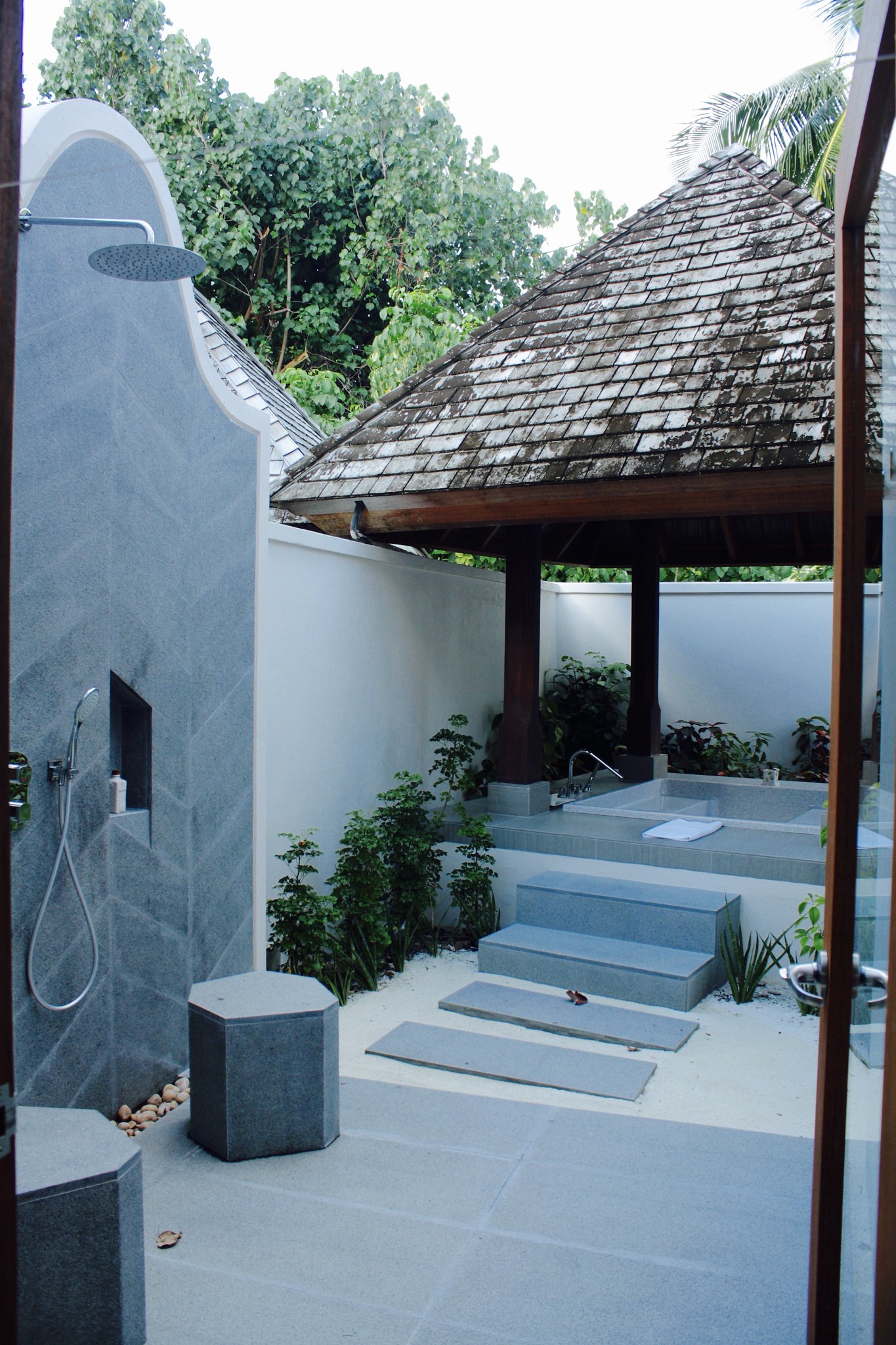 In the middle section of the room, there’s the day bed with a coffee table. There are curtains, so if you have a small child, or a third adult, you can always sleep the extra person here, and still get some level of privacy. These curtains are thin though. Close to the daybed is the toilet and one more sink.

The bed/sleeping area takes up majority of the space in the room. There is a king sized bed facing the TV, and a sofa by the foot of the bed, if you want to watch some TV. There’s also a desk by the corner, and opposite the desk, there was the fridge with the Nespresso and an electric kettle. Guests are supplied with water, and if you want ice, just call housekeeping for ice. 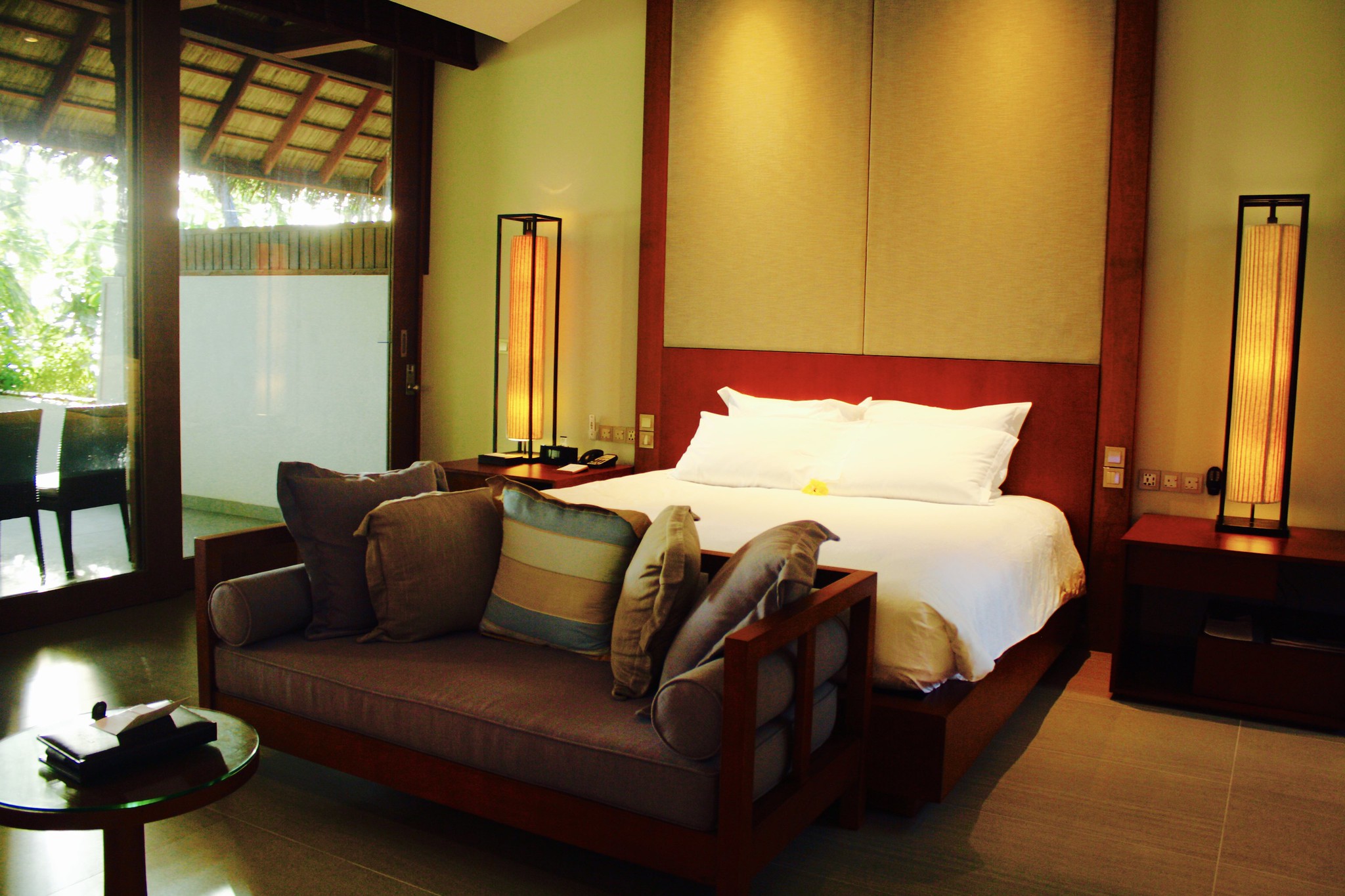 Each beach villa also has offers beach access. Just outside the room, there are a couple of chairs and loungers if you wish to spend time outdoors, but still shaded. This leads directly to the beach. And by your personal strip of beach, there are also loungers, along with beach towels. 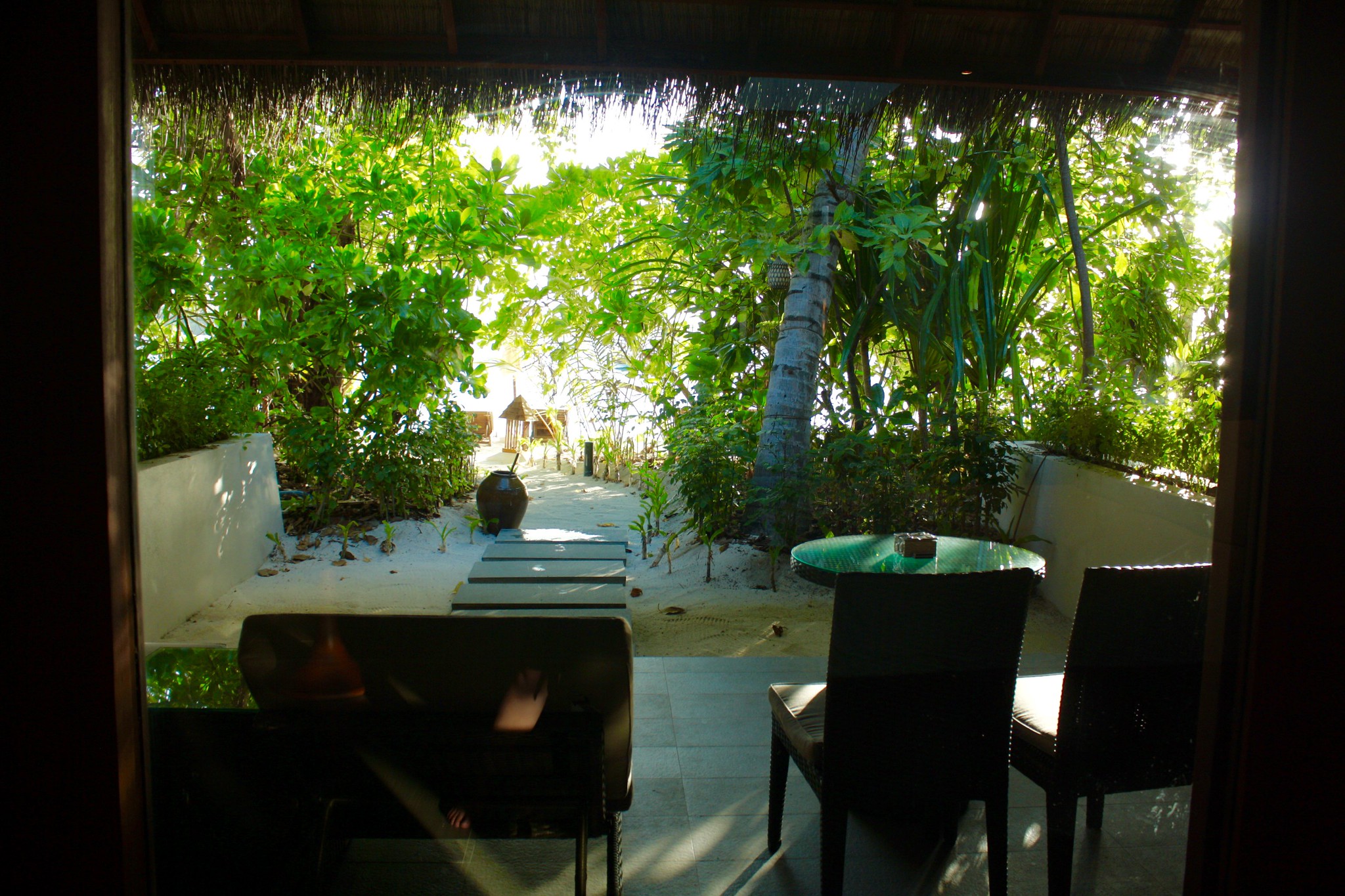 The set-up is simply amazing. 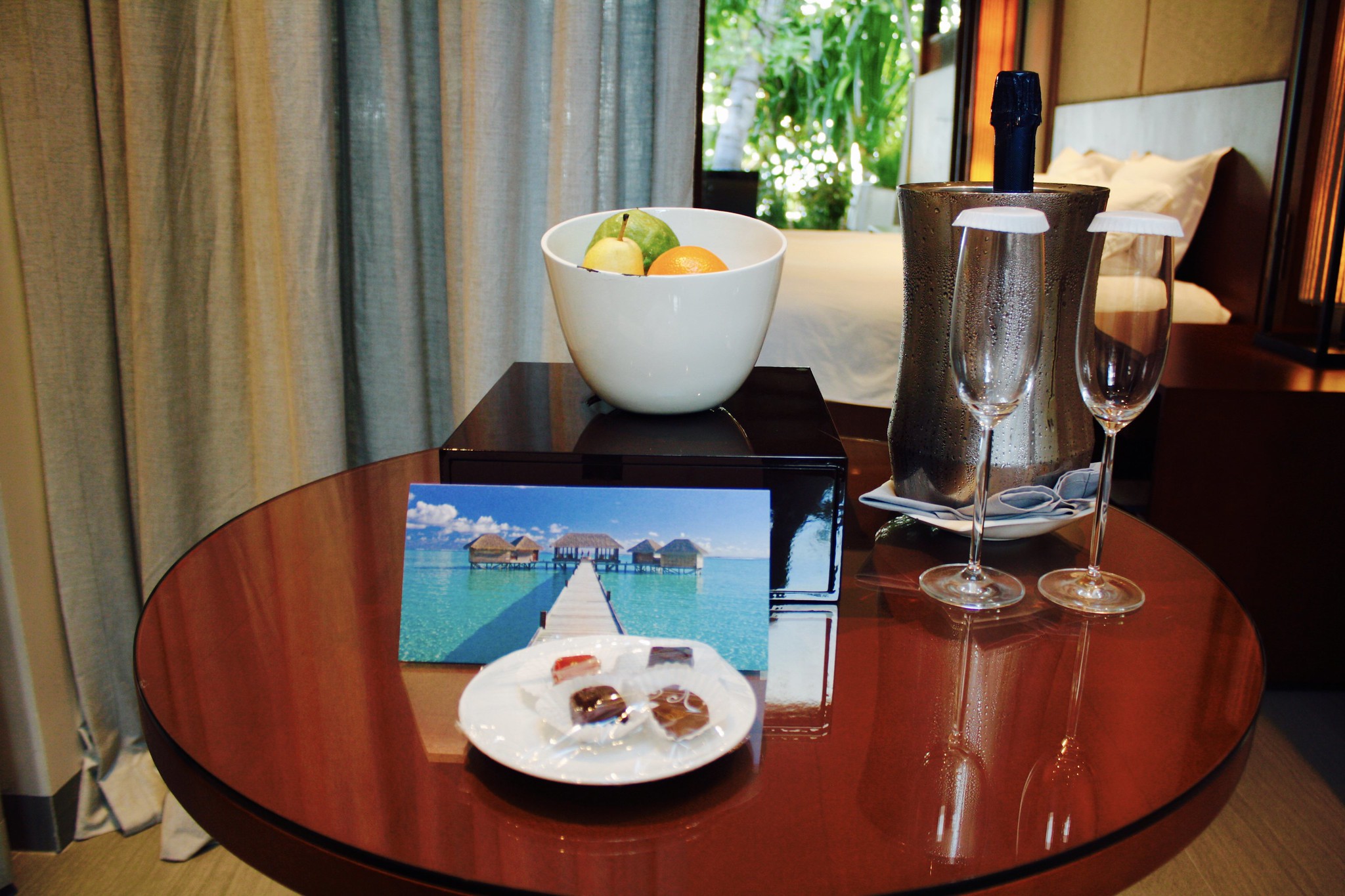 As a Hilton Diamond, there’s complimentary breakfast in the two restaurants that offer breakfast on the island. It’s a buffet with an excellent selection. I particularly loved their smoothies. If you eat late enough in the day, you probably can turn it into a brunch and simply eat dinner, saving some money. This represents some serious cost savings, because everything in the resort is expensive. 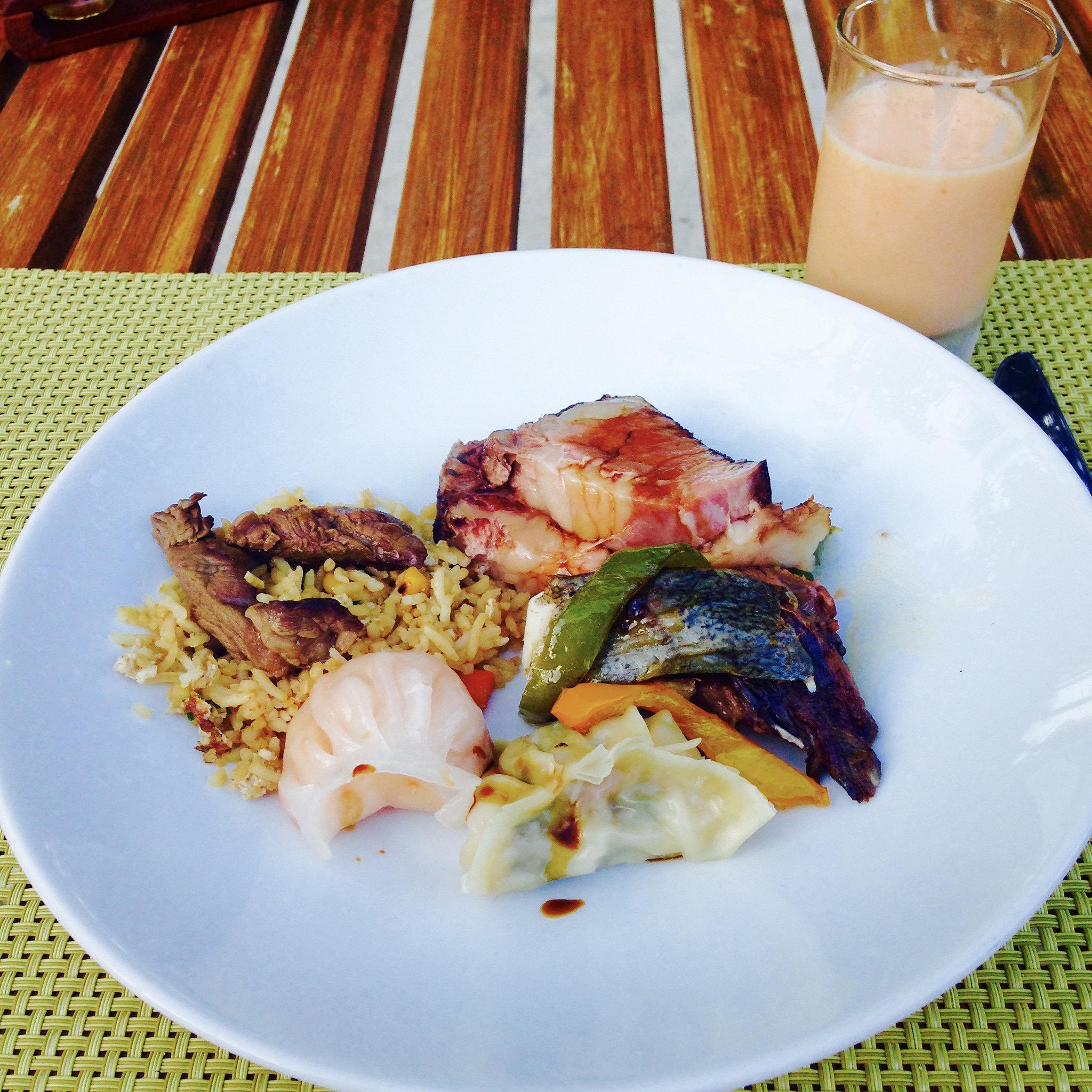 In addition to breakfast, there is also a complimentary tea break at Mandhoo Restaurant, featuring finger sandwiches, and coffee/tea. Think of it as a dainty high tea. Also, they offer a cocktail hour at the Vilu restaurant as well for diamonds, should you wish to obtain a complimentary alcoholic or non-alcoholic beverage. I went with a mocktail, which was tasty. 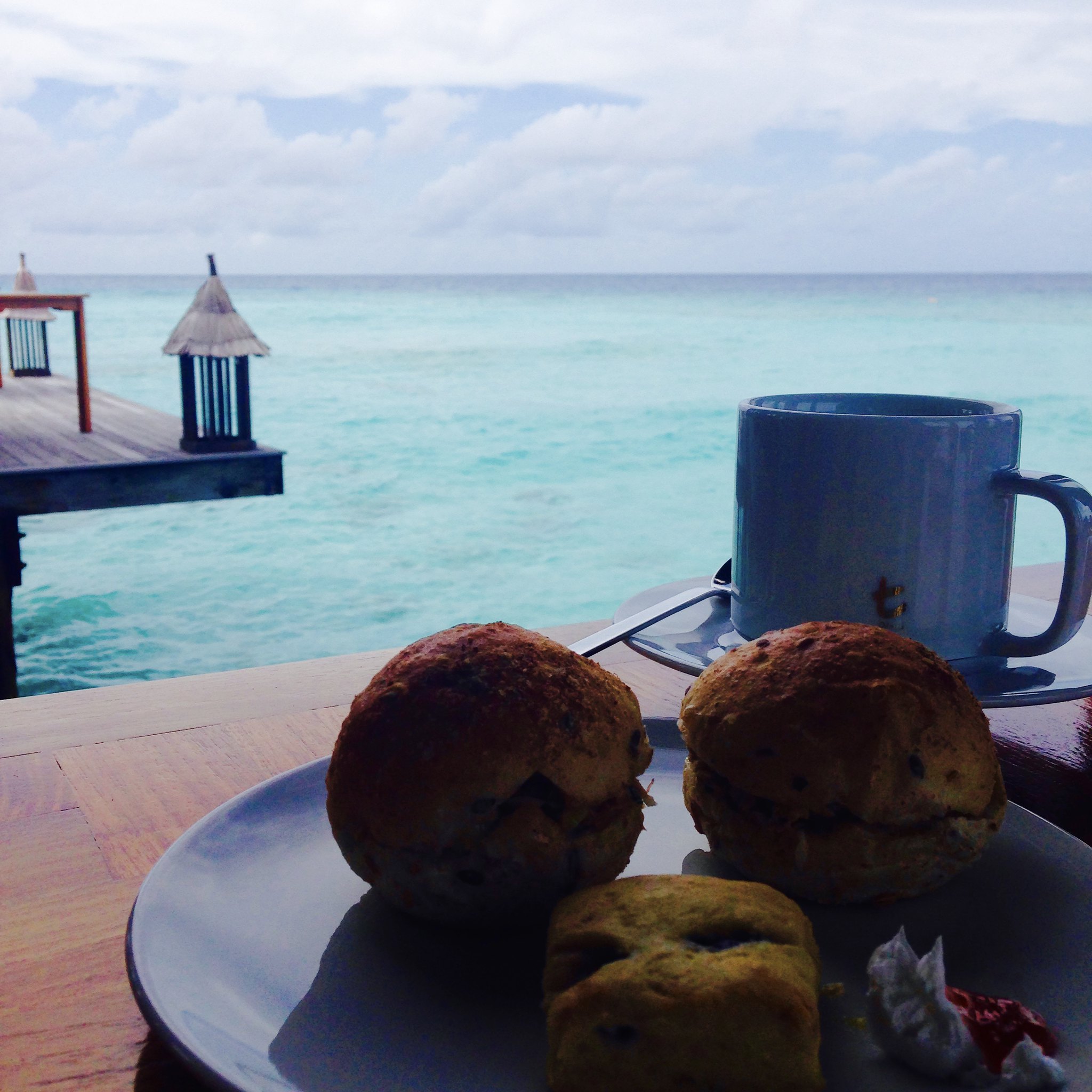 My room was also stocked with diamond amenities. There was a sparkling wine, a bowl of fruit, and some chocolates. 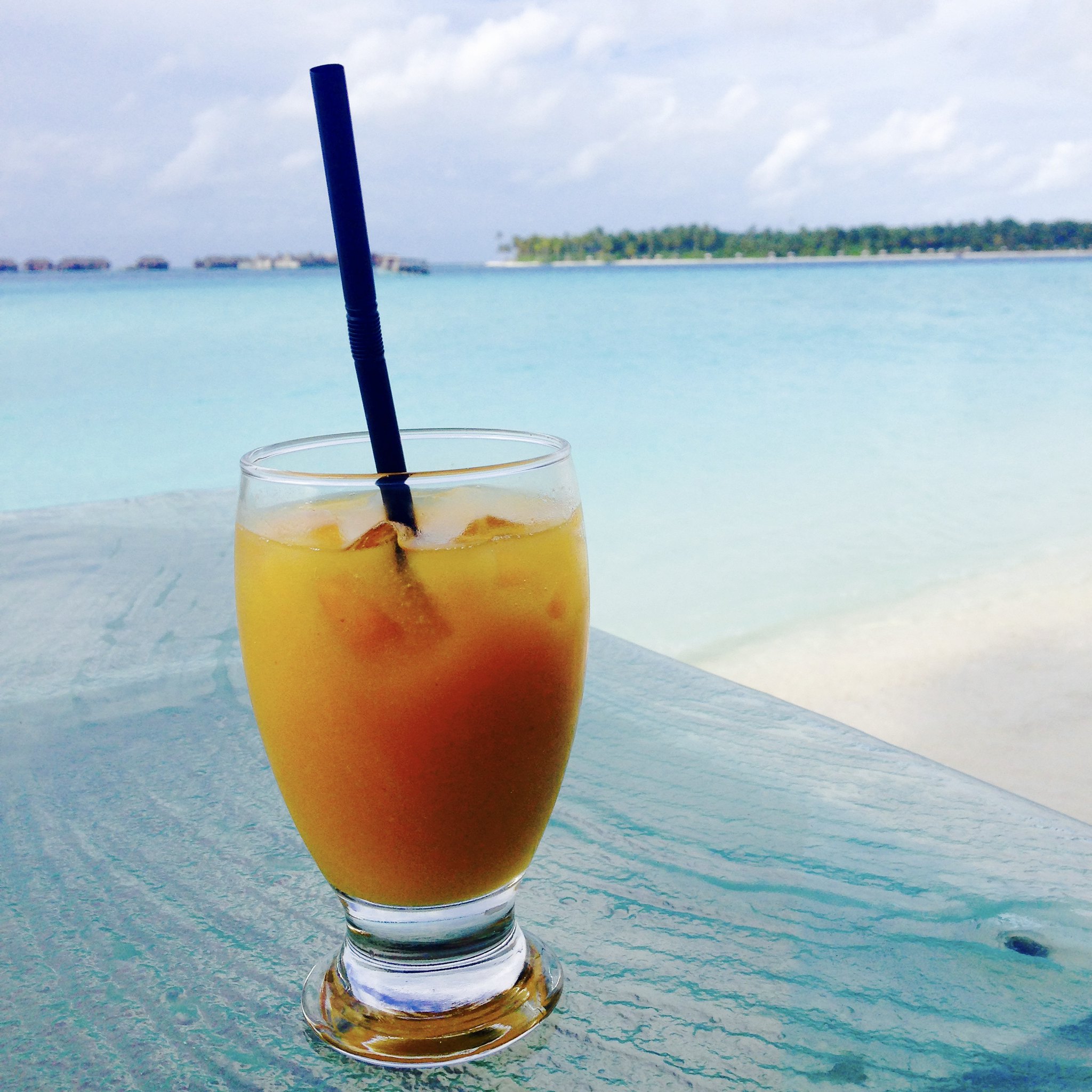 Dining is expensive. I’ve heard of stories of people who basically pack a lot of instant noodles, and cook it in their room to cut costs. That’s always an option. I did, however, dine at the resort when I was there. 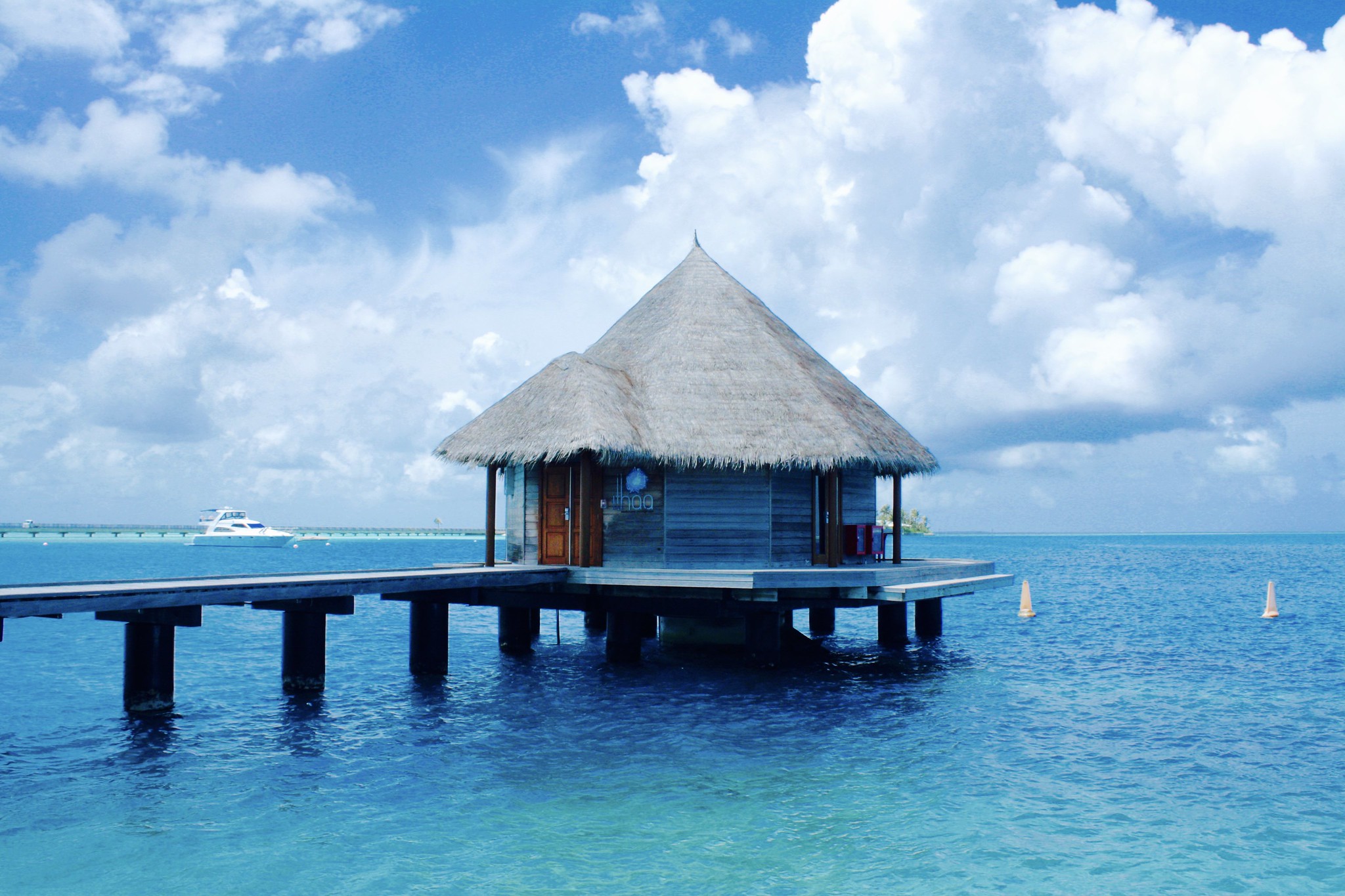 I really wanted to try their Ithaa Undersea restaurant, since it’s a unique feature. To cut costs, I went with their lunch service, which was a prix fixe at ~200 USD. It was pretty cool, and the food was pretty decent (I guess you are paying for the atmosphere), but as a lunch service, it was definitely not romantic or anything. There was a family with some unruly kids, and the parental units didn’t feel compelled to rein in their wildlings. The servers actually had to tactfully escort the kids back to their table, and there was only temporary respite for the other diners, as the wildlings were back to their disruptive behavior (one of them tried to jump on me). 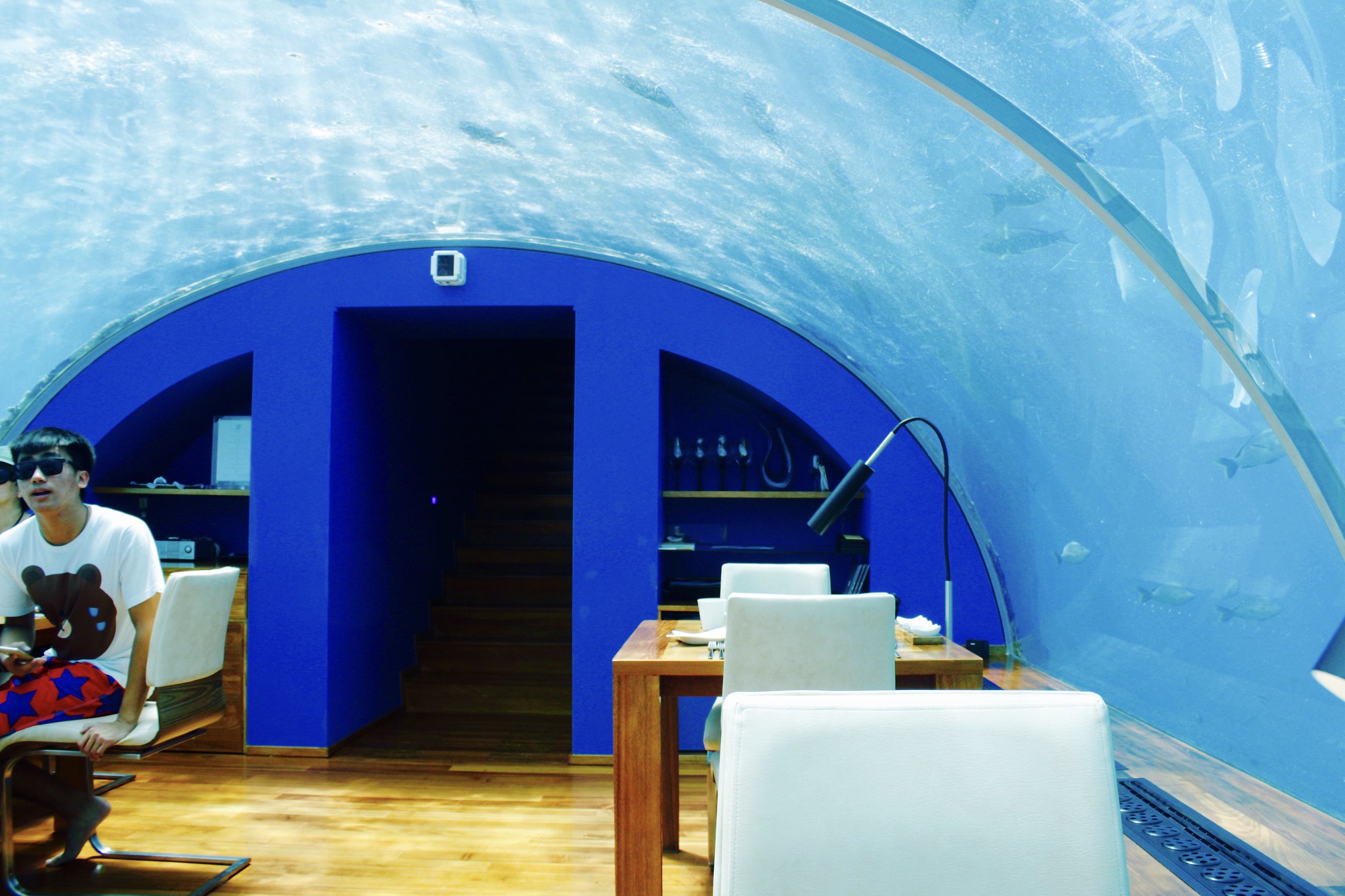 For my two dinners, I ate at the Rangali Bar, which is one of the more affordable options. Even then, a Wagyu burger with a soda set me back ~50 USD after tips. The Chicken Tikka that I had the next evening cost about the same price. In short, if you are going to pay for food, there’s really no escape from paying ~50 per entree. 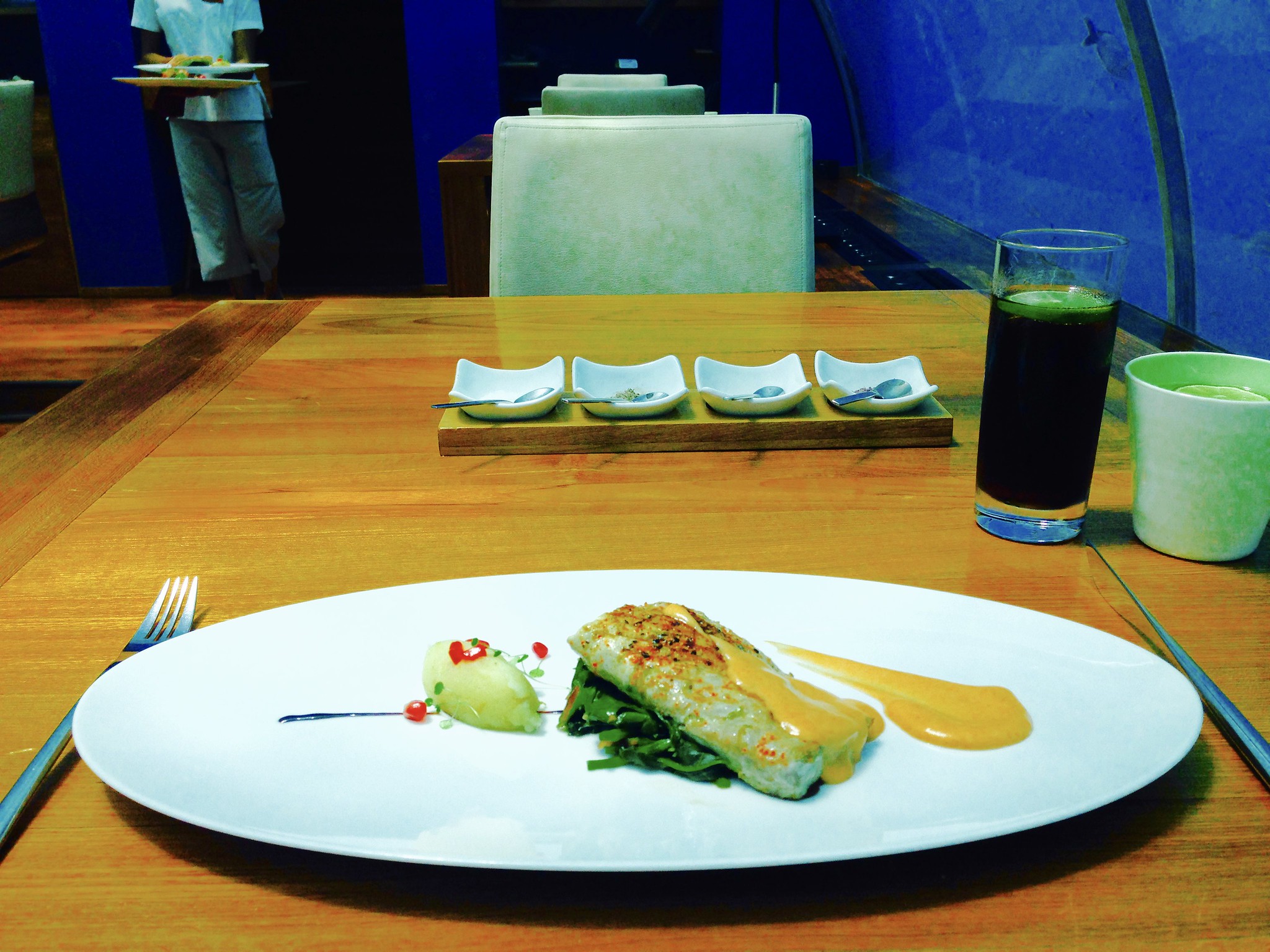 Many people do cruises or diving, but I was on a very short trip, so I just wanted to swim/lounge around. 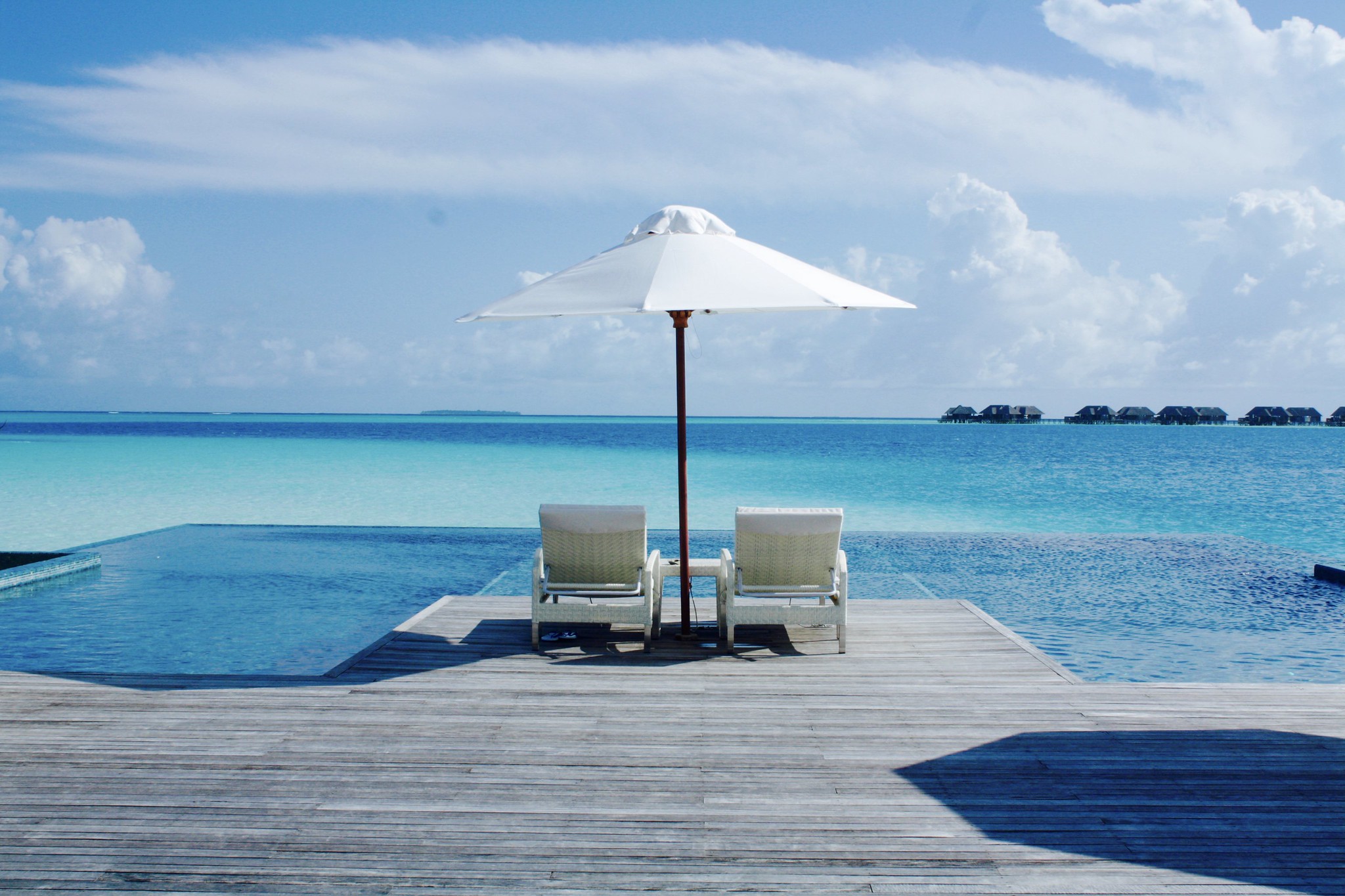 Snorkeling equipment rental is available for free at the dive shop. I checked out a set on my second day there, and went snorkeling around the house reef. It wasn’t spectacular, but it was a very calming experience. 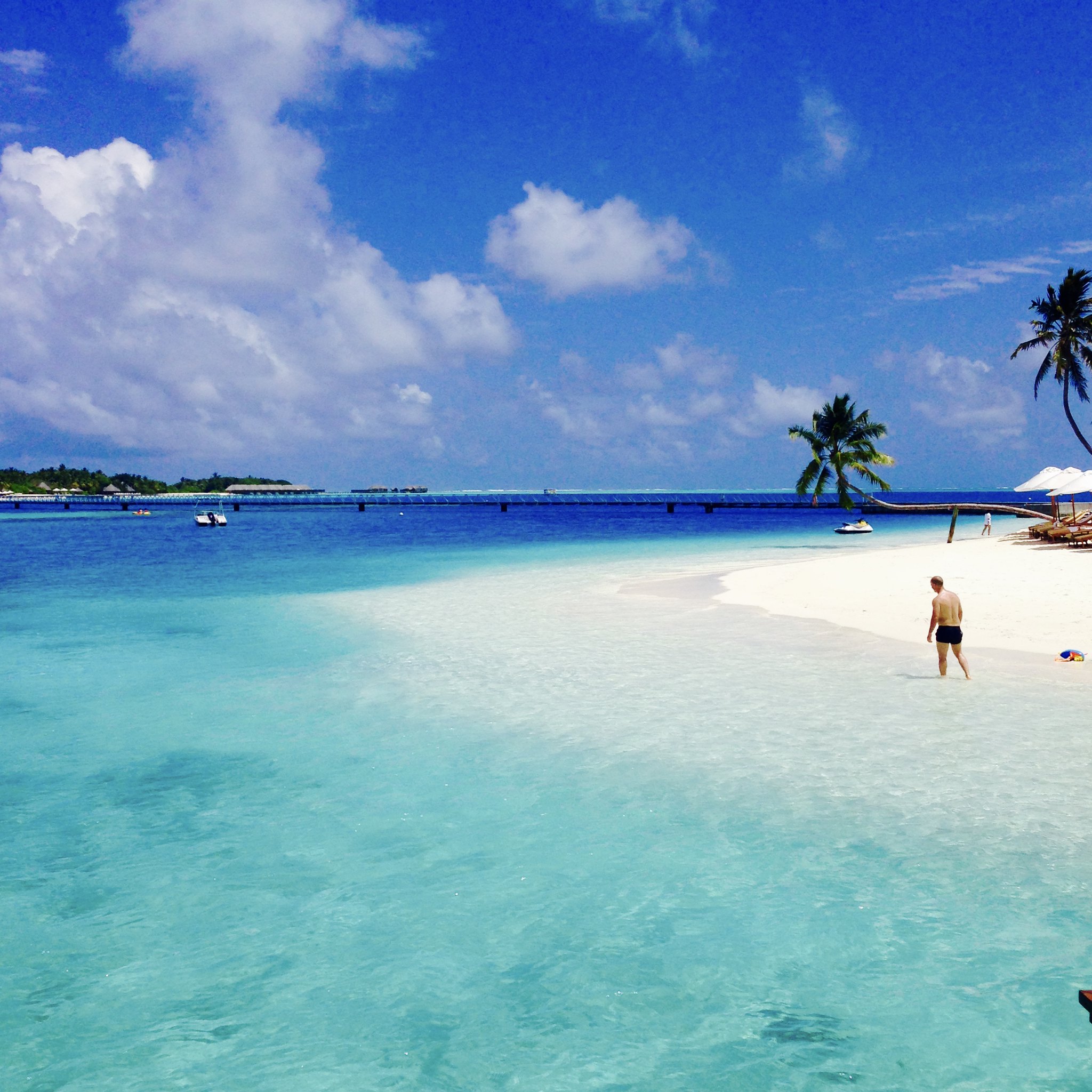 I spent most of my time swimming. I swam at the sea in front of my beach villa, and on my last day there, I actually swam between the islands. I also spent my time lounging. My personal favorite was the adult-only infinity pool on the island with the overwater villas.

This is probably the defining factor for the Conrad Maldives – top-notch service. Everything was perfect. One day, I was at the infinity pool. I spotted a pair of flip flops under one of the lounge chairs. An attendant asked for my room number before bringing some towels. Some 30 mins after I returned to my room, my personal concierge asked if I left my flip flops at infinity pool. 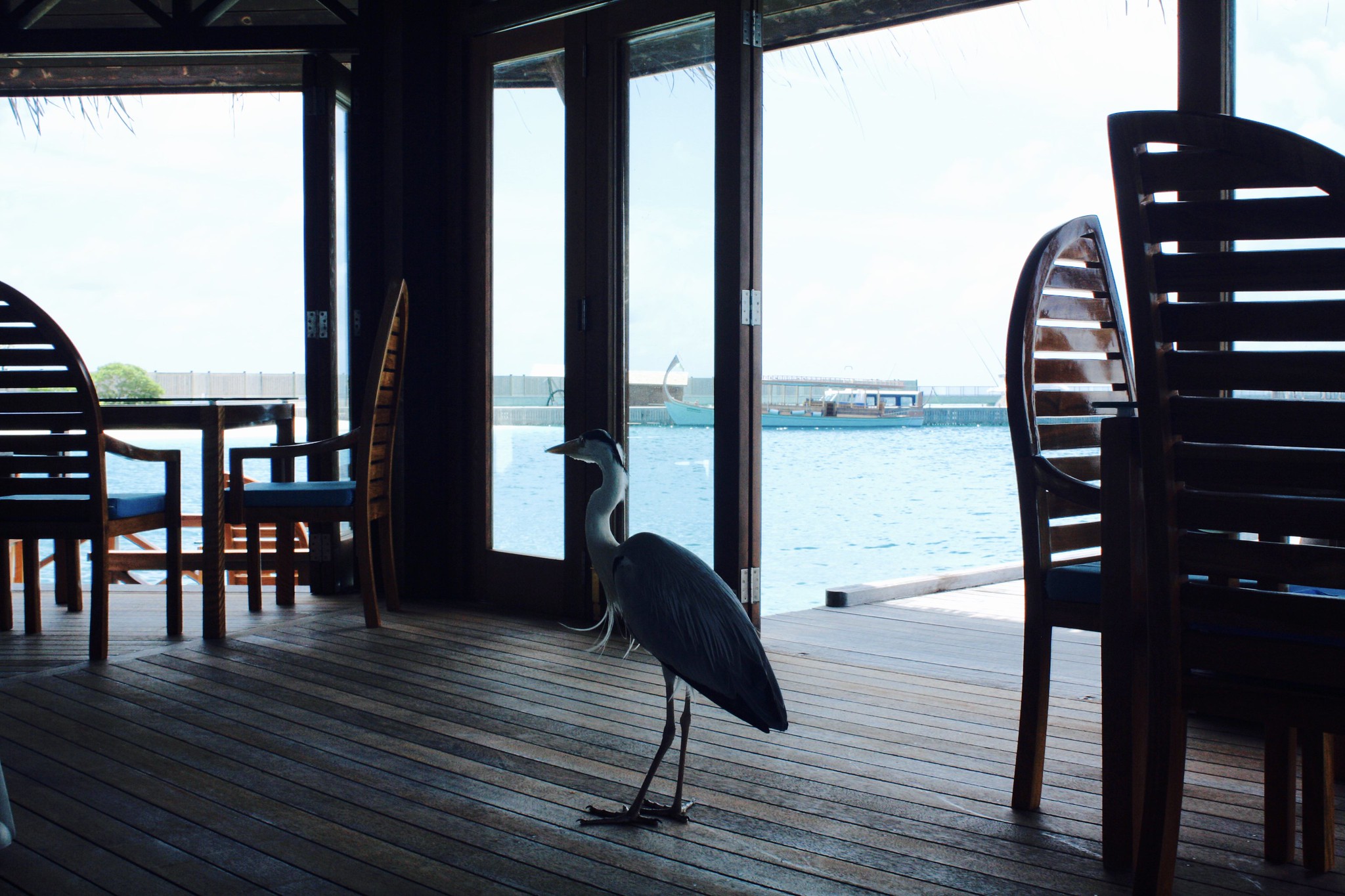 I never quite got the hype of the Maldives, but I must say, this was one of the most relaxing vacations I’ve ever had. Just walking around the various sandy paths between the islands and swimming and lounging in the clear blue sea. It was an incredibly calming experience, which was topped off by impeccable service. I actually found myself researching other options for Maldives vacations right after returning from this trip!

Well, I didn’t get this vacation for free, but I did do it for ~1000 USD, which is still pricey for a weekend.

I saved about 1100 USD on this trip with miles and points. This trip probably can be done with about 700 USD (seaplanes and budget airlines), if you’re willing to eat instant noodles for your trip.