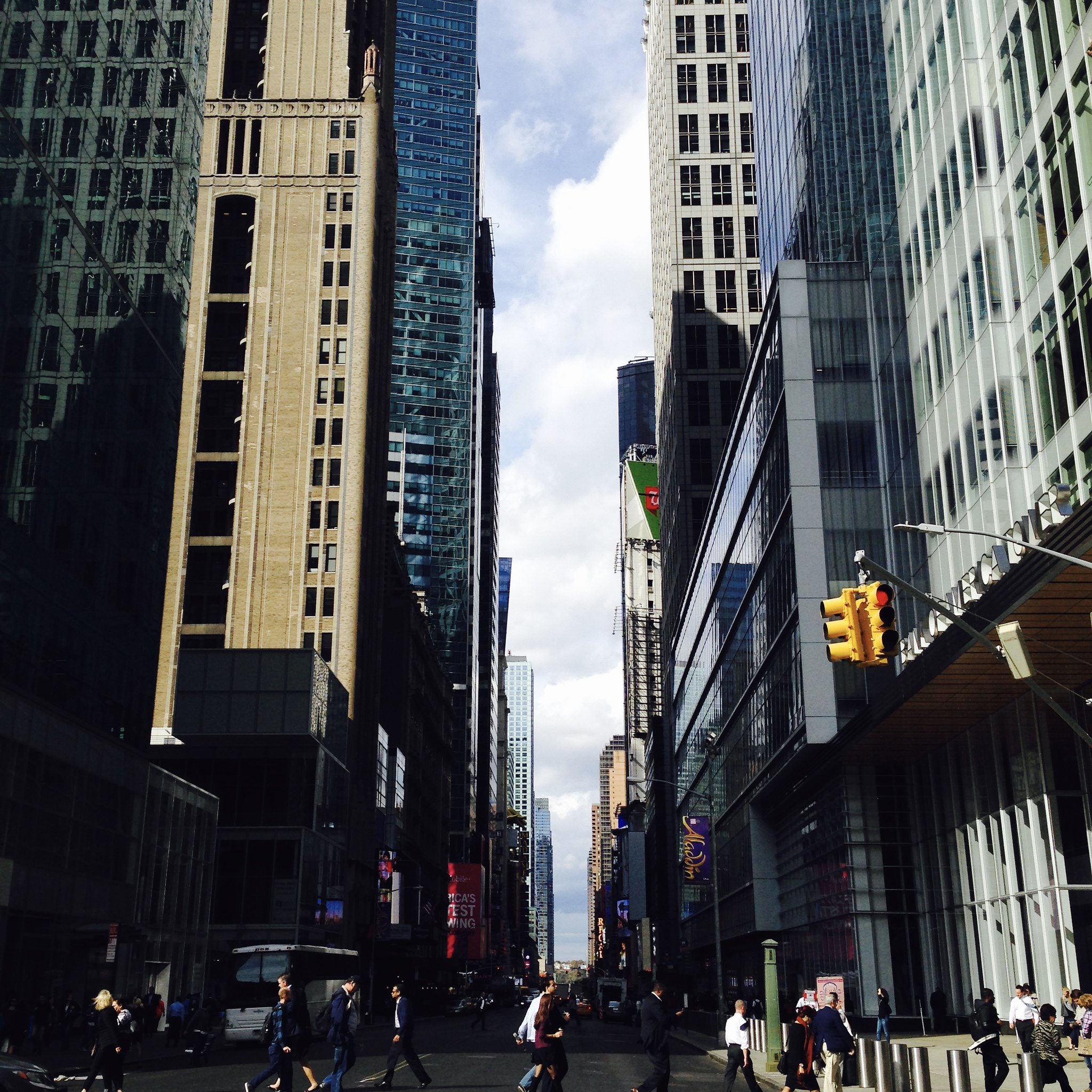 I decided on an unplanned trip to New York City, because of a fare sale by JetBlue (damn you, JetBlue!), which sold tickets flying on 31 Oct for $31, including my ~2500 mile trip from NYC to Seattle.

I took a red-eye on Alaska, and arrived in JFK around 7 am. In a prior trip, I took the Airport Shuttle, but this time, I used the public transport system. The AirTran and the New York subway system set me back by $8.75 ($5 for AirTran, $2.75 for subway fare, $1 for metro-card). It took me an hour to get into the city. 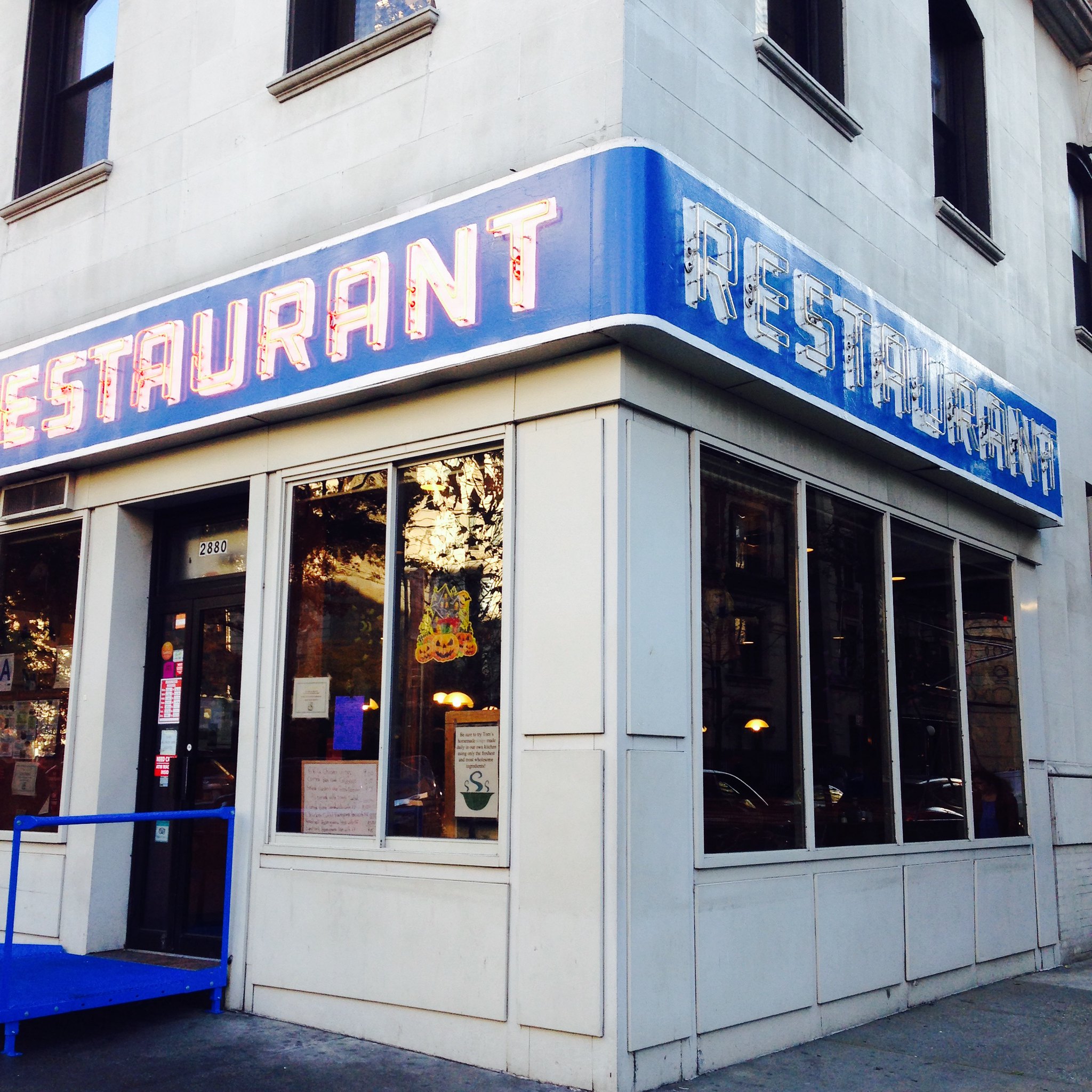 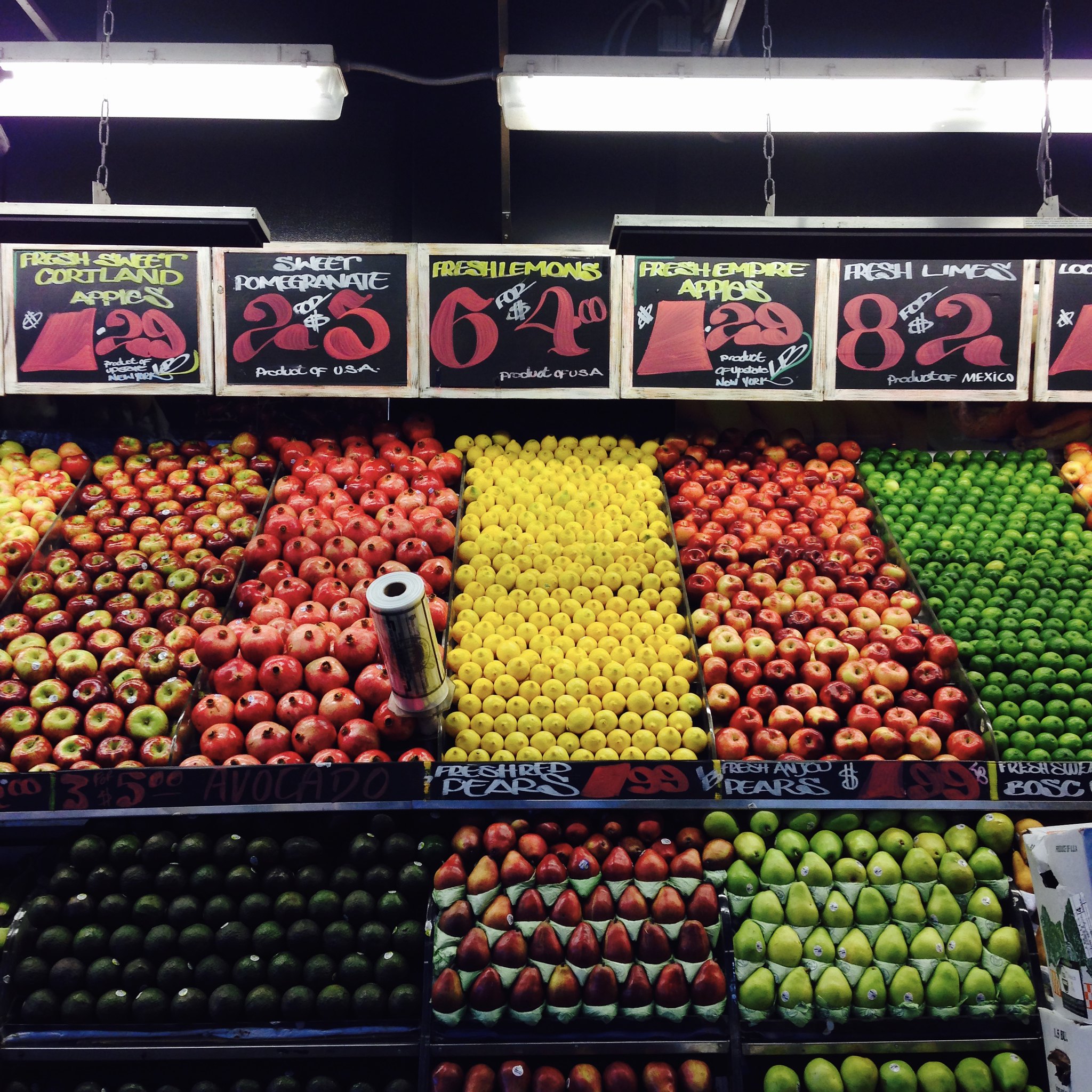 After dropping my bags at the Holiday Inn Express Times Square, and grabbing a quick complimentary breakfast at the hotel, I headed uptown. I am a huge Seinfeld fan, and one of the things I wanted to check out, was Tom’s Restaurant, the facade for Monk’s Diner on Seinfeld. Google maps screwed me over a little, and after taking the 3 train ($2.75) from Port Authority/42nd st, and popping out at 96, I walked some 20 streets to get up to Tom’s Restaurant around ~110st street and Broadway. It is mostly just a facade, but the walk around the neighborhood was really nice. I enjoyed taking in New York street life, its fruit stands, food cards, and the little shops. I took the 1 train back to mid-town to meet my friend at Grand Central, who came in from Peekskill.

I had no real plans, but I did have some work to do, so there’s probably no better place than the iconic New York Public Library. Unfortunately, the Rose Reading Room was under restoration (argh! second time for me!), so we went to the one across from it, and we both worked on our individual projects for an hour or so. 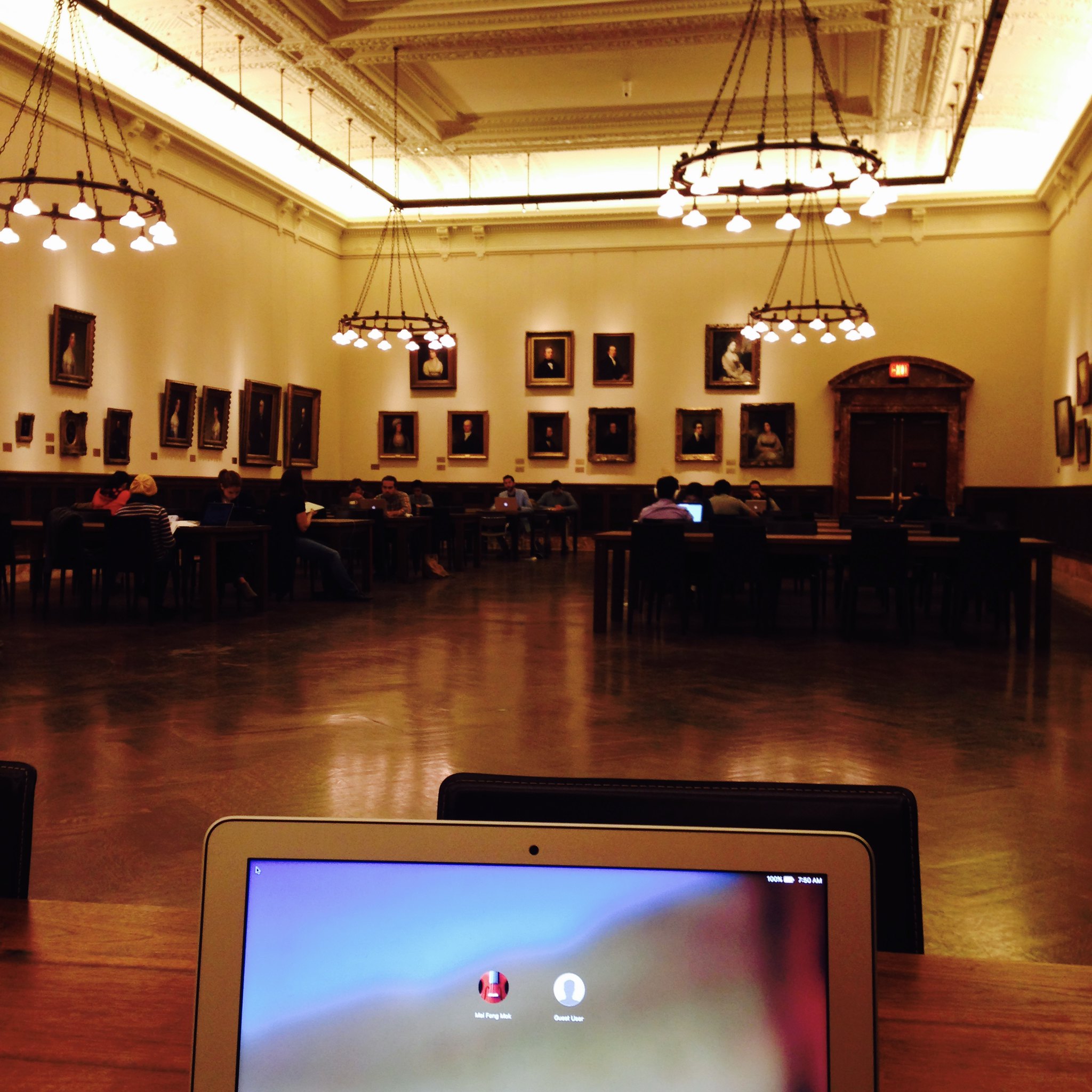 After hearing about all the hype about Shake Shack, I wanted to try it for lunch. The line at the Theater District outlet was longish, though the wait probably just took 20 min. I had the Roadhouse Single, and Fries (~$10 total), and well, I’d say, it’s not worth it. It was kinda nice to sit at the tables and cars that they have now scattered around Broadway and Times Square, and just soak in the hustle and bustle of New York City though. 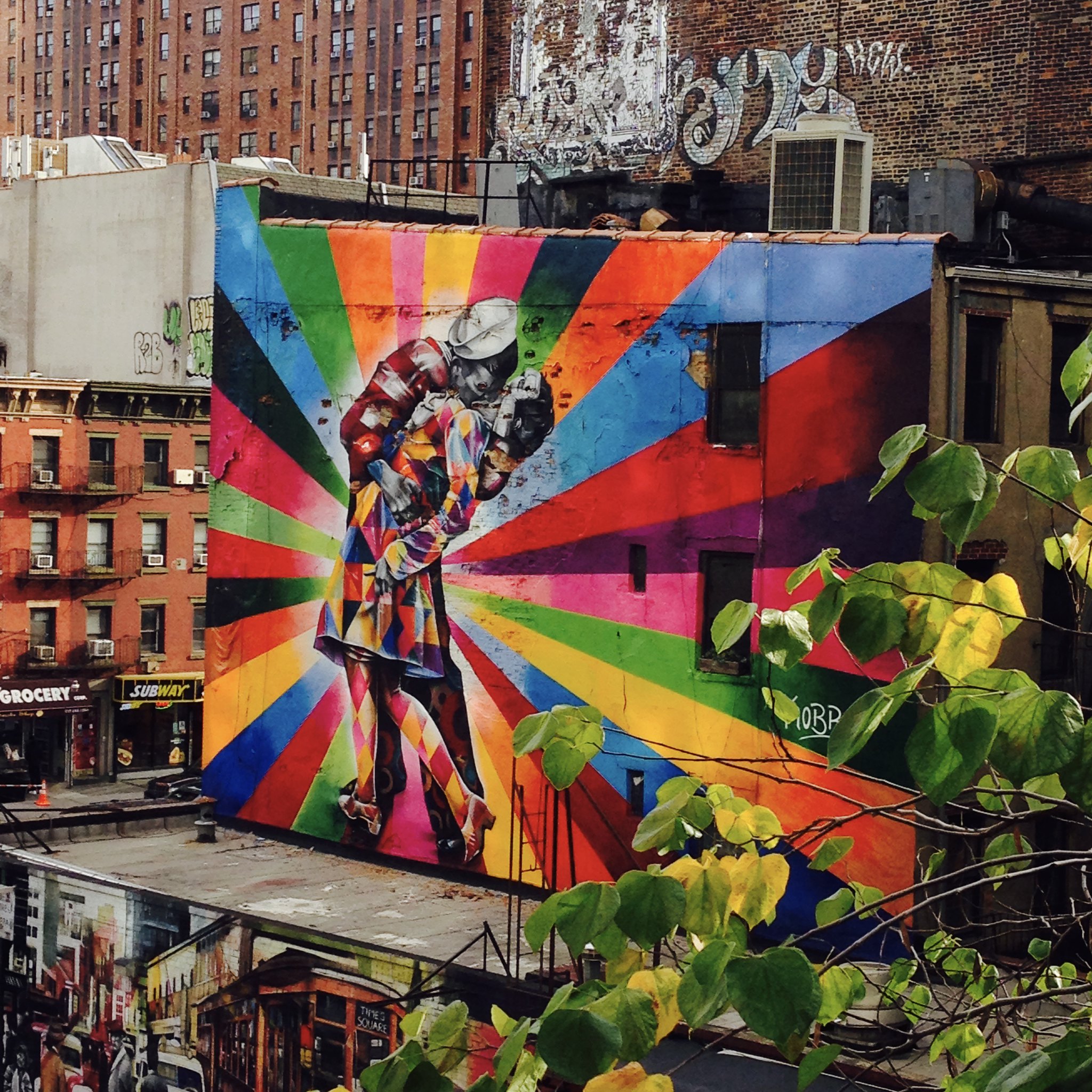 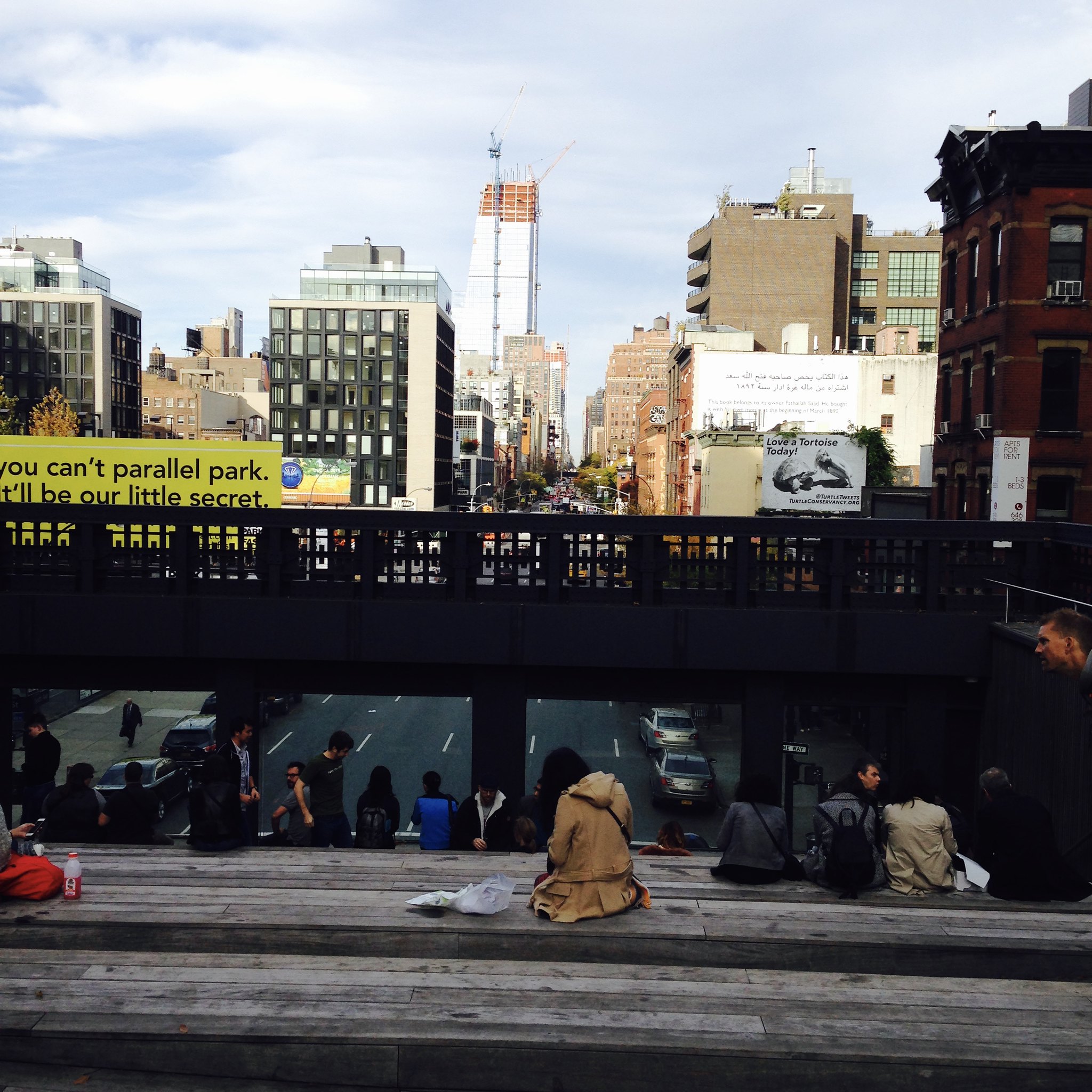 After checking in at the hotel, and a quick nap (I didn’t get much sleep on the red eye), we set off for one end of the High Line, at 11th ave and W 30th st. Fully opened in 2014, it used to be the train tracks. Now it is a pedestrian park that is above street level, and offers an interesting view of New York City. While I wasn’t a huge fan of the greenery, the seating spread out on the High Line sure offers a nice respite, and I really enjoyed the graffiti I saw along the way. Our leisurely stroll took about 1 hr (we stopped to watch traffic on 10th ave, and chat), and we finished it off on the other end, which deposited us at the meatpacking district. 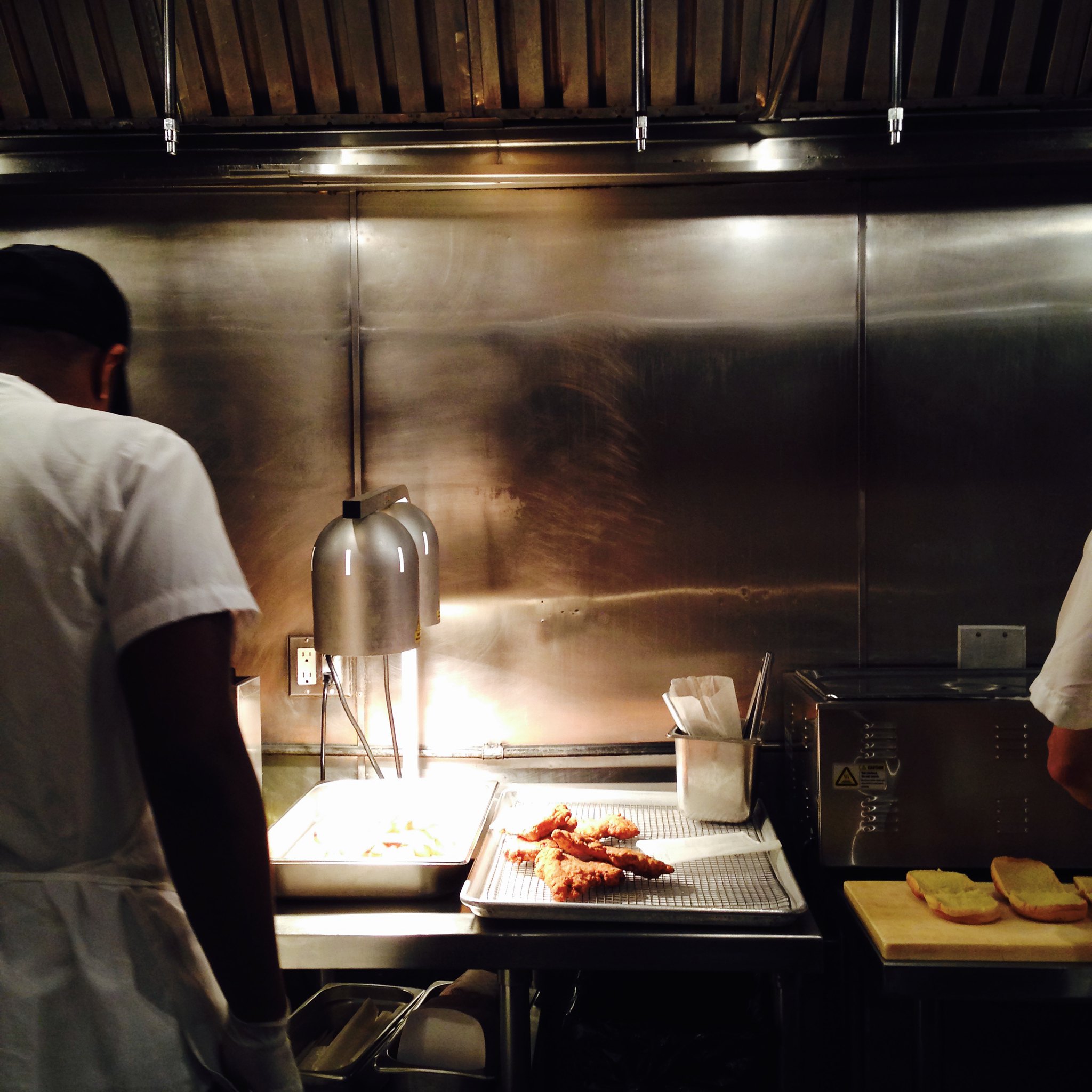 We made our way across Manhattan, from West to East, because I really wanted to eat the Spicy Chicken Sandwich from Fuku, by Momofuku. It was a nice (if somewhat punishing on my feet) walk, as we went by brownstones, and saw a variety of shops, and some ethnic neighborhoods in the walk. It was a crisp fall early evening as well. So no complaints. Fuku is rather small, and easy to miss, so be sure to look at the store numbers if you are trying to locate it. 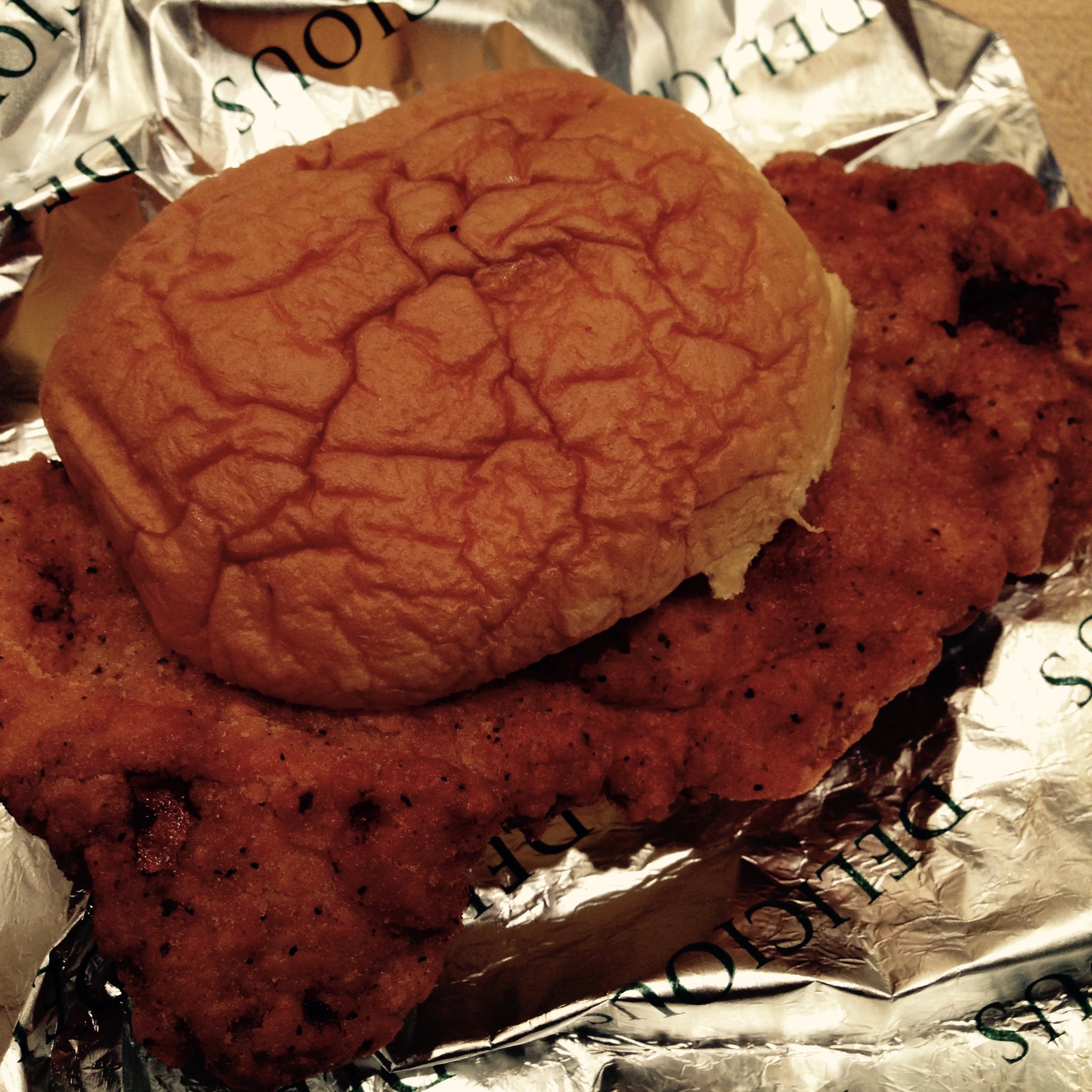 Fuku by Momofuku only sells one thing – spicy fried chicken sandwich. It is really a simple thing done perfectly. We showed up just as they opened for dinner service (6 pm). There are no seats in this shop, just counters for you to stand, and enjoy your sandwich, and five people running this small, efficient operation. The kitchen basically consists of two fryers, and the tender breaded chicken pieces are fried there, along with fries, if you care for some. It was an excellent chicken sandwich ($8), and along with the fries ($3), this simple dinner won’t break the bank. I probably won’t sell my first-born, or take a special trip down here if I’m in NYC, but I’d still recommend it if you’re in the area. 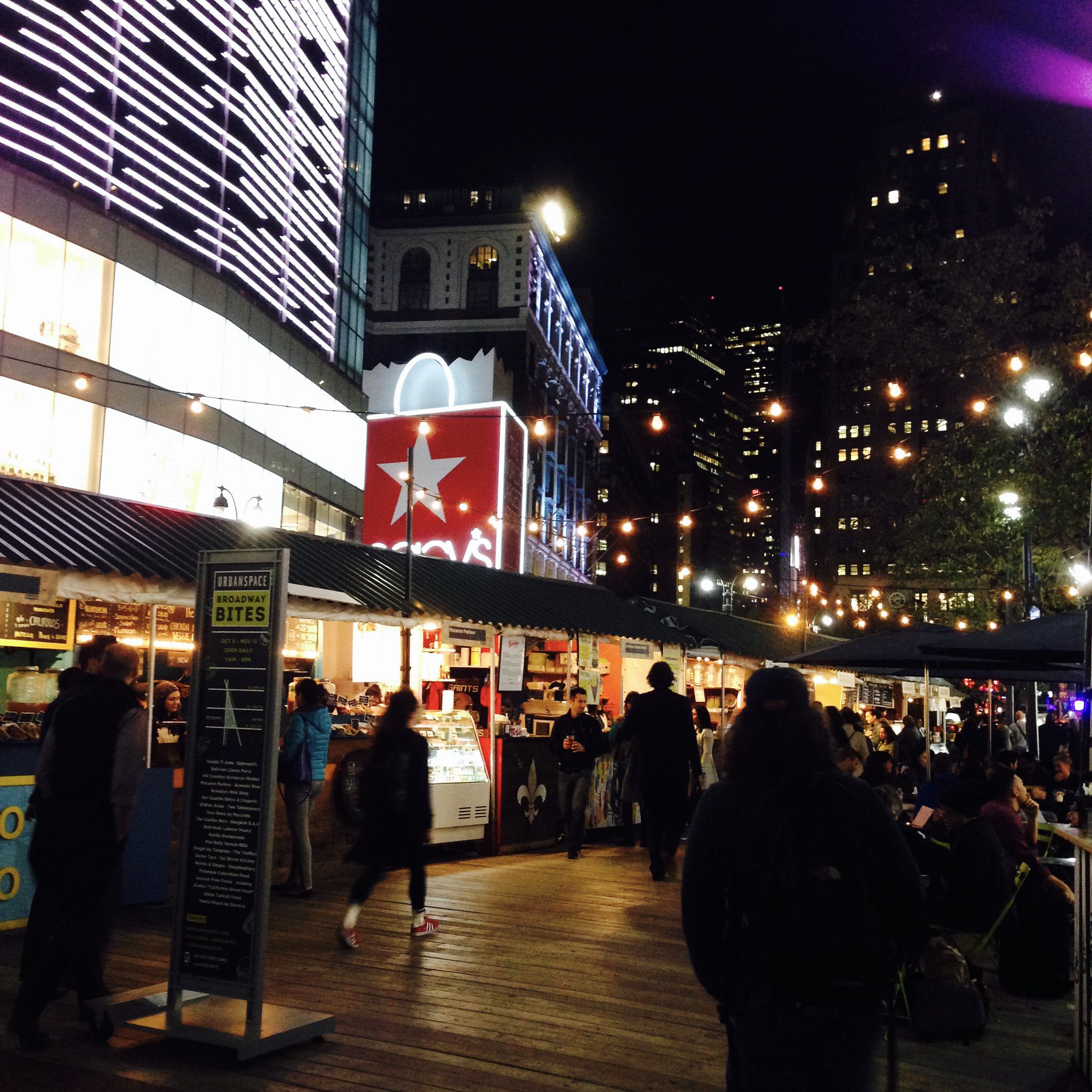 Following dinner, we made the journey back to our hotel. My friend wanted to show me Times Square at night, so we headed in that direction. There are some nice developments (for pedestrians, in any case) in NYC around the main tourist district at the Theater District, around Broadway Ave between 35-45th streets. They reduced lanes for vehicular traffic, and in its place, they placed many tables and chairs for pedestrians to take a break, get a coffee, or eat their meals from the different food trucks. I am not sure if this is permanent, but around 35th st and Broadway Ave, they also have Bites on Broadway, where they have little food stands, serving quite a wide array of cuisines, and you can sit around there and eat your food.

After taking in some of the night scenes in NYC, we retired for the night. I passed out from the lack of sleep. 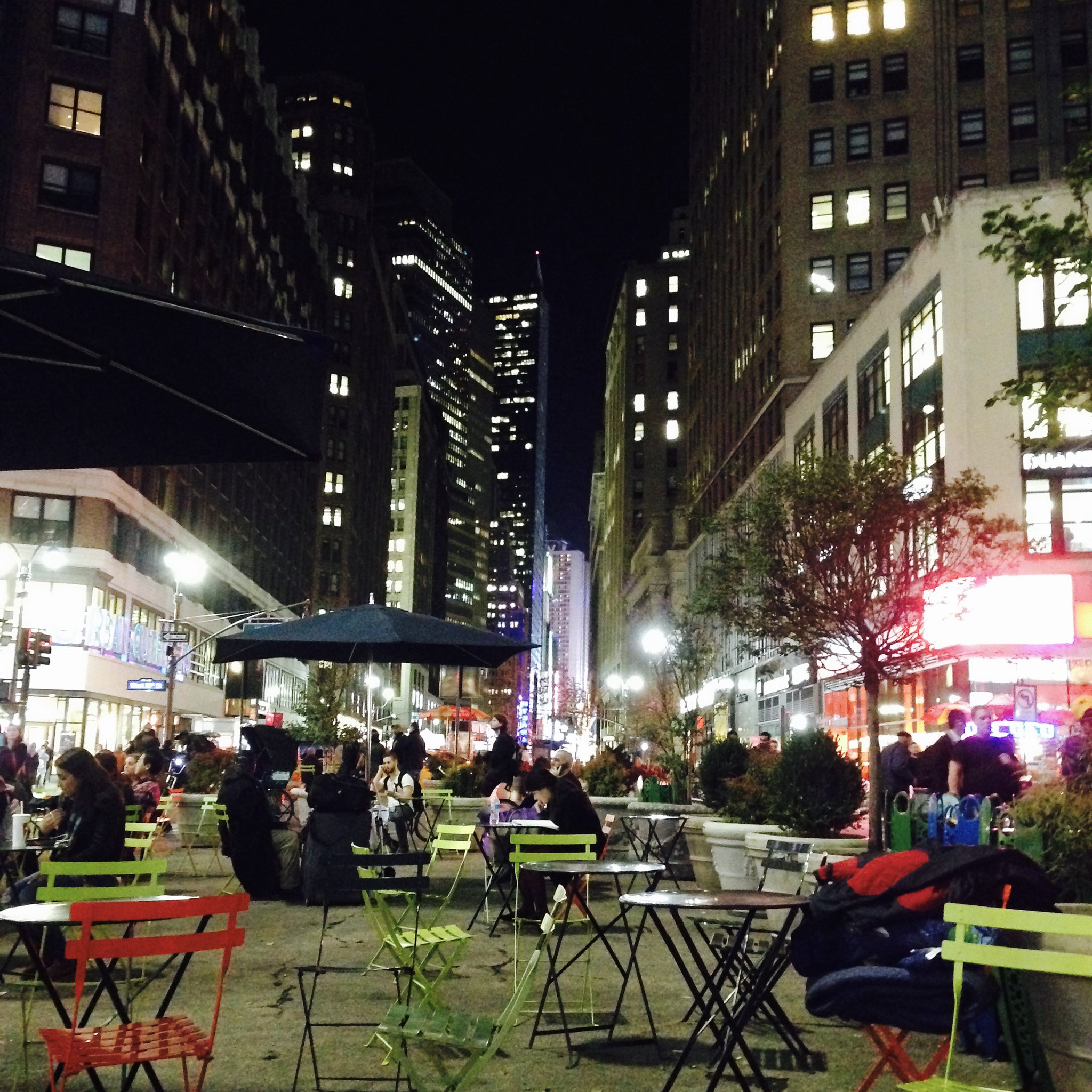