The Ballard Locks, also known as the Hiram Chittenden Locks, includes a garden, and is a series of canal locks. It somehow manages boats/ships trying to enter from the Puget Sound into Lake Union. They have some explanation as to why it’s the case, but eh, I was too lazy to take notes. 😛 Go read it yourself! It also connects pedestrians from Ballard to Queen Anne, that’s across the lake.

Salmon is not the only sea life available. We also saw a pretty big seal, which was quite a tease for those of us trying to take a shot. Just when you thought you knew where it was headed, it’ll appear in another spot, and before you can take a shot, it’ll be gone. We also saw red jellyfish swimming around. The Ballard Locks is definitely a great activity for a sunny day.

After all that, consider eating around there. We ate at Lockspot, which was pretty decent. I’m not a huge fan of their clam chowder, which was saltier than what I am used to, but the fish and chips were decent. I had the salmon version of it, which was very nice and moist.

The Alaska Titan waiting for the lock to open 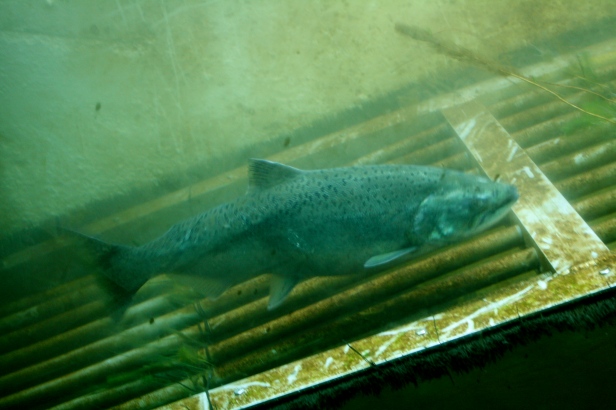