We would have been ok either way – staying in Oakland overnight, or simply day-tripping from Seattle for a day baseball game, but the stars aligned perfectly. This also gave me the opportunity to return to Seattle for dinner with my friends. The truth is, we couldn’t have planned the day better. The Angels signed Tim Lincecum after his showcase, and he was slotted to be the starter for this game. As a Giants pitcher for all of his career to date, this will be his first start in any other MLB uniform. It’s always interesting to watch the Freak pitch – the guy has some crazy mechanics to generate sufficient torque to pitch.

Because it was a one-pm game, we didn’t feel compelled to go into Oakland too early, so we booked the 10.20 flight, which arrives in Oakland at 12.30 ish, giving us plenty of time to make it to the Coliseum. 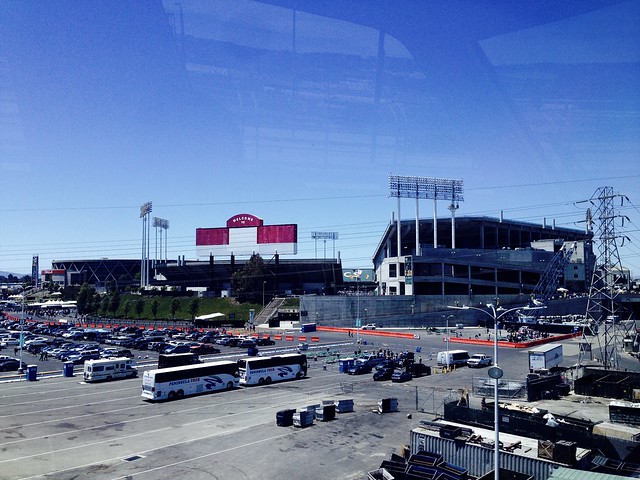 Getting there and back:

Pulling into the O.Co Coliseum from the airport sky shuttle, I can see why people hate the Coliseum. I have no strong feelings about it, but it is a really run-down park. When I pointed it out to my boyfriend, he was in disbelief, and thought I was making stuff up again. Turns out I was right – the run-down stadium is indeed the Coliseum. The stadium itself is also rather run down. The barricades are made of that green plastic that you are more likely to see at older college baseball stadiums. This stadium really reminds me of U Hawaii baseball stadium, the one and only college baseball game I ever attended.

We started our tour from the top (Level 3oo), which offered great views of the stadium. If you want to do panorama shots of the stadium, do it here. Most of the upper level seats were not for sale at this point, with only 3 sections for sale. These tickets are affordable (~$18) and comes with $6 credit on a weekend game.

You can peep into half of the Level 200 seats, but otherwise, the rest are closed-access club seats. The view ain’t too bad, and if you need some shade from the sun shining down, these seats will be great. 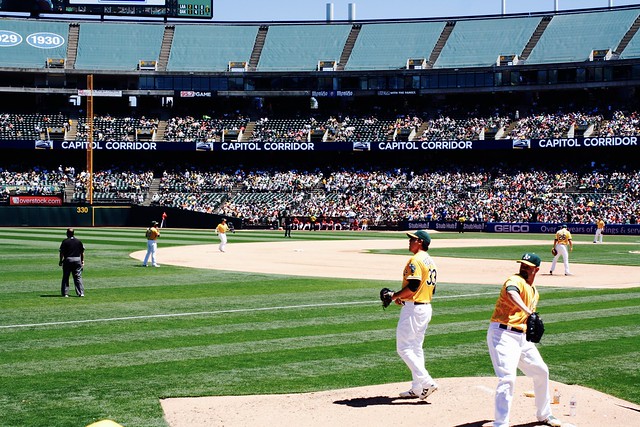 We had seats at Level 100, behind the As bullpen. The bullpens are by the foul lines, and the mound is really just right there. If you sit around section 127, you will be right behind the As bullpen. If you are in the business for heckling, you’d be in perfect heckling distance. Or signatures. Whatever floats your boat.

They do have some interesting options as well. Price-wise, it’s pretty average for ballpark food. They have a nice looking deli, serving freshly carved sandwiches, and I thought their hamburger poppers ($8) looked really interested. It was a shame that by the time I decided I wanted to try them, the stand was closed by the sixth inning. I wound up with cheeseburger and fries ($10), which was pretty good value and tasty as well.

The O.Co Coliseum is probably the most rundown stadium we went to so far. I actually enjoyed it nevertheless. The atmosphere was great – the game was well-attended and the fans are super friendly, and I got to see quite an offensive display by the Angels. Oh, and I specifically picked up Tim Lincecum for this game, and he only gave up 1 ER, and got me a W. 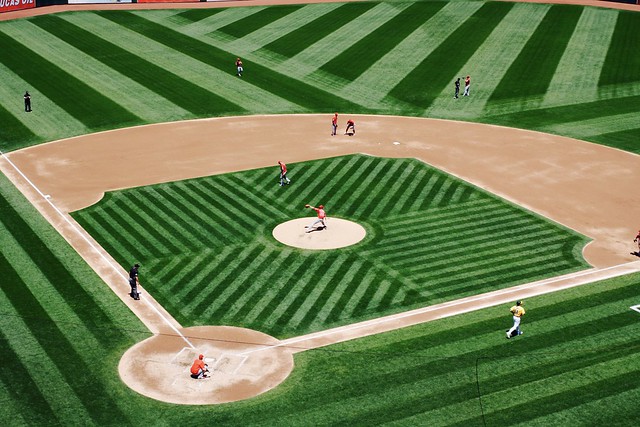