We were in Phoenix earlier this year for Spring Training, but decided to make a second visit this time as part of our US MLB Ballpark tour. After our stressful car rental experience, we booked into the Hyatt Regency Phoenix, which is a couple of light rail stops (~30 min factoring in waiting time and transfers, $2 per ride) from Phoenix Sky Harbor Airport, and a short walk to Chase Field.

I shall come out and state the obvious – Phoenix is HOT in June. I was born and raised in Singapore, where 90+ temperatures are the norm, but man, this was really on the edge of unbearable. We had plans to explore downtown Phoenix, but we ducked into a Carl’s Junior at Talking Stick Resort Arena across the street from our hotel. 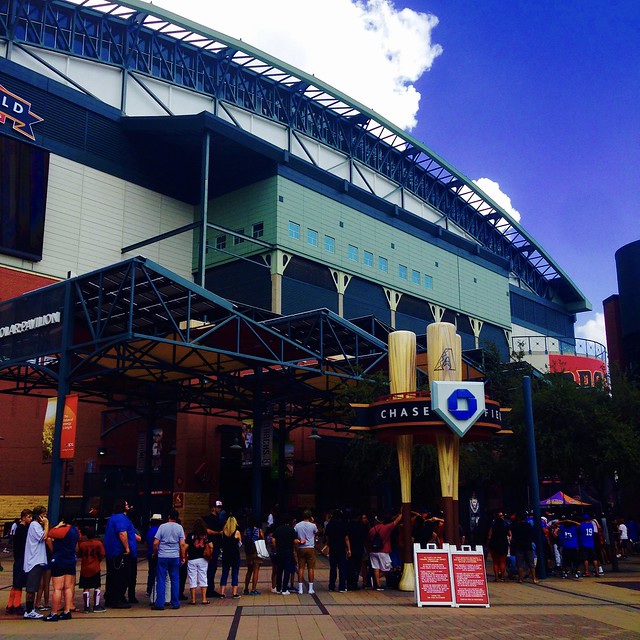 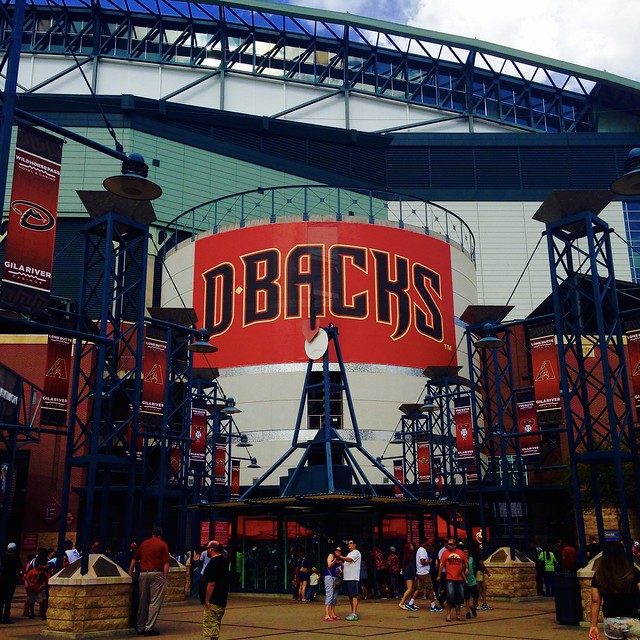 It was Native American Day at Chase Field, with a hat giveaway (the hat is really pretty!), so we decided to head over early, to check out Chase Field and check out batting practice. The lines waiting to get in were long!!! I have a couple of fantasy players in the Arizona D-backs vs. Miami Marlins game, so I didn’t mind checking out some of the guys on my team. 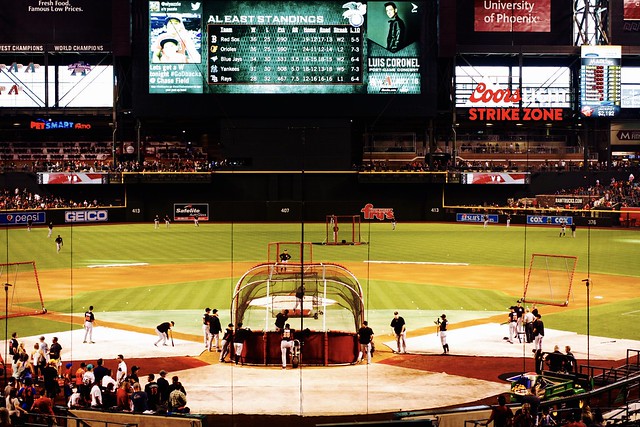 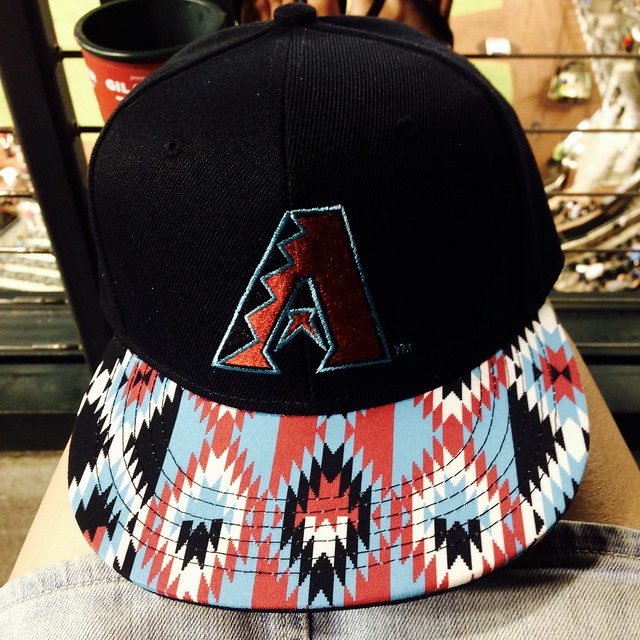 First off, Chase Field is pretty cool. Like Safeco, it can open or close, depending on the weather. It was REALLY hot outside, so it was closed, and they had turned up to the A/C. Inside the stadium itself, it was a nice, cool, 80 degrees. 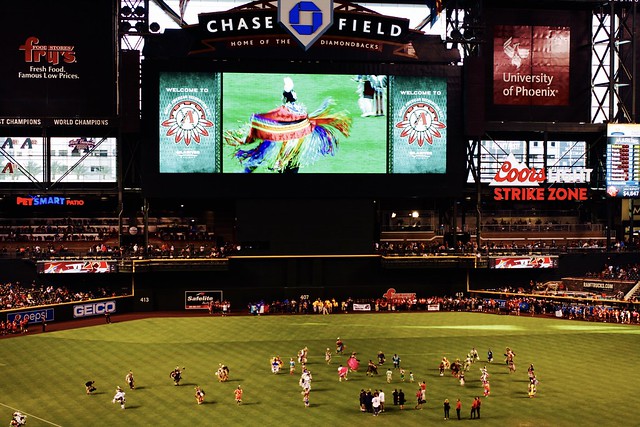 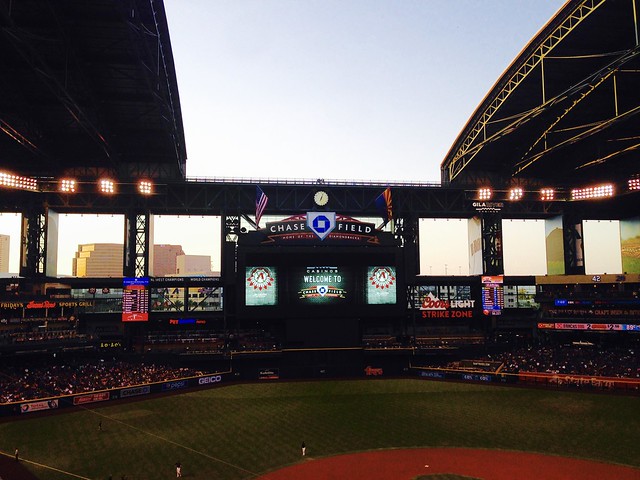 They are really cheap relative to many other ballparks. Their club level seats with an all-you-can-eat buffet is $45 even for weekend games. Their home plate seats are available for ~$95, which is great value, considering that these run around ~$300 at other ballparks. They don’t come with special perks like complimentary dining, but if you just wanted to sit behind home plate, this would be a good ballpark to do it.

We got front row seats at the 300 level for $40 for 2 tickets. It offered a great view of the game, though I did have to lean over from time to time because of the railing.

They have very interesting options. They have gourmet burgers featured in Guy Fieri’s Diners, Drive-ins and Dives. They also had some other eclectic options like Churro Dog, which is donut patties with a churro wrapped inside, topped off with ice cream. Sugar bomb!!!

But they are most famous for the D-Bat, which is an 18 inch corn dog stuffed with cheese and jalapeños, set on a bed of chips. It’s not cheap at $30, but I guess if you are attending the game with a group of friends who really love corn dogs, it’s a good sharing food. 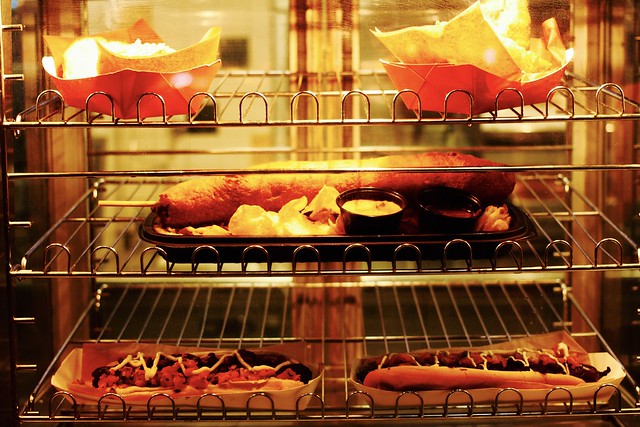 I personally went with a Sonoran dog, which is a foot-long hotdog, wrapped in bacon ($11), topped with pico de gallo and beans. It was pretty ok. I wouldn’t rave about it. 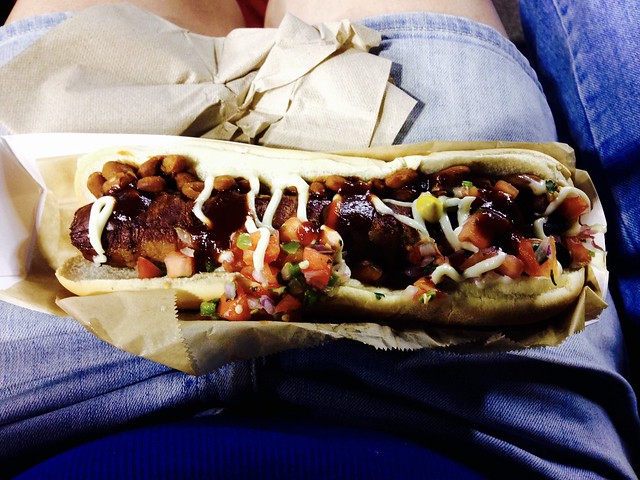 One note about their souvenir soda cup ($7.50). We were surprised to find out that they do not offer free refills like other ballparks. They only offer $2 refills to their season ticket holders. They do have a bunch of $2.50 for 2 dogs, $2 sodas, and $2 popcorns, but these are limited in supply, and involve standing in line while waiting for fresh batches to be made.

The more interesting food options are one the first level. The third level just has rather standard ballpark fare. 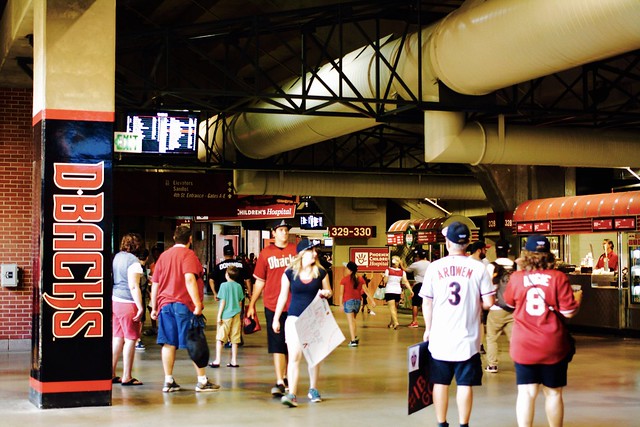 This is probably one of the few ballparks where the attendants take their job rather seriously. We were standing along the concourse to take some photos, and were constantly being chased away by the attendants. This was true even in the late innings. This is not a ballpark that would be friendly for self-upgrading.

Chase Field is pretty enjoyable. The highlight of the game? I got to see Ichiro get his #2974 MLB hit. He’s now been relegated to the role of pinch-hitter, but I’m still rooting for him to get to #3000. 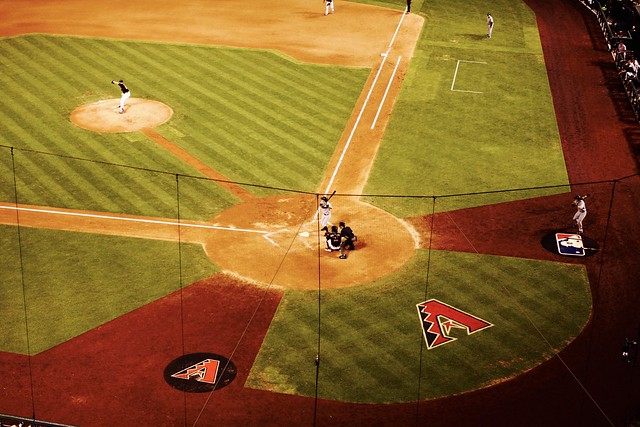