Taking advantage of the Delta Award sale, I redeemed 10,000 Delta points for a same-day round-trip ticket to San Francisco. I had to plan this quite well, as my main goal was to check out AT&T Ball Park, and so, I had to ensure that I flew in on a day when the Giants were playing a day game at home. The stars aligned for today. 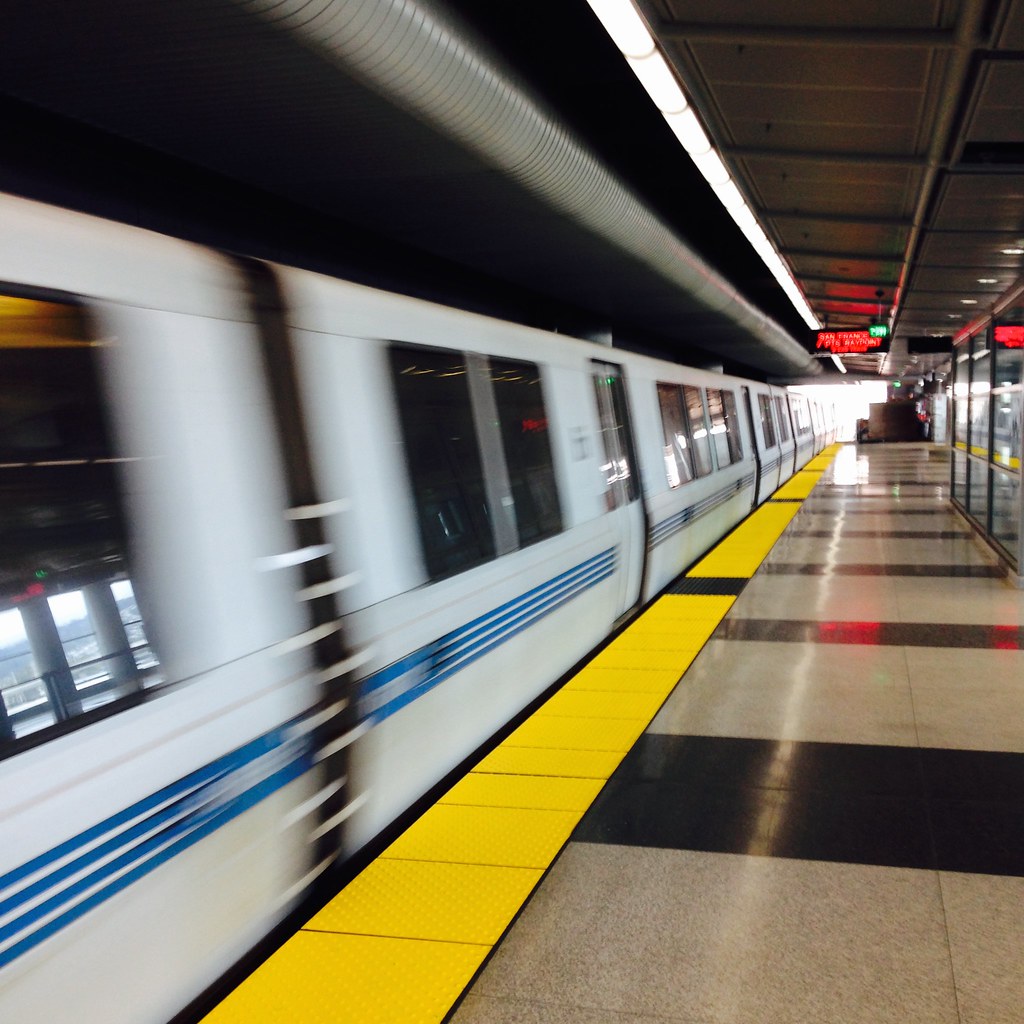 Getting to downtown San Francisco

Getting from SFO airport to downtown is easy. I took the free AirTran to the BART, which sells tickets at the station, and bought a ticket with my Citi credit card to cash in on the 3X transport bonus to Embarcadero ($8.65 – one-way, a fare chart is by the side of ticket booths), as I planned on eating lunch near there before making my way to the game.

Just a small note – you might want to get round trip tickets if you know your plans in advance. I had a lot of trouble locating a machine that took credit cards when I was buying my ticket back from the Montgomery Street Station. I had to try about 7 machines before I got one that took credit cards. The rest took debit/ATM cards. Weird. You do not get a discount for getting round trip tickets. 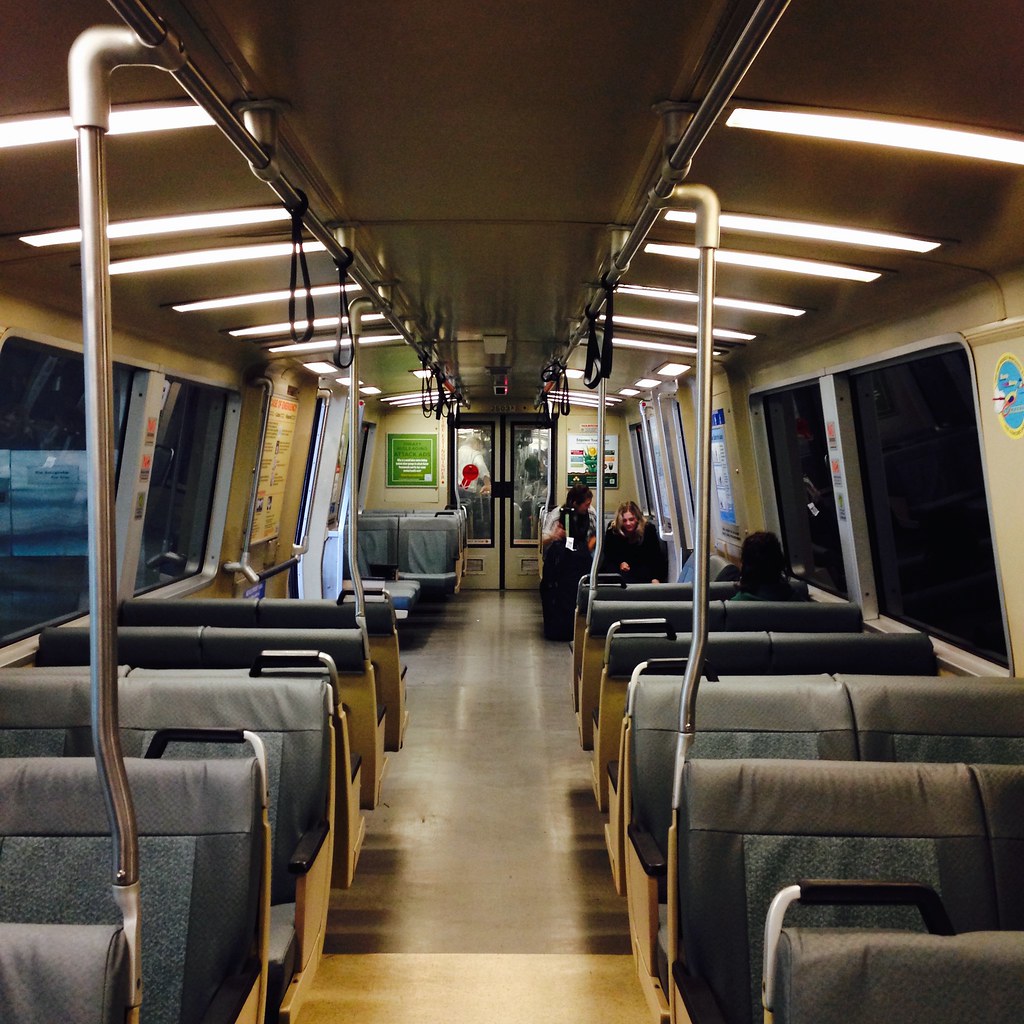 The BART trains are rather oldish, but comfortable. My tushy appreciates the padded chairs! The train to/from the airport runs every 15-20 min, and the journey takes about 30 mins. The signs should be fairly self-explanatory, and the driver makes announcements at every station.

I was trying to eat lunch at Rubio’s, which was featured on Business Insider, but guess what? The Embarcadero location is closed on Sundays. Grr!!! It was nice to check out the Ferry Terminal building, and the buildings on Market Street, nevertheless. After striking out on my lunch plans, I simply walked along the waterfront to AT&T park. It was a pretty nice walk, where you see a mixture of older buildings, along with those modern tall glass buildings. I would say it was a 15-20 min leisurely stroll. 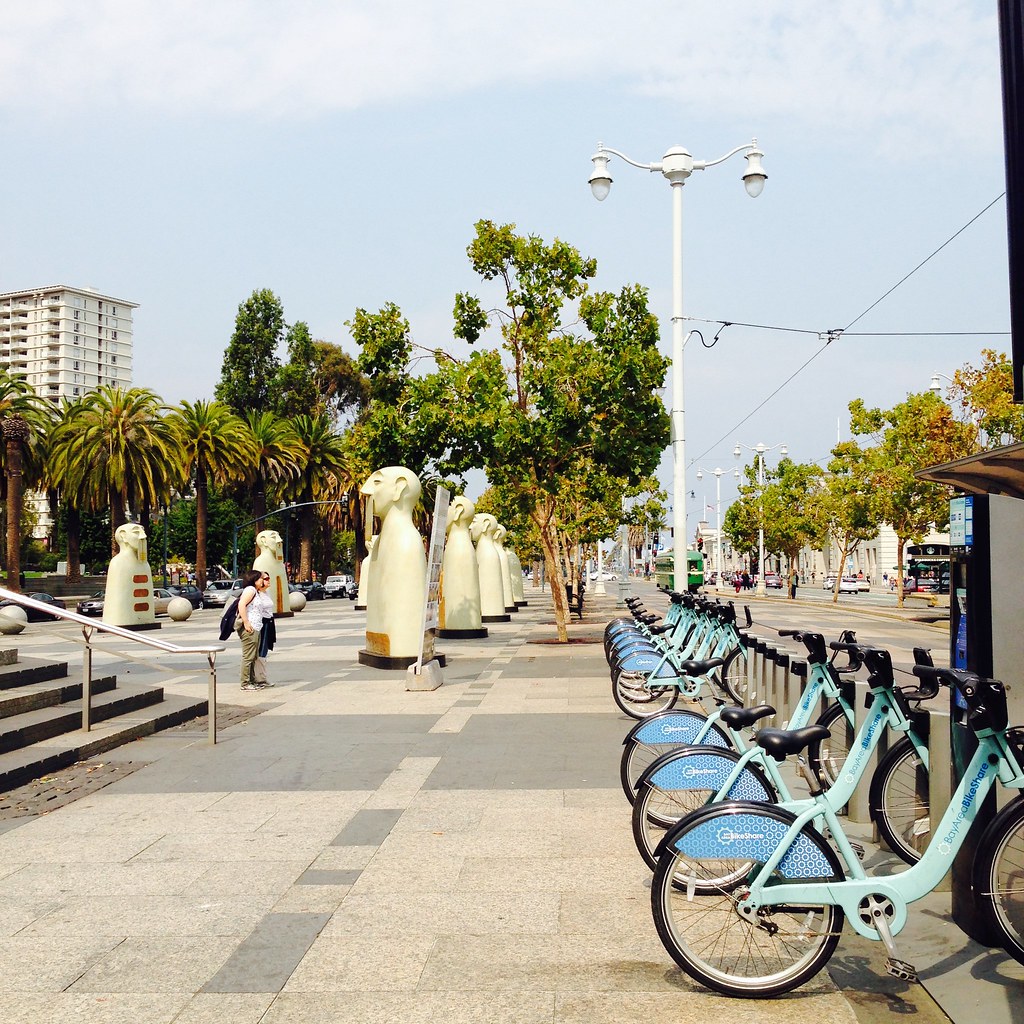 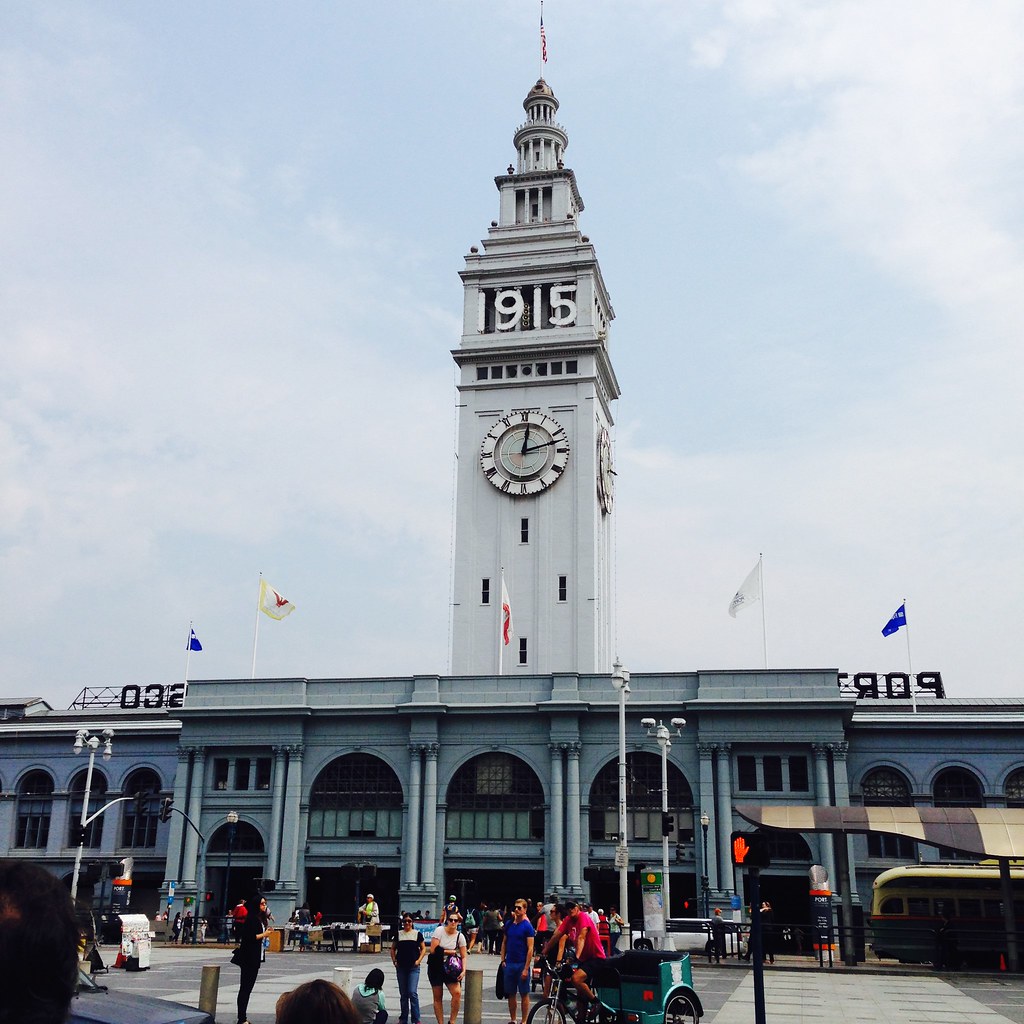 San Francisco also has a bike share program alike Seattle (well, Seattle probably copied them, whatever). It costs $9 for 24 hrs, and you can check them out for 30 min stretches, but I have severely strained quad muscles, so riding a bike didn’t seem like such a good idea. So, stroll, it was. There are a number of little eateries along the way, if you want to get your munchies in before going to the ballgame.

I would say I generally liked AT&T park. At the bleachers, it has some nice views of the bay. My friend, who attended a game some time back at the terrace level, didn’t like how he couldn’t get to certain places because of his ticket. I was mostly on the main level with my bleacher ticket, and I thought it was kinda nice. The AT&T Park children’s play area also looked cooler than the Safeco field play area.

One of the nice things about the bleacher area is that, there’s a dining area behind the bleachers. While you cannot watch the game from this dining area, it has picnic tables, and a nice selection of interesting food options (i.e. not just ballpark food) – a crab shack, a seafood stand, a BBQ place, and a taco place. I got a crab and shrimp sandwich ($13.50) from Crazy Crab, which I thought was tasty and fresh.

One small little tip about drinks at the ballpark. They do have soda machines near the kids’ play area, and they sell bottled sodas for $3, and take credit cards as well. I would highly suggest this option, if you want to save some money, but don’t want to drink water either. It is a good deal for ballparks, considering how watered down sodas in cups full of ice cost at least $5.50 usually. If you did not get a chance to see/get on a cable car, they do have a sample cable car by the bleachers. 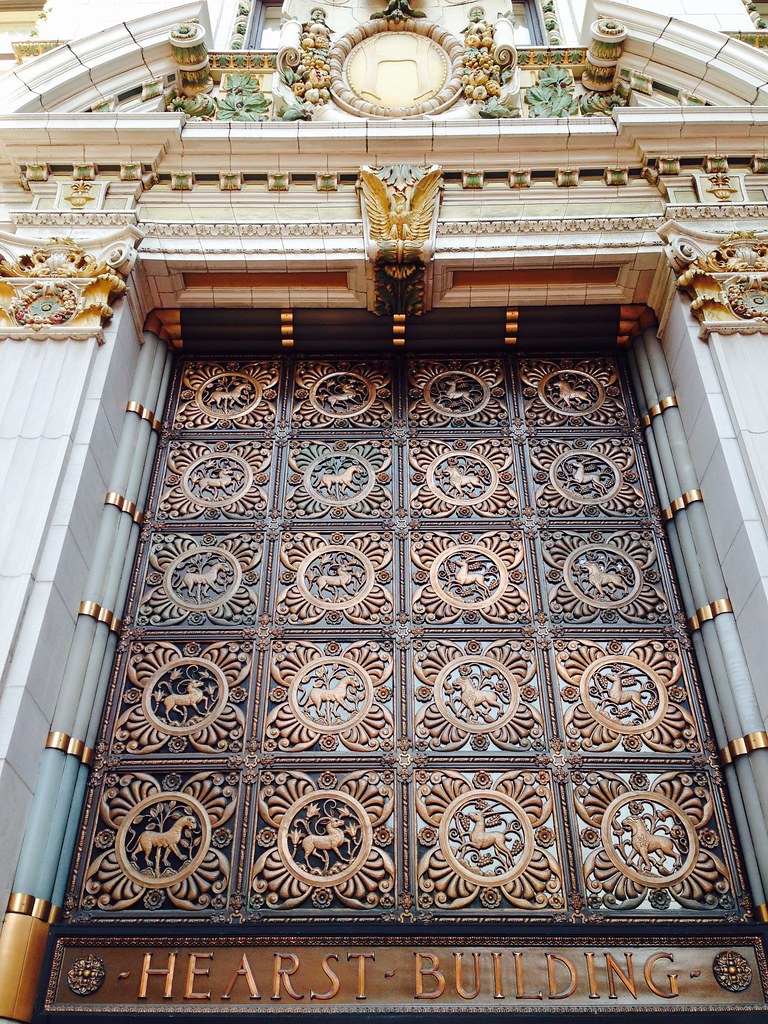 Unfortunately, after 7 innings, I had to leave, as I did want to check out other parts of San Francisco as well. I walked down 3rd Street, towards Market Street (and Mission Street further south), where the BART runs underground, as I was planning on catching the BART back to the airport. I was gonna check out a cafe, and do some writing in a cafe, but wound up at Ghirardelli chocolate cafe. Apparently, a store attendant handing out free chocolate is all it takes for me to walk into a store! In the short time that I was here, I did like the buildings clustered around Market Street. They have the early 1900s flavor, with ornate carvings, high ceilings. It is a shame that I had so few hours in San Francisco! 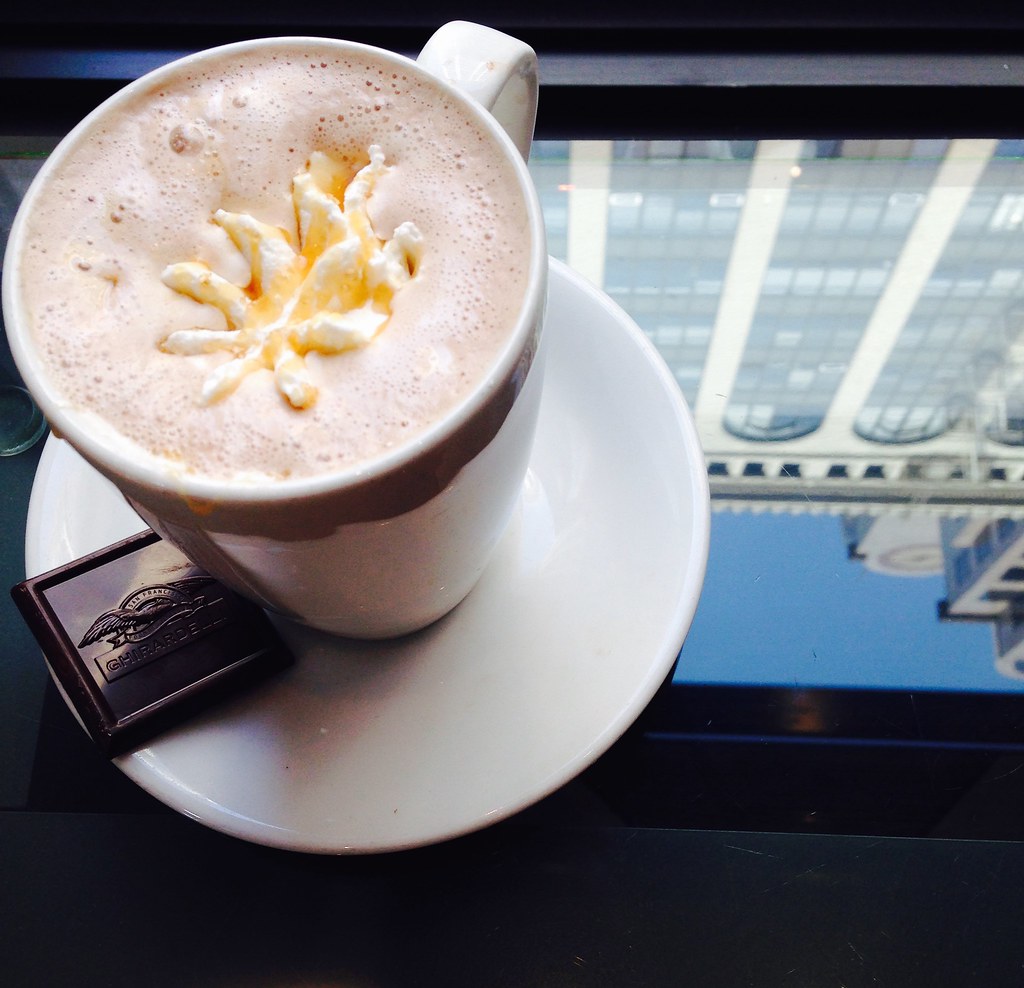