After the debacle at LAX, I still had quite a few obstacles ahead of me today – well, mostly locating all the different counters to print my various boarding passes for my onward travel, and getting a Cuban Tourist Card.

My award ticket was booked with Delta, and the kind agent at LAX booked me into a flight from LAX to SJO on Delta. But, the next segment of my flight is on Copa, a non-Delta partner, so I had to find a counter to print my Copa Airlines boarding pass to Panama City. I spotted the Copa Club at the SJO airport (near gate 4, beside the food court), and decided to try my luck, given that none of the information counters were open at this point (I arrived before 7 am). The kind ladies at the reception at Copa Club were both somewhat amused by my predicament, but at the same time, also very helpful. After a couple of minutes, I had my boarding pass, with a bulkhead seat to boot!

After getting my boarding pass, my next mission was to try and find a Priority Pass lounge to relax, grab some food, the works. I used the Priority Pass app, and there is only one lounge at SJO – VIP Lounge Costa Rica. I walked around a bit trying to locate it, and that was when I realized what a doofus I am – the Copa Club and the VIP Lounge Costa Rica share the same premises. I am going to blame this on the red-eye!

Despite reviews of the premises being small, I thought that the size of the VIP Lounge Costa Rica was somewhat proportionate to the size of SJO airport. There were probably about five group sofas, a bunch of couple seating areas, and a dozen tables with four chairs. It should easily accommodate over fifty people.

The free breakfast spread was continental. So, there were two choices of cereal, bread, and some pastries. There was drip coffee, a selection of tea, and three juices. I thought it was ok. If you want a more substantial breakfast (e.g. eggs cooked to order), and premium drinks, they have a paid option. I didn’t ask for the menu, so I have no idea how much that costs.

The wifi speed was also quite ok, and slightly faster than the free wifi in the main terminal. I stuck around until 45 minutes before my flight’s departure time.

On the way to my boarding gate, I also checked out the Santamaria VIP lounge. I didn’t get to go in as I do not have access to it, but for those who hold AMEX platinum, you can access it with your platinum card. It seems to have tarmac views. 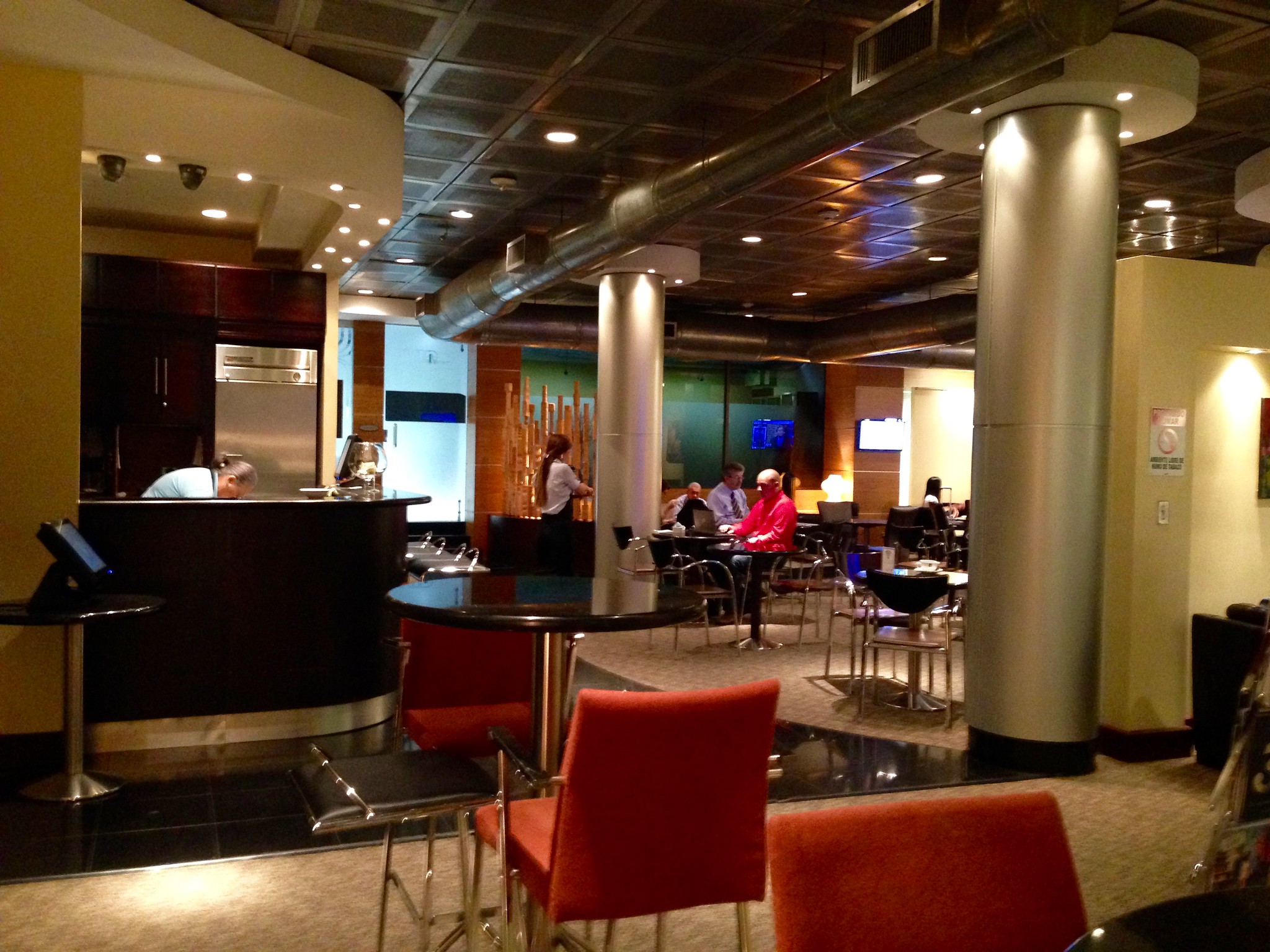 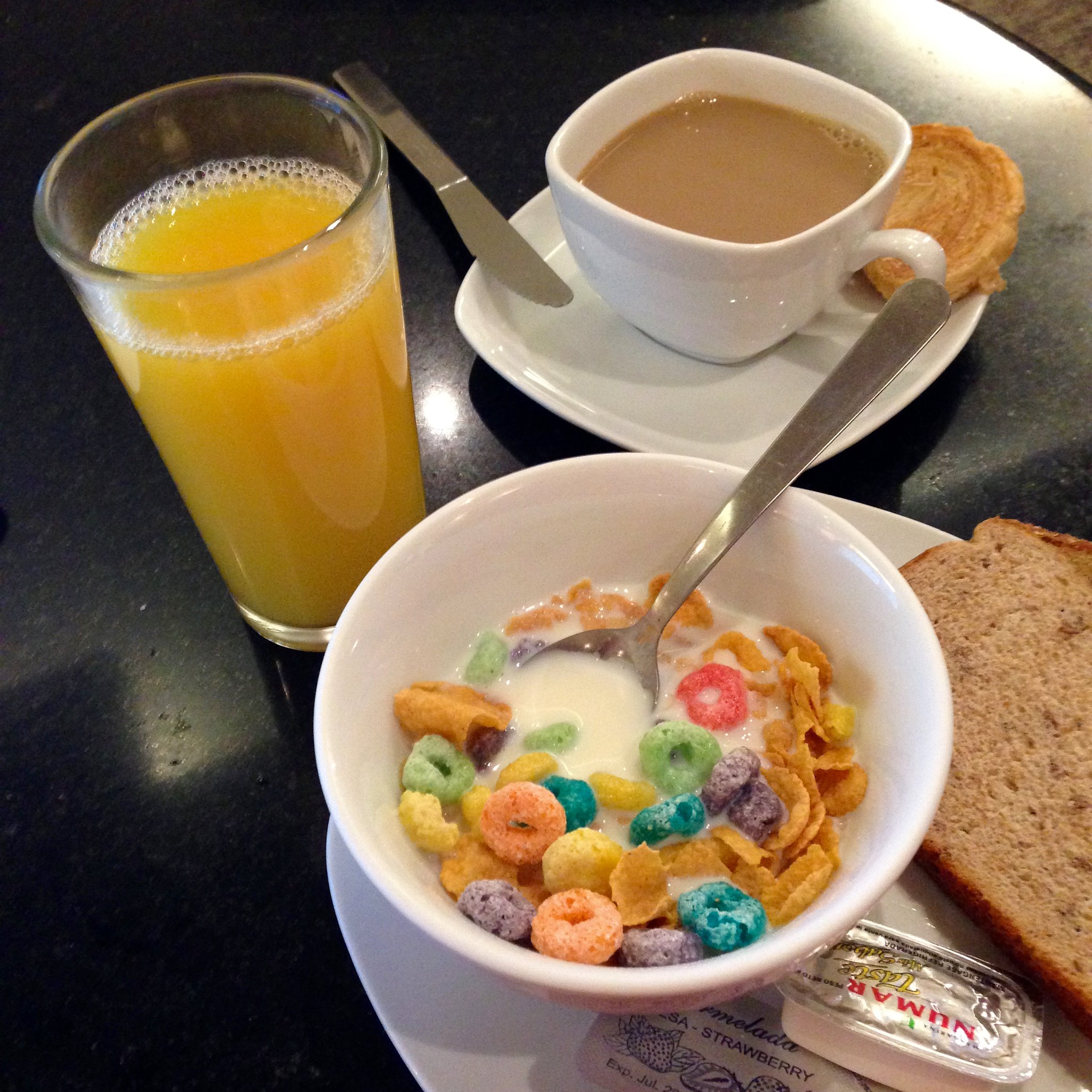 I have had some serious luck with Copa Airlines – I am 3-for-3 on bulkhead seats so far, so count me biased towards Copa Airlines. In all seriousness, Copa Airlines tends to get very under-rated in those fantasy air travel blogs, because they do not have fancy premium classes. However, it is a very solid option for economy class. There is decent legroom, and in the short one hour flight from San Jose to Panama City, they served a complementary roast beef and cheese croissant, and complementary drinks as well. Very efficient operation.

In my flight from Panama City to Havana, I had a similar experience. We flew a newer B737-800, with in-flight entertainment system installed. I did not use it (except for flight info), but they had a fairly decent selection of recent movies and TV shows. In any case, the offering would definitely suffice for many of the short-haul flights, which Panama operates. Food was once again awesome. In the short 2.5 hour flight, they served dinner, which started almost immediately after the seatbelt signs were off after take-off. The whole affair took less than half an hour, and I finished every last bit of my chicken and rice dish (the other option was pasta).

Challenge #2: Boarding pass from PTY to HAV

After arriving in Panama City, I really did not want to go through immigration and security and all that fun stuff, to check-in and get my boarding pass for Havana. A very kind security guy directed me to the information counter that is near gate 21. There is also another one between gates 24 and 25. So if you are connecting at Tocumen International Airport, and need some boarding passes printed, head over there. The agents are pretty helpful.

Tocumen International Airport is a pretty compact airport with a simple layout. So there should be little reason for anxiety when trying to figure out transit logistics. The information counter is wedged between gate 20 and gate 21, which is located right smack in the middle of the airport.

One point to note: if you are departing for a United States destination, give yourself extra time, as they have heightened security procedures.

The Tocumen International Airport has a Priority Pass lounge, but it is landside. I figured it is really not worth my effort to exit the airport and go through the whole immigration/security hoopla, so I just wandered around the airport. They do have a Club Copa Lounge near gate 20, and an American Airlines lounge near the high number gates (~30). I didn’t visit either of them.

I had a 7 hour layover at Tocumen International Airport. This is my third time here. I previously transited here twice, going to and from Lima. Since my last visit some four years ago, they now provide 2 hours of free wifi a day. Thankfully, I have a number of devices, so I just went from device to device to tap the free wifi. Signal strength varies greatly, so if you are getting zilch, consider moving to another part of the airport.

I wouldn’t say that the airport is swimming in power plugs, but they are usually located at the pillars, so power availability is decent. The default plug is the US three-pin plug.

There are plenty of little stands selling food like sandwiches, or international fast food like Domino’s, Quizno’s, Cinnabon. They also have a food court that is on the upper level. Based on my short survey, it appears that the food court has the cheapest food, even though some of the little mobile stands sell the exact same food, e.g. a 2-piece meal at a mobile Chester’s Chicken stand is $12, while a 2-piece meal at the food court’s Chester’s Chicken is $8.50.

Challenge #3: Getting a Cuban Tourist Card at the Departure Gate

Initially, I asked about this at the information desk. I was informed that I could get this at the departure gate. I didn’t hear any announcements or offerings for it. In any case, about 15 minutes before boarding, I decided to ask the gate agent about it. He took out a little folder, and asked me for $20. I handed 20 USD over, and had a Cuban tourist card in my possession.

This is some serious efficiency. I got into the airport at around 2230, and was out, with CUC in hand. Granted, I only had carry-on baggage. Despite the Business Insider article about the interns having problems arriving in Havana, my arrival and immigration clearance was a breeze. I was third person in line at the immigration counter, there were no questions asked, passport was stamped pronto, and I was done.

As I was arriving this late in the evening, I asked my Airbnb guesthouse to arrange for an airport pick up (25CUC). I was met the moment I exited, and the nice ladies of Cubanacan travel told me I could exchange some currency at the counters outside the airport. They also gave me some maps of Cuba and Havana. I returned the map of Cuba as I was just staying in Havana for this trip.

There are two currency exchange counters outside the airport. They are located on both the left and the right side of the arrivals exit. As I was just here on a short trip, I decided against trying to figure out the best exchange rates, and just rolled with cards that I was dealt with.

According to the exchange rates, the Cuban Convertible Peso (CUC) is tied to the USD. However, there is a tax on USD exchanges (10%). The exchange rate I got for my USD was around 1 USD to 0.86 CUC. I had to pay the taxi driver at the guesthouse, and it was close to midnight at this point, so …

Travel tip: Unless you are planning on spending like Richie Rich, try to ask for smaller denominations. I was given a bunch of 20 CUCs, and was given lots of dirty looks in the city, when I tried to break the 20 CUC. Even the tourist establishments operating in the CUC economy might give you dirty looks when you pay with a 20 CUC bill for a 5 CUC meal.

Travel into Havana from the Airport

I took a taxi (25CUC), which seems to be the standard rate. The Jose Marti International Airport has a site, and on the site, it states that they do not have buses. However, a cheaper option is to take the bus to a terminal near the airport, and then, take a taxi to the airport. I won’t be taking this option, so I am not sure how much you can save. I guess you can always try to taxi pool or something. 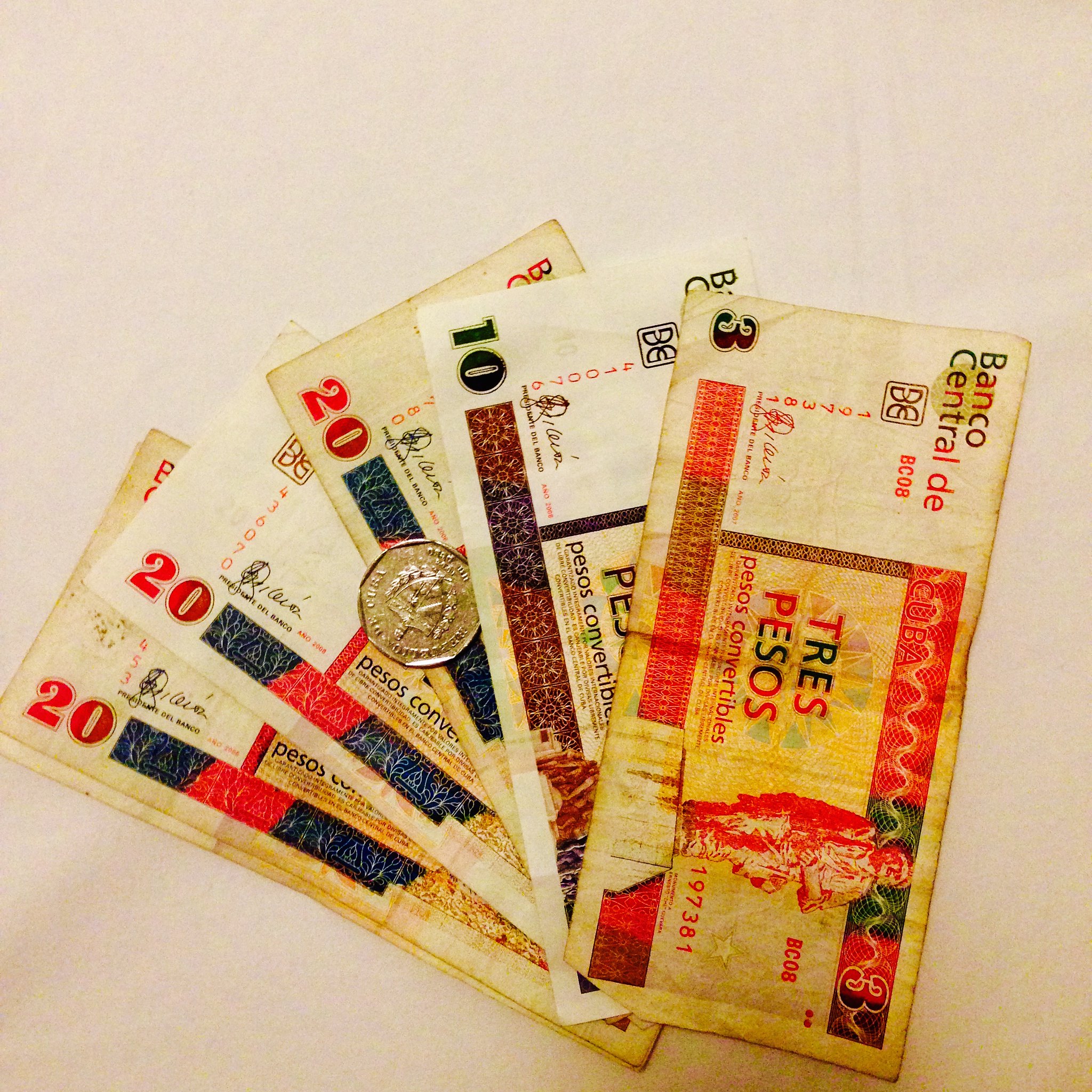 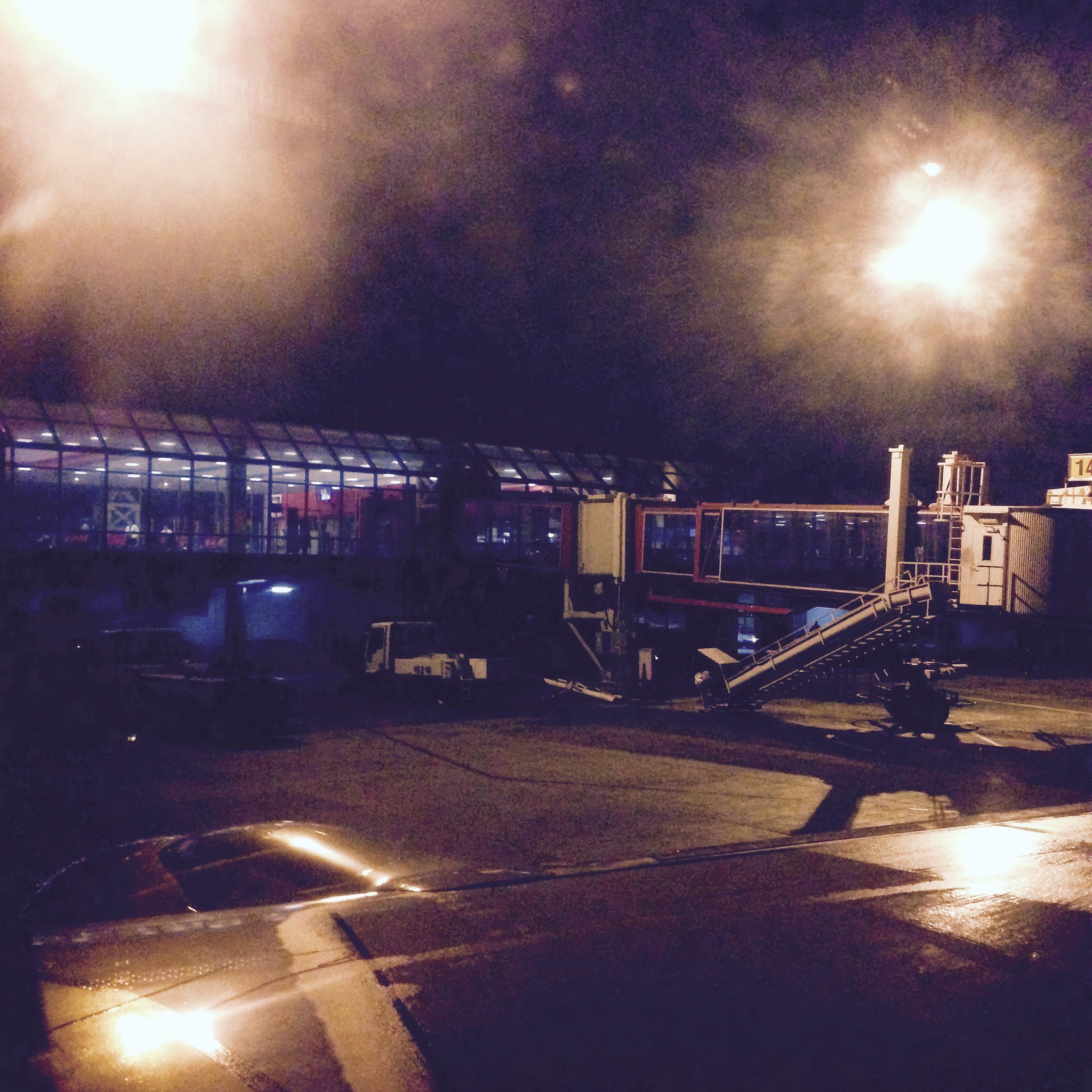 Lunch and Dinner at Tocumen: 20 USD