Today is a day-trip to Halong Bay, a UNESCO world heritage site. It’s pretty nice, especially their massive caves, though their man-made looking ceilings make me wonder what was done to them. As someone commented, their use of light is pretty smart.

Halong Bay is a little like Koh Phi Phi magnified ten times, and its surrounding islands, except Thailand has more inviting waters than Vietnam has.

Meals? I don’t think they were fantastic or anything, and they consisted mostly of vegetables, and a boney fish, making me both hungry and miserable.

Something else also happened on the boat trip; due to the low tide, the bottom of the boat scrapped against the sea bed, and for a moment, there was a little panic about the seaworthiness of the vessel. But thankfully, all were safe.

On the way to Halong, seeing the villages and the elements of village life like the horse cart, the water buffaloes is refreshing compared to the huslte and bustle of city life in Hanoi.

By the time we reached Cat Ba, it was already dark, in fact, too dark to see anything, though I observed the amusing sight of floating homes having TVs as well! Looks like the TV has gotten a foothold on the lives of the Vietnamese, as I see it everywhere I go!

Dinner was the same as lunch, though post-dinner, I had yet another of those unpleasant Vietnamese encounters, where after the beer lady says 10 000 dong, ups her price rapidly to 15 000 dong when I produce a 50 000 dong note, and she kept insisting on that price! Thankfully this time round, I wasn’t alone, and hence, I didn’t get fleeced as I have been the past few days. I wish the Vietnamese would stop doing that.

Water Villages in Halong Bay – they have TVs! 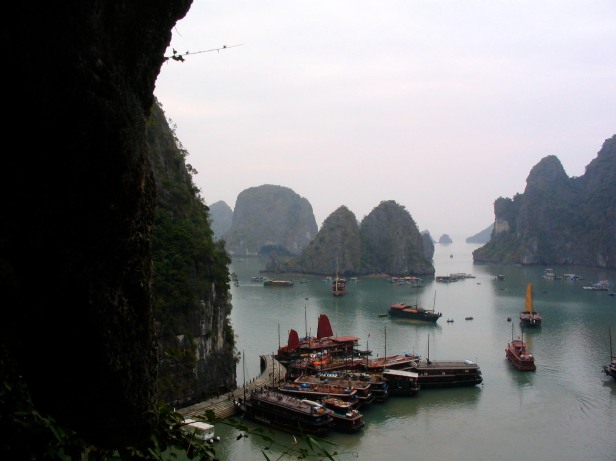 View of Halong Bay from the Cave