We had an overnight flight from Singapore, so we were pretty groggy. We took a taxi from Melbourne International Airport, and it took about 30 min, and 50 USD. Our room at Crowne Plaza wasn’t ready yet, so we left our bags, and I split from the parents. The Crowne Plaza is pretty unique in terms of its architecture. Sitting by the north bank of the Yarra River, just across from the Crowne Entertainment complex, it is made up of two circular structures. The outer circular structure are the guest rooms, giving hotel guests at different rooms a panoramic view of the Yarra River. In the inner circle, are the administrative buildings, swimming pool, restaurant etc (amenities and facilities). These two buildings are connected by a bridge. Location-wise, it’s also very central, and you’re a short walk from quite a lot of tram stations, and the outer edge of the Central Business District.

I decided that the first stop will be the Queen Victoria Market. At the hotel, the concierge told us about the free tourist tram and the tourist shuttle. The free tourist tram is amazing. It runs in a rectangle around the heart of Melbourne city, in particular, most of its city attractions. I took the tram to the Williams Street stop, and got off, before walking to the Queen Victoria Market. It is an impressive-looking market, but I guess it wasn’t too interesting for me. I did go here for a mission though – lunch! After doing the sight and line test, I decided to go Gozleme Turkish Cafe. I got me a lamb, spinach feta gozleme ($9), which is a kind of flatbread made fresh on the spot, and stuffed with goodies. As I was passing out with insufficient sleep, I also ordered a Turkish coffee ($3). I got a prime spot by the window for people watching. All in all, an excellent lunch.

After my lunch, I decided to wander around the heart of Melbourne, and just see what interests me. That did work out for me. I did get to check out lots of cool architecture, like The Celtic Club. One particular building which I found particularly interesting was the very modern Melbourne mall, which was built around the Lead Shot Factory. It was quite a feat to build a mall around this building, as it has a very tall chimney. So they had to build a reversed glass dome to house the factory. They hollowed out the building for shops to sell their merchandise.

Accommodating the Lead Shot Factory at the Melbourne Central Mall

I then turned down on Swanston Street. It was lovely strolling into some of the old arcades, some of which have some really impressive interiors, and there are many lovely art deco buildings. After going through the shopping row, I ended up at Flinders Station, and saw an outdoor acrobatic performance, which was taking place in front of the Museum of Moving Image. The rotunda at Flinders Station has some interesting mirrors to better display the roof. Since I was already in this walk, and the weather was perfect, I just continued moving on to the south bank.

Acrobatic Performance in front of the Museum of Moving Image

It definitely showcased a different aspect of the south bank. There are several different types of street performances, like street gags, some basking, portrait drawers, and mural painters. There was also a bar that was under one of the bridges. It certainly had a line!

After a brief stop at the hotel, we ended up eating at China Bar, which is an Asian/Chinese buffet with some bbq items for $69. After the very massive dinner, we took a short walk around Chinatown, which brought us through some of the theaters in Melbourne. Quite a productive day on no sleep! 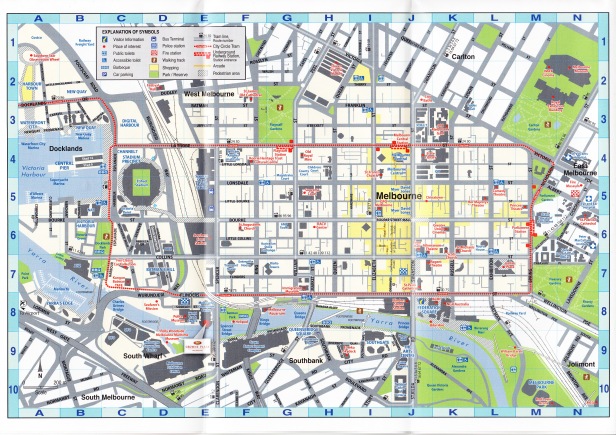